The Montreal Canadiens lost in a 3-2 shootout against a dominant Nashville Predators team. It might have been the Habs’ best game all season. It was also just the second game in Montreal for P.K. Subban since the 2016 trade that left many in the NHL scratching their heads and fans in Montreal with a broken heart. This is not about Shea Weber. For many, the Subban trade was about losing P.K. In Montreal, it is the wound that won’t heal.

Build up to the Game

In the days leading up to the game last weekend, a number of articles considered what P.K. meant to Montreal. For Eric Engels, his return is a reminder of Marc Bergevin’s failures. He wrote last week:

Now it looks like a trade that will haunt Bergevin until the end of his days, with Subban making a strong case for the Norris Trophy and being poised to lead the Predators deep into this year’s playoffs—perhaps to a Stanley Cup after helping them come within two wins of one last year. Meanwhile, the Canadiens are floundering their way towards the best crack they’ve had at obtaining the first overall pick in the draft since the spring of 2012.

Others took a different tack and pointed out how Subban remains committed to the Montreal Children’s Hospital and raised $10 million for the Hospital. Subban and his Predators teammates visited the hospital the day before the game.

Related: Return of Subban Shows What is Wrong with the Habs

For Pat Hickey, Subban’s return was a reminder of what a larger-than-life character he is. This year, Subban leads the Predators with 43 points, including 15 goals. He’s third in scoring among NHL defencemen and is plus-11. P.K.’s impressive season is generating Norris Trophy buzz. He’s also the only NHL player to visit Trevor Noah on The Daily Show.

P.K. was in the spotlight as the chants of his name started as he took to the ice at the urging of his teammates. While the cheers and chants continued from the fans in the Bell Centre early on, this would not continue. The game started with some serious hits. The Habs’ plan seemed to be to get the puck behind the Nashville defense and take the body early and often.

The resurgent Arturri Lehkonen created Montreal’s best chance and the opening goal of the game. He forced the puck off Filip Forsberg and set up  Brendan Gallagher, who had his first shot blocked by Subban and then buried the rebound for his 20th goal of the year. While the Canadiens were dominating their opponent with shots and chances, a quick pass from Pekka Rinne caught them snoozing and set up a series of passes that led to Scott Hartnell’s game-tying goal.

A third-period scramble around the net saw Ryan Johansen get the puck to Kevin Fiala who scored to give Nashville a 2-1 lead. In a key main theme of the Canadiens season, the goal resulted from a bad bounce and a defensive error.

Bucking the trend of folding like a cheap suit, the Canadiens put the pedal to the metal and tied the game late in the third period. Jeff Petry set up Jonathan Drouin for his most important goal in a Habs jersey to date.  In overtime, the Habs were magnificent. Julien started Paul Byron, Drouin and the rookie Victor Mete. Their speed created some opportunities. The next unit, Scherbak and Galchenyuk, combined for some of the most exciting opportunities all season. Pekka Rinne was better. He stopped all 10 shots he faced and sent the game into a shootout.

While the Habs couldn’t win in the end, fans saw the best possible version of this roster. With the season lost, this organization must continue to play its youth, experiment to find chemistry, and try to move forward.

If not for the comments of Brendan Gallagher following the game, the storylines of the night might have been about Pekka Rinne’s absolute dominance in the game. It might have been how fans seemed to sour on P.K., as the early cheers transformed into boos as the game intensified. Another storyline might have been how P.K., who usually brings his best to big games, was unremarkable on Saturday night. From giveaways to questionable decision-making and shaky defensive play, Subban seemed off.

Instead, the main story out of the game was the post-game comments of Brendan Gallagher. 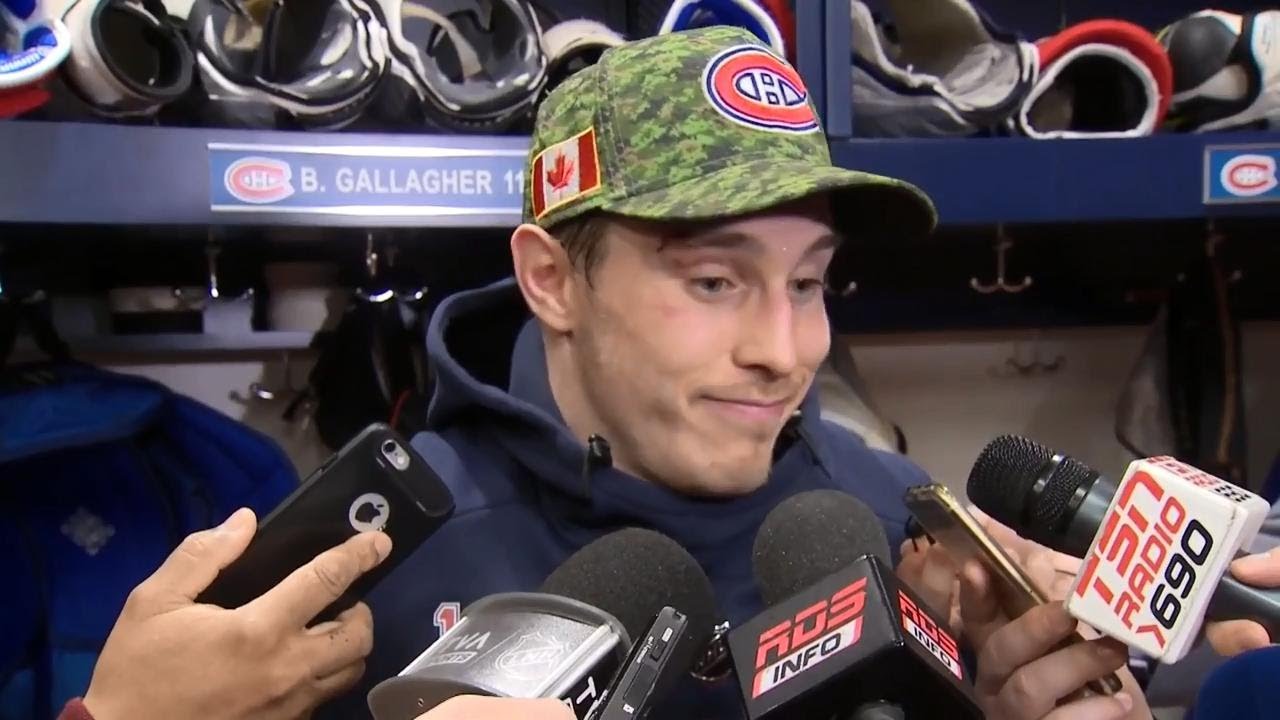 Gallagher didn’t want to talk about P.K. He slammed him three ways.

Subban responded when asked how it felt to see Gallagher smiling.

“I didn’t see a smile from him tonight, to be honest with you,” Subban said. “I just saw the blood dripping down his face after he tried to hit me and fell down. That’s what I saw … I didn’t see anything else.”

The Wound That Won’t Heal

The import of Gallagher’s comments has been a fixture of the post-game analysis in Montreal. While some are seeking to downplay their meaning, it is hard to deny the light it seems to shine on the trade and the hurt and anger many still feel.

Brendan Gallagher finally pointed out the smoke Saturday night and confirmed what everybody had long assumed, but no one actually came out and said. That the smoke stinks….That is the closest anyone in the Canadiens organization has ever come to expressing what the problem was with Subban in Montreal, which was making it about Subban.

In a week of more honesty than is normal in the NHL, Gallagher’s comments might ultimately help fans who have not yet got a straight answer to basic questions about the trade. It is now clear that it was based on personalities. Moreover, it was not merely a Subban/Pacioretty rift. This honesty, while important, is not without cost. One immediate consequence is that it pits many fans’ favorite current player, Gallagher, with many fans’ favorite former player, P.K.

In the end, Subban remains a divisive figure. He is bigger than the game. He bounces during the national anthems. He chirps at his opponents and jaws at the refs. He is constantly in motion and yes, he makes mistakes. He was also one of the most popular players to don the bleu, blanc et rouge in decades.

However, in Montreal, there is a vocal minority that cannot accept that other fans remain heartbroken. No Twitter interaction about P.K. can go more than a few tweets before someone dismissively tweets: “get over it.” Yet, after a disastrous season, trying to put the 2016 trade behind this team is not yet possible. As Connor Lapalme concludes:

Ironically, this may have begun last Saturday. As the cheers and chants for P.K. turned to boos as the intensity of the game increased, we may have seen a glimpse of how Montreal might be able to move on. Right now though, losing P.K. remains the wound that won’t heal.