The Norfolk Admirals continued their surge towards the playoffs Friday night against Eastern Conference leader, the Syracuse Crunch. The Anaheim Ducks bolstered the Admirals offense assigning 21-year-old Kyle Bonis, a forward, who jumped on the roster after Ferris State’s season came to a close. In addition, the Admirals picked up 21-year-old Charlie Sarault, a left wing, who was reassigned by Anaheim when his OHL season ended with the Sarnia Sting.

Frederik Andersen started in net for Norfolk while former Admiral Riku Helenius took his position in-between the pipes for Syracuse.

The Syracuse Crunch lit the lamp first just minutes into the game. Second-year pro Brett Connolly scored his twenty-seventh goal of the year. Connolly’s point blank shot snuck past Andersen’s stick pulling the Crunch ahead by one.

Admirals assistant captain Patrick Maroon answered the Neilson goal with seconds remaining in the first. Maroon angled his wrist shot around Helenius collecting his nineteenth of the year. At the end of the first, the Crunch had the say so in shots with thirteen while the Admirals trailed with seven.

The game remained two to one with one minute left in the second period.  ECHL call-up Alex Hutchings found a loose puck in front of Andersen and buried his third AHL goal of the season. As the middle stanza came to a close, Syracuse repeated what they did in the first out shooting Norfolk twenty-one to sixteen.

Former Duck prospect Dan Sexton scored the Crunch’s fourth goal just ten seconds into the third. Sexton’s seventh goal of the year came by the way of a tape-to-tape pass via J.T. Brown that Admirals netminder Frederik Andersen was unable to stop.

With a blink of an eye, the Admirals cut into the lead as Devante Smith-Pelly scored on a tic-tac play. Brandon McMillan saucered a pretty pass to Smith-Pelly who collected his eleventh goal on the season beating Helenius on his glove side.

Chris Wagner fed off the Smith-Pelly goal as he broke away from the play seconds later beating Helenius one on one cutting the Crunch’s lead to a single goal bringing Norfolk within one. 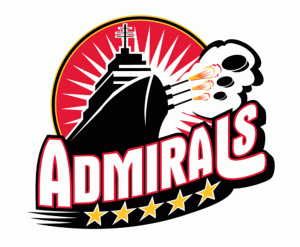 The teeter totter game continued with an Admirals P.P. goal. Nate Guenin bombed a shot from the point. Patrick Maroon tipped in the Guenin bomb scoring his second goal of the night tying the game at four while scoring his twentieth goal of the year. With only seconds remaining in regulation, Crunch captain Mike Angelidis was whistled for a penalty which swung momentum in Norfolk’s favor heading into overtime.

Patrick Maroon took Helenius to the bank on the P.P. beating him for the third time sealing an Admirals five to four victory in overtime. Norfolk and Syracuse ended the game with thirty shots apiece. Norfolk shutdown all of Syracuse’s P.P. opportunities while cashing in on two power play opportunities of their own. Patrick Maroon and Company handed Helenius his thirteenth loss of the year while Andersen picked up his nineteenth victory of the season.

“The two-year deal is a big thing for me,” Maroon said. “It’s my first one way contract I’m fortunate to be in the Anaheim Ducks organization again. I’m excited to get a chance to play in the NHL, but I’m a Norfolk Admiral right now and I’m excited to make this playoff run.”

After the game head coach Trent Yawney commented on newly acquired talent Charlie Sarault who also had an assist on the game winning goal and his ability on the powerplay.

“You look at his statistics in the OHL. He had a lot of assists. You can see he has great vision and wants the puck. That combination could be deadly at times. He knows what he is doing on the power play.”

Sarault also gave his thoughts about his first game.

“I was just trying to keep the game simple and trying to juggle all the systems. A bit nervous, but I think we did well as a team.” Sarault also commented on the rivalry atmosphere saying, “Just being in the room hearing this was their building before. You could tell the guys really wanted to win this one.”

“You can see he is an intelligent player and a good skater. He had some good chances, too. I think he handled himself very well in his first game.”

Sarault and Bonis along with the rest of the Admirals look to sweep the weekend set against the top seed in the Eastern Conference Saturday night at Scope Arena in downtown Norfolk. The puck drops at 7:15.