The NHL is very much a “what-have-you-done-for-me-lately” type of league.

After going 0-3 to start the year, the Philadelphia Flyers canned coach Peter Laviolette.  Many fans wondered why Paul Holmgren didn’t join him.  Not only did Holmgren not get let go, Peter Luukko gave him a vote of confidence as Flyers fans watched in bewilderment.

I’ll be frank with you.  I wanted Paul Holmgren fired last season when the team was down in the dumps.  I’ve been adamant about him being replaced for some time now.  The team is atrocious – there is no denying that.  The team is selling out every game, the fans pay good money, and in return they are watching their beloved franchise slowly harken back to the dreaded 2006-07 season.

However, the more I look at things from an overall perspective, I don’t think Homer should receive his pink slip just yet.  Here’s why:

If you take a look at what this team has accomplished under Paul Holmgren as Flyers general manager, you’ll notice he’s been quite successful – believe it or not.  He took over in 2007 when the team was going through it’s worst season in its 40-year history.  The following year, Holmgren shuffled the roster a bit and the team ended up making the Eastern Conference Finals.

Fastforward to 2010 when the Flyers were within one game of winning the Stanley Cup Finals after making it into the postseason.  Not including 2006-07, Homer’s Flyers have missed the playoffs only once (2012-13).  In a seven year span, that’s far from terrible.

Patience is a virtue

One thing I’ve always commended Paul Holmgren on is his ability to not make irrational decisions in the heat of the moment.  In 2010, when both Ray Emery and Brian Boucher went down with injuries, fans freaked.  Homer bided his time, didn’t make any rash moves, and looked to see what Leighton could do.

We all know what happens next, but if you would’ve told me that Michael Leighton could get the Flyers to Game 6 of the Stanley Cup Finals I would’ve thought you were drunk…and that’s exactly what happened.

In last year’s shortened, the team began to flounder, but once again Holmgren was cool, calm, and collective.  Although the Flyers didn’t make the playoffs, they ended the year on one of the best runs of any team and were within six points of the postseason.  Had the season stretched out to a full 82 games, chances are the Flyers would be in the mix for a playoff spot.

If you are expecting the Flyers to make a big trade or two in the coming weeks, you may want to think again.  Homer’s not one to jump the gun. 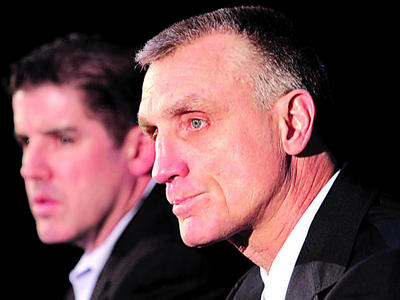 Do GM’s get raked over the coals in some trades?  Sure.  It’s the nature of the business.  You can’t win every trade you make.  Paul Holmgren has had quite a few questionable – the Versteeg trade, the Eminger trade, the Bobrovsky trade.

But he has pulled a rabbit out of his hat on more than one occasion.  Homer was able to get Chris Pronger, who ended up being the team’s sole leader before going down with an unforeseen injury that would later knock him out of the NHL for good.  Be that as it may, the time he spent in the Orange and Black did wonders for this franchise.

Somehow, Homer was able to flip a 1st round pick to the Nashville Predators for both Scott Hartnell and Kimmo Timonen.  Both are slumping currently, but they were catalysts for a team in need of a jolt for the past six years.  Lest we forget the impact they had early in their Flyers’ careers.

Holmgren outright stole Braydon Coburn from the Atlanta Thrashers in a deal where he traded Alexei Zhitnik.  That would be the first of many boneheaded trades Don Waddell would make before the Thrashers would eventually fold.

The trade that probably goes most unnoticed was a deal Homer made with the Detroit Red Wings.  Prior to the 2010 trade deadline, the Flyers dealt Ole-Kristian Tollefsen and a 5th-round pick to Detroit for Ville Leino.  Leino didn’t click in Philadelphia immediately, but once he played his first game in the playoffs, he – along with Scott Hartnell and Danny Briere – was magic.  They went on to form the most dangerous line in the playoffs.

This Flyers team should be much better than their record indicates.  They have a formidable lineup, with a few holes on defense that should’ve been fixed in the offseason.  But even with the current defensive situation, the offense should be driving this team.  To put it mildly, the squad is having trouble finding the back of the net.  Now is that really Paul Holmgren’s fault?

The job of a general manager is to assemble a team and coaches that are capable of competing on a nightly basis.  What they actually do on the ice is beyond a general manager’s control.  I could understand an argument if Paul Holmgren was out on the ice every night showing a lackluster effort, but most of the blame rests on the shoulders of the players he pays to perform.

More blame should be placed on the coach for not inspiring the team night in and night out, however, since the team is under new leadership with Craig Berube, it still needs some time before all the kinks are worked out.  Changing coaching systems isn’t the easiest things for player to do on the fly, you know?

Don’t think Paul Holmgren gets off scotch free here.  I was never a fan of the Bryzgalov signing.  I knew he wouldn’t play as well behind Dave Tippett’s defensive system in Phoenix.  I also knew he needed to fill the defensive holes on this team this offseason – and instead signed Vincent Lecavalier and Mark Streit.  Paul Holmgren has made some questionable calls, but in the long run, he’s been a very good general manager for the Flyers.

If by season’s end this team isn’t in the hunt for the playoff spot, then I’ll go along with the rest of the fans in calling for his resignation, but let’s give it some time.  There is still over 60 games left to be played.  For now, let cooler heads prevail.