The Pittsburgh Penguins need to bring in another top six forward. General manager Jim Rutherford has already stated that the upcoming free agent class is quite weak, but that does not mean there are not a few quality players about to hit the open market.

One of those is the Los Angeles Kings’ forward Justin Williams. The 33 year-old wing has been an integral part of the Kings since 2008-2009. This past season Williams appeared in 81 games, scored 18 goals, assisted on 23 more for a total of 41 points and was a plus 8 skater.

Williams and the Penguins almost were a union earlier in this season, but Olli Maatta’s shoulder injury forced them to not execute. The rumored trade was involving Justin Williams and Pittsburgh’s defenseman Paul Martin. However, after defensive injuries, the Penguins had to walk away from the trade, despite desperately needing Williams’ help.

He has been a member of the Kings for quite some time, but his contract is expiring. Williams was signed to a four-year/$14.6 million dollar contract, which had an annual cap hit of $3.65 million.

The Penguins will have some salary cap room to play with as defenders Christian Ehrhoff and Martin both are unrestricted free agents. The departure of those two alone will free up over $9 million in cap space.

But Pittsburgh must be cautious, former GM Ray Shero gave Chris Kunitz and Pascal Dupuis large contracts in their mid-thirties and they have slowed down dramatically.

It the Penguins want to make a run at Justin Williams without being stuck with another aging veteran player, they need to keep his contract duration short.

Ideally the Pens would be able to sign Williams to a two-year/$6-8 million dollar contract with a cap hit under $4 million per season.

Addressing One of the Penguins Biggest Weaknesses

Head coach Mike Johnston loves his puck possession system and Williams would fit right in. Take a look at his HERO chart, courtesy of Own The Puck. 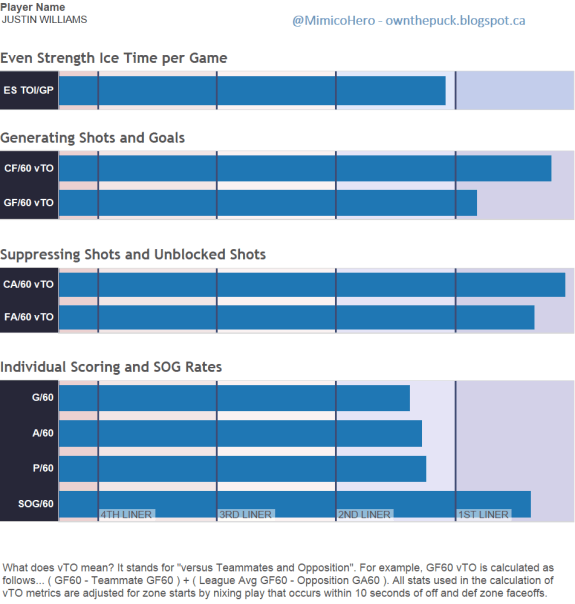 The Penguins have had issues with puck possession and Williams is one of the best in the NHL at driving possession. He is capable of playing alongside star players, he is a Conn Smythe winner and capable of scoring 20 goals a season.

During the Kings’ last playoff run that ended with the hoisting of the Stanley Cup, Williams produced 25 points (9 goals and 16 assists) in 26 games played.

Like it or not, Pittsburgh’s Stanley Cup window is closing. Mainly because their star players in Sidney Crosby, Evgeni Malkin, Kris Letang and Marc-Andre Fleury all are getting older and suffering more injuries.

If one thing has been proven in the last two years, it’s that the Penguins falter when their core players are not healthy and playing. Even missing Letang and Malkin playing hurt at the end of this season crippled the team.

Could Williams production slow down drastically like Chris Kunitz’s did this year? Absolutely. But Williams is worth the risk and Pittsburgh’s management will prove to their fans they are still committed to winning a Cup.

Adding Williams wouldn’t be the easiest move and many believe that the Penguins have the prospects to replace their free agents, but they do not have enough. Letting most of your free agents walk and expecting that prospects can make the jump, is not a proven way to win the Cup.

Pittsburgh must rely on a combination of veterans and youth to make a serious run. There will be a lot of personnel changes this offseason, but the Penguins must consider and try to negotiate with Justin Williams.