I’ve started a few articles this way before, but the Philadelphia Flyers have a very good problem on their hands. They have a plethora of young defensive prospects that all, not only have high ceilings, but project to be regular NHL players in the near future.

One of those young defenders is the absolutely massive Samuel Morin. I saw him play against the Wilkes-Barre/Scranton Penguins in a 3-0 loss. But the play of Morin really stood out to me. 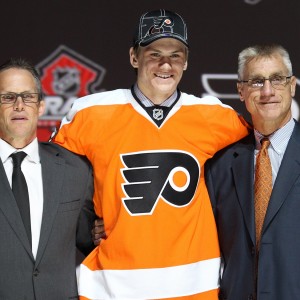 Standing at 6’7″ you know when Samuel Morin is on the ice, and despite only being a few inches taller than most other players on the ice, he looks much larger.

He was drafted 11th overall in the 2013 NHL entry draft and is never was and never will be a huge point producer. However, what Samuel Morin does bring to the ice is solid defensive and physical play. Through 58 games with the Lehigh Valley Phantoms, Morin has scored three goals, 12 assists, has 84 penalty minutes and is a minus-6 skater.

The 2015-16 season is Samuel Morin’s first season playing professional hockey and it’s gone very well for the most part. My take is he moves the puck fairly well, plays sound defensively, but he’s also guilty of taking a lot of penalties and for as well as he moves the puck, he turns it over quite a bit.

Morin has a high hockey IQ and sees the ice well, but he needs to work on his puck control and needs to get his feet moving faster.

I spoke with an NHL pro scout at the Phantoms 3-0 loss to the WBS Penguins. Before I go any further, NHL scouts have a rating scale for prospects, and it’s absolutely subjective, but the scale goes A-F, with A rated prospects being the highest possible.

Here’s what the scout had to say about Morin.

I look at a guy like Samuel Morin and I see that he has all the tools to be a defensive defender in the NHL. Despite the movement towards smaller, puck moving defenders, there still is a place for bigger, shutdown defenders. And that’s the type of player I project Morin to be, this is only his first year as a pro and he’s progressed nicely. The biggest issues I’ve seen have been his turnovers, slow foot speed and not using his large frame to his advantage. All things consider, I’d still consider Morin an “A” prospect. I doubt he will be in Philadelphia next year, but the Flyers have a few years to figure out what they want to do with him.

Almost all feedback has been positive for the Flyers young prospect. Is he a perfect and truly complete defender yet? No he’s not, but he’s only 20-years old and in his first season in the AHL. I saw Samuel Morin play a few weeks ago against the Springfield Falcons and I can truly say I saw a difference in his play in just a few weeks, he’s improving and that can only be an encouraging sign for the Flyers.

Thanks for reading! Feel free to leave your comments below or tweet me anytime @MPityk_PHI