The Phoenix Coyotes have done it again. For the third straight season, they have beaten the odds and secured a playoff berth. Most writers and analysts ruled out the possibility of the Coyotes reaching the playoffs for a third straight year after they were forced to trade away star goaltender Ilya Bryzgalov last summer. However, the play of Mike Smith in net and the resiliency and toughness of this roster has ensured that not only have the Coyotes made it into the postseason once again, they have also won the first division title in franchise history.

Playoff qualification was secured in anti-climatic fashion as a Dallas loss on Thursday handed Phoenix a playoff spot before the Coyotes played their final two games on Friday and Saturday. However, the division title was very much left in their hands and the pleasure on Saturday night when they completed a 4-1 victory over Minnesota was very apparent. The Coyotes have battled against the expectations, through adversity and their final place is especially impressive considering the fact that they started February in 12th place in the West and looked like they would drop out of the playoff race altogether. Preseason expectations were set to be vindicated as a tough Western conference looked like it would be too tough for the Cinderella story from the previous two seasons to be repeated.

Dave Tippett’s team are no longer a Cinderella story, but perhaps that will actually be to this team’s benefit. Hockey on the desert is enjoying its most successful stint since making the playoffs in each of its first four seasons. They enter their third consecutive postseason on a five-game winning streak. Being in good form hasn’t served them well in the last two years when they were ousted by Detroit, but there is a genuine feeling that the Coyotes will enjoy a better match-up against offensive minded Chicago. 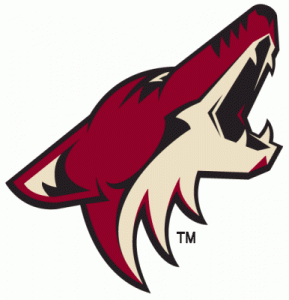 Phoenix haven’t won a playoff series since arriving in Arizona. The odds in the build up to their series against the Blackhawks will probably favour the 2010 champions, who finished with more points in the regular season and enjoy the benefits of a star studded line-up headed by the likes of Duncan Keith, Jonathan Toews, Patrick Sharp, Brent Seabrook, Marian Hossa, Patrick Kane and more. The odds will be stacked against Phoenix once again, but that’s the way that Tippett and his roster will like it.

There are lots of reasons to believe that the Coyotes can outmatch Chicago in the first round. Mike Smith has conceded just two goals in the last five games, Phoenix has gone 20-6-5 since Feb 1. The defense has been bolstered by the emergence of rookie Oliver Ekman-Larsson, while Tippett has a legitimate go-to offensive line at his disposal featuring 35-goal scorer Radim Vrbata and near point per game man Ray Whitney.

Since Tippett took over the coaching helm in a very difficult situation in September 2009, Phoenix has been in the business of beating the odds time and time again. The lesson that NHL fans should have learned over the last three seasons? Think twice before you bet with the odds when the Coyotes are involved.