The Avalanche had erased a three-goal deficit to tie the game going into the third when Hornqvist went to work.

His power-play goal 6:11 into the final period gave the Penguins the lead. Hornqvist beat Semyon Varlamov again just 1:21 later to push Pittsburgh’s advantage to two, and the veteran from Sweden completed the hat trick on his next shift when he fired a wrist shot by Varlamov less than 90 seconds later. 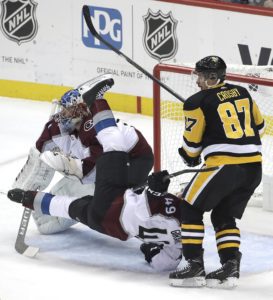 The two stars went scoreless in the rematch, taking a backseat to Hornqvist.

The Penguins needed just 7:27 to build a three-goal lead. Guentzel redirected a feed from Letang with his left skate just 2:46 in. Malkin followed just over four minutes later when he jammed home a shot from the point by Tanner Pearson for his first five-on-five goal since Oct. 30. Brassard beat Varlamov 35 seconds later and Colorado’s hot streak appeared to be in serious jeopardy.

Pittsburgh then caught a break when a goal by Colorado’s J.T. Compher was overturned on a coach’s challenge when officials ruled Soderberg interfered with DeSmith.

Still, the Avalanche managed to fire 18 shots at DeSmith in the opening 20 minutes, a hint at the flurry to come as Pittsburgh’s seemingly comfortable advantage vanished in a span of 5:01.

Barrie’s power-play shot from the point 8:16 into the second gave the Avalanche momentum. Ian Cole, playing in Pittsburgh for the first time since helping the Penguins win consecutive Stanley Cups in 2016 and 2017, fired a knuckler toward the net that Soderberg managed to get a stick on and deflect past DeSmith.

Nieto found a gap with the Penguins on the power play to slip the puck by DeSmith to tie the game, the seventh short-handed goal allowed by Pittsburgh this season.

Hornqvist, one of the best net-front players in the league, collected a Letang rebound, spun around and whipped a shot by Varlamov 6:11 into the third to start a burst that ended with hats raining down from the sell-out crowd, and Colorado’s attempt to match the franchise record for consecutive road wins set during the 1998-99 season was over.

Colorado: Begins a two-game swing through Florida on Friday when they play the Panthers.

Pittsburgh: Welcome the New York Islanders on Thursday. The Islanders won the first meeting between the two teams this season in a 3-2 shootout on Nov. 1.