Since breaking into the NHL with the Pittsburgh Penguins in 2015-16 and leading them to their fourth Stanley Cup championship, in the absence of Marc-Andre Fleury, Matt Murray has been both praised and ridiculed. Most of the praise is deserved – how many NHL players can say they hoisted their second Stanley Cup in their rookie season? – and much of the ridicule stems from the fact that Murray is not Fleury, and approaches the game in his own way, different than what modern-day fans have grown to expect in the Penguins’ crease.

Coach Sullivan confirms that Matt Murray will get the start in net tonight vs. Boston. “We think he has been playing exceptionally well. He gives us the best chance to win… He wants to be the guy. He is a competitive kid.” pic.twitter.com/Ny5RPzY6Yr

But, with just one year left on his contract, and a tight race for the Penguins’ 13th-consecutive playoff appearance, it’s time to ask the tough question: Can the Penguins rely on Murray in the long run?

In October 2016, following the franchise’s fourth Stanley Cup victory, spearheaded by Murray who started 21 of the team’s 24 playoff games and tallied 15 wins, he signed a three-year contract extension with the Penguins for $3.75 million a year through the 2019-20 season. The 2019-20 season is just seven months away, so it’s time to start preparing for the future. 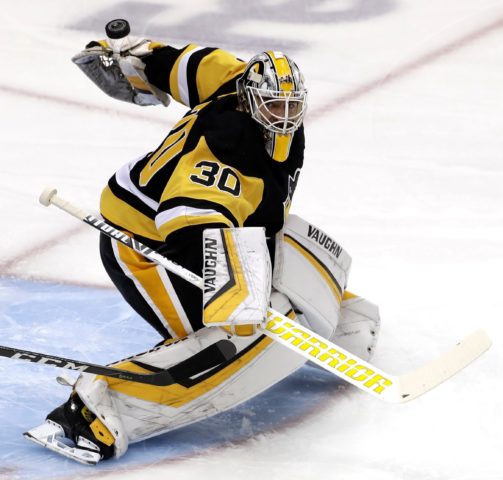 Murray’s performance during the rest of the 2018-19 season and in the playoffs will influence management’s decision to either extend his contract, play the restricted free agent game or, in an unlikely move, put him on the trade block over the summer or next season.

The Murray vs. Fleury debate had been overplayed, but in terms of the performance the Penguins have grown to expect from their goaltenders, there is no other comparison. Fleury played for the Penguins for 13 seasons and was the only starting goaltender they had employed since the 2004-05 lockout until Murray.

Coincidentally, the Penguins have also never missed the playoffs in the post-lockout era, and have won three Stanley Cups in those twelve years. Fleury played a role in all three victories, while Murray had a hand in two of them.

Marc-Andre Fleury and Matt Murray both contributed to the Penguins’ back-to-back Stanley Cups in 2016 and 2017. (Ed Mulholland-USA TODAY Sports).

Murray’s playoff ability isn’t in question. His two Stanley Cups in three postseason appearances and a trip to the second round when the Penguins lost to the Cup-winning Washington Capitals in 2018 proves that he shows up from April to June. It’s how he shows up from October to April that’s a concern.

Murray has never played 50 or more games in the regular season. In both 2016-17 and 2017-18, he played 49 regular-season games, just eight games over half a season. This season will be no different. If Murray plays all 12 remaining games — including back-to-back home games next weekend — he will hit 50 games for the first time in his career.

To put in perspective what the Penguins expect from a healthy starting goaltender, Fleury generally played between 64 and 67 games, or over three-quarters of the regular season, plus playoffs. Murray has not been healthy, though. In four seasons, he has suffered 13 noteworthy injuries, two of which required him to be put on injured reserve (IR). (awkward transition) 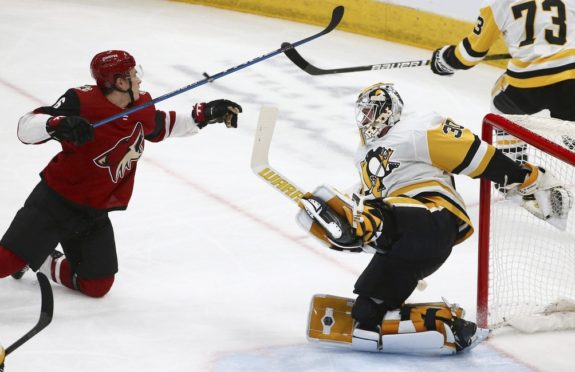 Injuries are a part of sports, but they also affect a player’s rhythm. It’s hard to get into a groove when you’re sidelined for a few games at a time and have to put more effort into rest and rehab than working on making saves on the glove side. In addition to injuries, Murray has also missed time because of personal matters, like the death of his father last year, an event that can affect any person, not just an athlete, for years.

Fleury faced a situation years ago when his thoughts affected his ability to perform on the ice. Knowing that mental blocks can be just as real as physical injuries, he enlisted the help of a sports psychologist to move past the problems. Maybe Murray will follow this example in the future if he continues to experience breaks in his rhythm and concentration.

Can Murray String Wins Together?

Though Murray’s flow has been interrupted on multiple occasions, he does have 23 wins in 38 games this season, meaning he’s won approximately 61 percent of the games he’s played.

Winning over half the games you play sounds respectable, but is easier to achieve when you play fewer games during the season. A goaltender who wins three out of five games or 50 out of 82 games could hold the same stat, with the last figure being the most impressive.

The struggle then cycles back to getting into a rhythm and stringing wins together, which builds confidence and morale for the entire team. This is an aspect of the game with which Murray struggles but is not incapable of achieving. 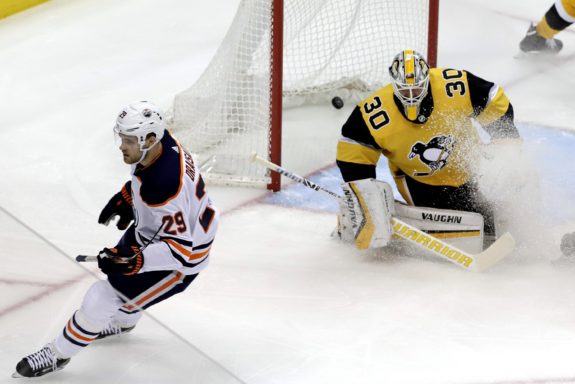 Prior to being placed on IR earlier in the season, Murray put up six losses between Oct. 30 and Nov. 17.

After returning from IR rested and healed, Murray put up nine consecutive wins from Dec. 15 to Jan. 11. This type of performance is the kind the Penguins are looking for to gain points in the tight Metropolitan Division playoff race.

Finally, from Jan. 15 to Feb. 26, Murray posted an alternating pattern of one win, one loss, over 12 games played. The wins are important, but when they are immediately followed by a loss, especially for an extended period of time, a rise-fall effect is created and, like injuries and mental blocks, it can disrupt a team’s flow. 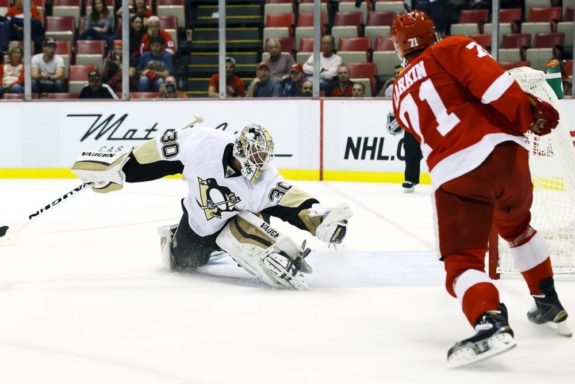 However, a goaltender is not always the make or break reason for a loss. Murray can’t take the brunt of the blame for a game like the Feb. 5 loss to Carolina where the Penguins’ offense couldn’t score a goal.

In other cases, like the Penguins 4-1 loss to the Columbus Blue Jackets on Mar. 9, Murray put on one of his best performances of the season so far but the offense had a hard time getting anything past Sergei Bobrovsky, and an empty net goal made the game look more lopsided than it was.

Therefore, a game might go down as a loss in Murray’s statistics, despite a strong individual effort. He’ll then have a problem stringing wins together on paper, but his personal performance on a game-to-game basis is something that needs to be factored into the weight of his value for the team.

Could DeSmith Take the Lead?

While Murray has been sidelined with injuries, backup goaltender Casey DeSmith has stepped in for the Penguins. He started 29 games and played in 34 this season, four less than Murray, and amassed 14 wins. In only his second season, DeSmith is a reliable backup. He can step in when called upon, make some highlight reel saves, and keep the team in the hunt when necessary. But he’s not a starter, yet. 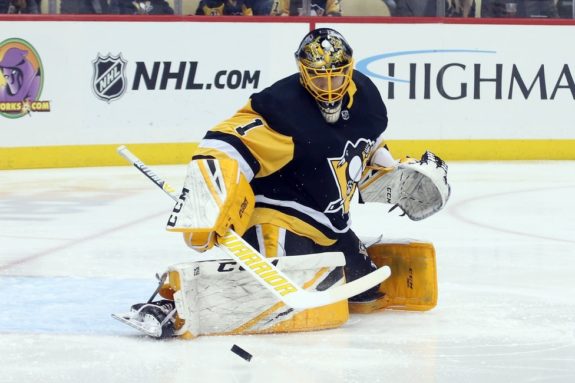 Murray hasn’t been playing up to the caliber of what the Penguins expect from a starting goaltender either. If anything, he has shared goaltending duties with Fleury, DeSmith, and Tristan Jarry for the last three seasons, based on the number of games played and his win statistics.

Even though DeSmith signed a three-year contract extension in January, he won’t move into the top spot anytime soon, the way Murray pulled ahead of Fleury in 2016. If Murray would leave the Penguins for any reason, management would probably look for a starting goalie and keep DeSmith as a backup.

Given that the Penguins are still in the hunt for the playoffs this season, and despite all of Murray’s injuries and occasional inability to string wins together, he is still a reliable goaltender.

He’s no longer the shiny new rookie in 2016 who took the playoffs by storm and caught the eye of the Penguins’ coaching staff and management, but he’s still an average, if not above average goaltender, and he earns a salary equivalent to his performance. 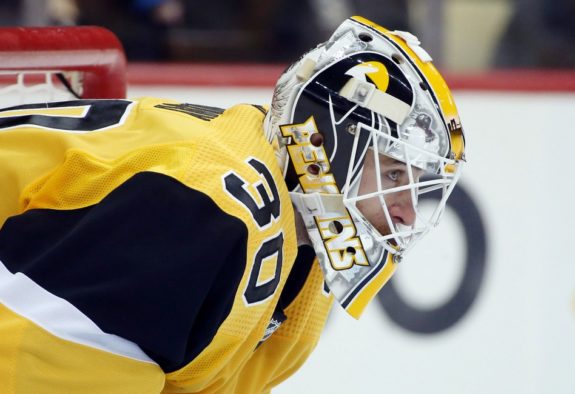 Matt Murray is still reliable, though not the same superstar goaltender from the 2016 Stanley Cup Playoffs. (Charles LeClaire-USA TODAY Sports).

The Penguins have been spoiled in that they haven’t needed to discuss the future or stability of their goaltending in 13 seasons. Even the transition from Fleury to Murray was a question of who will be the starter, not what will happen next? Had there not been an expansion draft in 2017, Murray could have benefited from either backing up or sharing duties with Fleury for a few more seasons and learning from him. That case was not meant to be, and, as a result, many people view Murray’s performance negatively because it is compared to that of Fleury.

Murray, himself, understands that his role is not to be the next Fleury but to be the best version of himself each night. In 2017, he told the Pittsburgh Post-Gazette’s, Jason Mackey:

“My day-to-day thought process isn’t to fill Marc-Andre Fleury’s shoes. If I’d do that, that would be reaching too high. I’m just going to be myself and do what I know how to do, try to take care of what I need to do to be successful,” (from ‘Matt Murray opens up about Marc-Andre Fleury, Stanley Cups and his future,’ Pittsburgh Post-Gazette – 8/12/17).

It’s easy to forget that Murray has only been in the league for four seasons, because of his early success. While he wasn’t a fluke or a one-hit-wonder, he does still have years of learning ahead of him, and the Penguins should be mindful to keep testing him, as well as encouraging him to get better, and extending his contract past the 2021-22 season.

But management, and especially the fanbase, won’t wait forever. Murray is worth an extended chance to prove himself, but if he can’t produce, there’s always the trade market.