Both the Chicago Blackhawks and the Phoenix Coyotes have had surprising seasons, but in opposite respects. The Blackhawks thought that Corey Crawford was finally becoming the goalie of the future for the team after last years’ performance, but was inconsistent for much of the year and saw a decrease in his numbers. To go along with Crawford’s poor play, the ‘Hawks lost captain Jonathan Toews for the last 23 games of the season due to a concussion, and he remains a question mark for the playoffs. Chicago has overcome a lot of adversity and secured the 6th spot in the Western Conference and enters the postseason as one of the hottest teams in the league earning a point in 9 of its last 10 games.

On the flip side, the Phoenix Coyotes went through an offseason where they watched Vezina-finalist and enigmatic goaltender Ilya Bryzgalov bolt for Philadelphia, and shipped disgruntled prospect Kyle Turris off to Ottawa. The biggest move of the offseason was signing underachieving backup goaltender Mike Smith from the Tampa Bay Lightning. Smith has been one of the biggest surprises in the league. Without the play of Smith, Phoenix may not be in this position. Ray Whitney has done his best Teemu Selanne impression and refuses to let old age hinder his production with 77 points to lead the ‘Yotes in scoring. Radim Vrbata had perhaps the quitest 35 goal season in the league, upping his goal production from 19 in 2010-2011. To finish off what was an overachieving and magical regular season, Phoenix won its first Pacific Division title in franchise history dating all the way back to the days as the Winnipeg Jets. The ‘Yotes have another first ahead of them now. For the first time in the history of the two franchises, the Blackhawks and Coyotes will play each other in the playoffs. This series features a veteran high-powered offense and a young but stingy defense that should make for one heck of a first round matchup.

Chicago is no strange 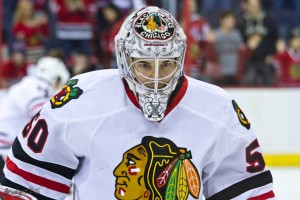 r to the playoffs making the postseason for the 4th season. The core players from the Blackhawk’s Stanley Cup run two springs ago are still around and will be depended upon to provide much needed veteran experience for the young players making their first appearance. Coach Joel Quenneville is going to need all 25 guys on the team to step up and play their role if the ‘Hawks want to make another run. The one guy that the Blackhawks are going to need in a big way is Jonathan Toews. His impact on all facets of the game is irreplaceable. Without Toews, the ‘Hawks are not very deep down the middle. Marcus Kruger and Andrew Shaw have been nice surprises for the ‘Hawks, but its hard to make up for the loss of  Toews. The ‘Hawks did averaged 3 goals per game in the regular season, good for 6th in the league which is a good thing considering they are playing the team with the 5th best Goals Against average in the league.

Corey Crawford needs to be what Antti Niemi was for the ‘Hawks in 2009-2010. The young goaltender has been pretty average this season and there is no better time for him to figure his game out and be a rock between the pipes. The advantage that Crawford has over counterpart Mike Smith is that he has a veteran defense playing in front of him. Duncan Keith, Brent Seabrook, and Niklas Hjalmarsson have all been here before with the ‘Hawks. The additions of Nick Leddy and Johnny Oduya round out what is one of the most solid defense corps in the entire league. Keith and Oduya are going to be counted on to produce some offense from the back end and to use their great skating ability to clear the puck themselves. If the defensemen can relieve Crawford of some pressure, and Crawford can play above average, than the ‘Hawks have a shot. This team reminds me of the 2010 Philadelphia Flyers that the ‘Hawks faced in the Stanley Cup: Good offensive firepower up front, solid back end, and average goaltending. Like Michael Leighton did for the Flyers, Crawford isn’t required to steal games for the ‘Hawks, but he must keep them in the game.

Now the offense. I already mentioned that the health of Toews makes a monumental difference for this team. Patrick Kane, Marian Hossa, and Patrick Sharp are the guys that everyone is going to look to for the offense. Kane is remembered for the Cup-clinching goal and his offensive talent must be on display during this series. Patrick Sharp is the ‘Hawks sniper and leading goal scorer and that must continue in this series. Marian Hossa had himself a great season leading Chicago in points. These three must carry the load on offense and find a way to solve a much-improved Mike Smith. What makes the playoffs so exciting is the role players that step up and make a major impact on the series (A la Max Talbot for the Penguins in the 2009 Finals). Kruger, Shaw, and Bryan Bickell are going to need to chip in with some offense and provide a spark for this team. Viktor Stalberg shaped up to be a pretty smart acquisition by Stan Bowman and his offense prowess is going to be crucial for Chicago. The Coyotes defense is good, but the more physical Chicago can be with them and wear them down, the better its chances of moving on.

On the injury front, Chicago is expected to get their 3 walking wounded back for the playoffs. Dave Bolland is an important cog in Chicago’s lineup in the faceoff circle and as the guy who is going to get under the skin of the Coyotes. He needs to throw guys like Radim Vrbata, Shane Doan, and Ray Whitney off their games. Bolland is Chicago’s pest, but he also kills penalties, scores some timely goals, and provides more veteran leadership for this team. Andrew Brunette suffered a foot injury and is probable to play in Game 1 for Chicago. He is another role player who, despite having a down year, is able to bring veteran leadership to the dressing room. And then theres Toews, but I won’t harp on his importance any more (But with him, Chicago is a MUCH better team).

Coach Joel Quenneville is one of the best coaches in the league and will have his troops ready to play for this series. Chicago comes into the series with a record of 6-1-3 in its last 10 games. The postseason is all about who is hot and Chicago appears to be hot at the right time. Coaching plays a major factor when it comes to matchups, which will be a game within the game in this series. Chicago also must improve in the special teams aspect. Phoenix has a very disciplined PK unit good for 8th in the league. If the Blackhawks can stay out of the box, and capitalize on the few powerplay opportunities it gets(Phoenix averages 9.30 PIM per game, 3rd least in the league), their is no reason they should not move on this round.

Phoenix Coyotes (3-1-0 vs. Chicago this season)

Phoenix is all around one of the better defensive teams in the Western Conference, and that may work in their favor against the Blackhawks. Mike Smith has been phenomenal for the Coyotes this season and is hot at the right time. His 38 wins are good for fourth in the league and he posted a 2.21 GAA and 8 shutouts. Smith is the staple for the Coyotes and he must play well for Phoenix to do damage in the playoffs. As odd as it seems, Phoenix is looked is regarded as the “underdogs” in this series despite winning the Pacific Division. Phoenix is going to count on its’ strong penalty killing to stop what can be an explosive Chicago offense.

One concern with Phoenix is the depth at forward. The team relies heavily on Whitney, Doan, and Vrbata to provide offense. Keith Yandle and Oliver Ekman-Larsson were two of the top scorers for Phoenix, but they play defense and must focus on being responsible in their own end. With the depth of Chicago’s defense, and the lack of depth at forward for Phoenix, the pressure will surely be on Mike Smith to steal some 1-0, 2-0, 2-1 hockey games for the Coyotes. Secondary scoring will be even more important for Phoenix than it will be for Chicago.

I think the Coyotes were a great story this season and gave Coyotes a reason to cheer for the team, but I don’t think they can match the skill and experience of Chicago. Coach of the Year candidate Dave Tibbett will have his guys out there battling, but Mike Smith can only do so much for this team. Chicago will pepper him with shots and eventually wear him down. I think Toews sits out Game 1 and comes back Game 2 giving Chicago the jump it needs to take the series. Although I heavily criticize him, Corey Crawford will finally show why the organization had enough faith with him to be its goaltender.

We’ll see how it all shapes out. Good Luck to your favorite team and until next time, Happy Hockey.