As playoff teams make adjustments for what they hope will be a successful two month journey and those already eliminated start to evaluate their seasons, coaches and management well delve through a large variety of player statistics. Some teams will look towards advanced statistics (Corsi, Fenwick, etc.) and everyone will look at the basics (points, plus/minus, etc.).

What about that plus/minus statistic though? How much value does it truly hold?

Earlier this season, Jesse Spector of the Sporting News noted how plus/minus still has its uses, but that it’s also misused on a frequent basis. He accurately pointed out that, “It’s just that plus-minus tracks the end result, rather than the process of possession leading toward the result — which is where the heart of analysis really lies.” Perhaps plus/minus does still have its place, like in evaluating full lines that are lagging in their defensive responsibility as Spector suggests with the Islanders, but it still fails to tell the whole story.

In evaluating Jordan Staal’s debut season with the Carolina Hurricanes, Andrew Hirsh of the Sunbelt Hockey Journal noted Staal’s “troublesome” -18 rating this season. He goes on to suggest, “The plus/minus rating may not properly illustrate his performance, but it does have some merit (albeit not as much as a lot of people care to believe).”

When it comes to the plus/minus statistic, I have to agree with Andrew. It rarely tells the full story. While Staal may have been “exposed” in some ways with his move to Carolina, I highly doubt he completely lost his ability to be a strong defensive forward as his -18 would suggest to many.

The plus/minus statistic was first popularized by the Montreal Canadiens in the 1950’s and was then slowly adopted by other teams around the league. The NHL finally introduced it as an official statistic in the 1967-68 season.

How often do all five skaters on the ice actually contribute to a goal for or a goal against though? As a lowly adult hockey league defenseman, I have always taken pride in trying to be a plus player. As I keep track of my plus/minus in my head, it can be incredibly frustrating to acknowledge yourself as a minus when someone else on the ice is completely at fault for a goal against.

Beginning with that annoyance, other questions began to pop up in my head. Why should players be denied credit for a powerplay goal under plus/minus if they are responsible for the goal? On the other hand, if one forward or one defenseman is solely responsible for a missed assignment on the penalty kill that leads to a goal, shouldn’t he take responsibility for it on the stat sheet? Also in regards to penalties, is it crazy to think that the player in the box for a goal deserves a minus for putting his team in a shorthanded situation to begin with?

With all of these thoughts in my head and many more, I decided that the 48-game shortened season would provide me with a terrific opportunity to keep track of plus/minus in a way that actually accounted for players’ individual responsibilities.

Just like how Mike Colligan broke down goals and situations in his recent article about the Penguins defensive system, I spent time after each Penguins game breaking down replays of every goal to determine who deserved part of the credit for a goal for or part of the blame for a goal against.

This system also has its flaws. It is based on personal judgment and can also be a time-consuming process depending on the game. Additionally, it skews for or against different types of players. Players who get powerplay time often get a nice boost from their advantage on the ice. Meanwhile, purely defensive defensemen look worse based on the raw stats due to their style of play. Inherently, the comparison within a team must be done by a player’s role. Offensive defensemen should be compared against offensive defensemen, defensive against defensive, top 6 forward against top 6 forwards, etc. Ideally, a comparison could be made across all of a certain player role or type in the NHL to figure out how a player actually sizes up in the league.

I did my best to take into account screens in front of the goalie, fake passes, fake shots, drawing a defender’s attention, and many other intangibles that are seen on the ice but not in raw numbers. Therefore, my plusses were not limited to players who touched the puck. As for the minuses, reasons included missed assignments, miscommunication, penalties, bad line changes, and anything else that led to a goal against in some way. 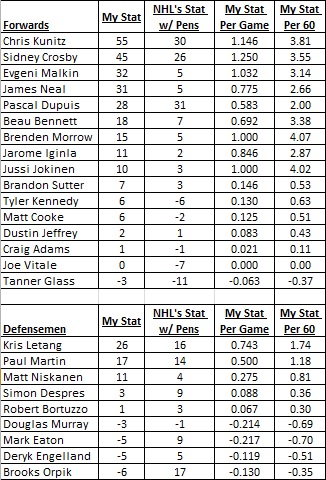 While some players (Pascal Dupuis, Paul Martin) finished with a very similar rating to their NHL statistic, many had a significant discrepancy for some reason or another. For the top scorers, the reasoning is likely due to powerplay numbers. The top 4 (Crosby, Kunitz, Neal, Malkin) all get significant powerplay time and the Penguins had the second best powerplay in the league.  That’s not covered in the NHL’s statistic.

For the 3rd and 4th liners, the difference likely comes from missed assignments by the defense or weak goals allowed by the goaltender. That is one of the problems with plus/minus; a winger can do his job covering the point perfectly and still end up with a minus when a defenseman makes a mistake.

For the defensemen, again the top scorers likely see a discrepancy since their powerplay stats are not considered for plus/minus. Meanwhile, a defensive defenseman like Brooks Orpik looks much better with the NHL’s statistic than my statistic. This is likely because he is on the ice with the top line frequently and receives plusses that he did not actually contribute to. By comparing him with the other defensive defensemen on the team though, the numbers demonstrate that Orpik is still the best defensive defenseman for the sizeable amount of minutes that he plays.

In the end, the big question is why does the hockey world still place any emphasis on plus/minus? For all of the advanced statistics that have been derived and with the ability to replay every goal from a variety of angles, there is no reason a general stat like plus/minus should receive much weight. It is, in fact, just a lazy statistic that does not properly represent the details. It’s time for plus/minus to evolve just like the rest of the sport has. Now who wants to help me calculate the other 29 teams next season?