[Last week, we discussed the reasons defenseman Zbynek Michalek didn’t work in Pittsburgh.  Today, we’ll look at how coach Dan Bylsma has accommodated Douglas Murray and shored up his team defense in the process.]

Throughout the spring, I was asked by many readers if there was a chance the Penguins could acquire Douglas Murray from San Jose:

I didn’t think so.  I saw Murray struggle with the Sharks this season and didn’t know how his slow skating could possibly fit in Bylsma’s system.  I’ll explain.

Early this season, the Penguins played a lot of man-to-man coverage in their own end of the ice.  [We broke this system down last year]

The system works…until it doesn’t work.

Once one player is out of position or loses a battle, the entire system crumbles, as it did in this February game against Carolina:

How did Jiri Tlusty get so open?

It can be tough to make sense of what happened when the puck is moving so quickly.  Let’s break down the play with the help of ROOT Sports’ camera above the ice: 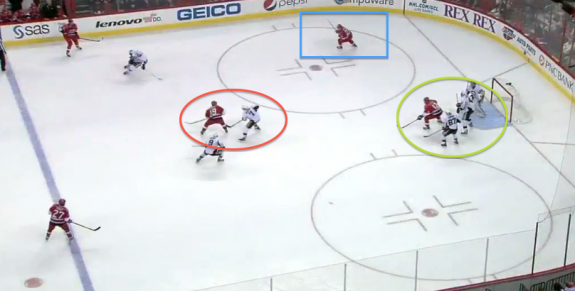 This isn’t good man-to-man coverage, but it’s sufficient.  While Crosby should be covering Semin, if you’re going to make a mistake, it’s better to be protecting the front of your net.

In the next scene, however, we see the system start to break down. 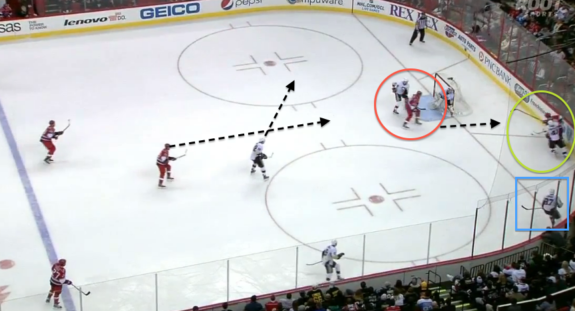 Things are breaking down, but the Penguins are still okay.  There is no one open in a prime scoring area.  The puck is behind the net and only players with the last name of Lemieux can score consistently from behind the net.

But then Semin moves in to pick up the puck from Staal.  He curls around the net.

Martin slides over to pick up Staal (who beat Bortuzzo), but then stops.  He realizes his guy was Semin, who is probably preparing to wrap around the net and score.  As Martin tries to cut back in front of the net, he trips and falls in the crease.  Disaster.

Meanwhile, Tlusty has floated into the slot…

The puck ends up on Tlusty’s stick and he blasts it past Marc-Andre Fleury.  Let’s watch it again:

A goal like this revealed many of the reasons the Penguins were letting up four, five, and six goals a night early in the season.  Players weren’t sticking to their responsibilities.

Even when they were, opponents realized that a few quick passes and criss-crosses were enough break down coverage and get someone open in front of the net.

How could the Penguins fix this?

Part of it required a change in mentality.  Forwards were more interested in getting up the ice for goals (remember this problem Evgeni Malkin had?) instead of taking care of their own end of the ice.  The defense wasn’t much different — always pushing to get out of their zone as quick as possible so they could join the rush.

Adding a bruising defender like Douglas Murray was an option.  Murray wouldn’t be interested in offense.  He’d stick to his defensive responsibilities and guard the front of the net like a troll at the bridge entrance.

But think about the man-to-man system the Penguins play.  How could the sluggish Murray keep up with a guy like Alex Semin for more than 20 seconds?  Or even 5 seconds?

This is why I thought Douglas Murray would struggle as a member of the Penguins.

Part of the reason is because Bylsma and the coaching staff have tweaked their system to fit his style of play.  Here’s a look at a more recent matchup against Carolina: 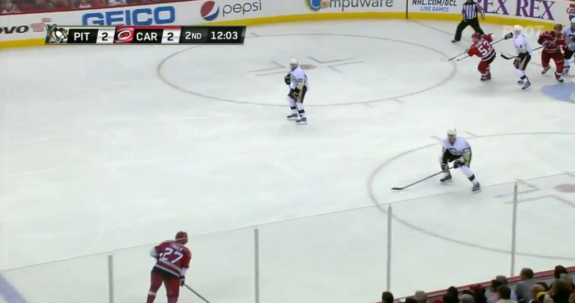 The puck is with Justin Faulk at the bottom of the screen.  Instead of the wingers running out to challenge shots from opposing defensemen, they now stay closer to their net.

They focus more on getting into the shooting lane and blocking shots (which Murray does well).  The Penguins coaches still don’t want their players dropping to the ice to block shots, but they want to force as many shots wide of the net as possible.

They’ve also relied less on the man-to-man system from earlier in the season.  Instead, they allow each defenseman to focus on what he does best.

Murray doesn’t have the speed to chase Semin around the ice; Brooks Orpik struggles with breakout passes under pressure; but both are physically dominant in front of their own net, so that’s where they tend to stay.

Simon Despres is the opposite.  He can’t quite handle the physicality of strong NHL forwards yet, but he’s excellent at breakout passes.  So he works the corners and kickstarts the breakouts.

The Penguins used to attack the puck all over the ice.  Now they’re more careful not to overpursue until they know it makes sense.

Unfortunately, no smooth defensive zone coverage will ever make it onto a highlight reel, so we only have videos of scoring chances against.  This flurry against Ottawa the other night is a good example though.

Robert Bortuzzo focuses on tying up forward in front of the net, while Simon Despres whizzes around the zone.

Here are screenshots from the sequence.  The bigger, slower Bortuzzo is the blue circle.  Despres is the yellow circle. 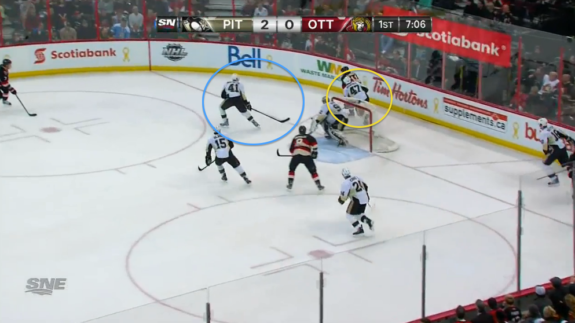 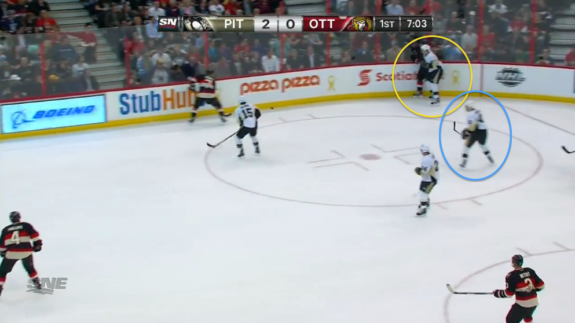 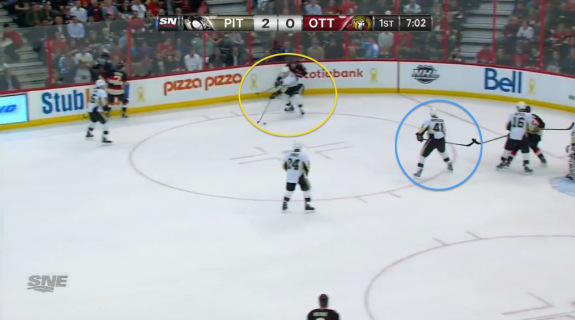 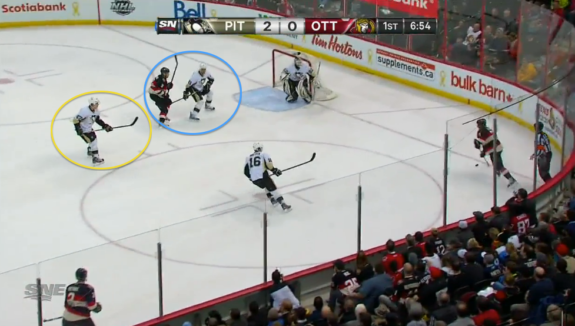 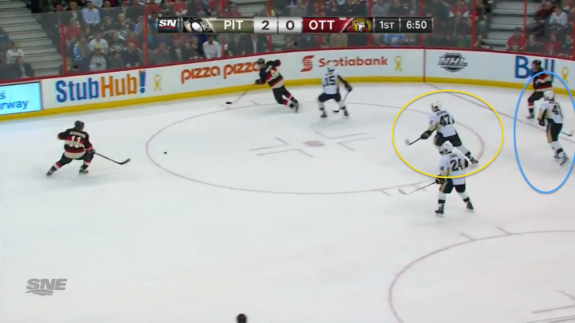 Of course, this system isn’t foolproof either.  It requires good decision-making and can force the ‘skating defenseman’ like Despres to cover a lot of ground.

The important takeaway is that it’s simply another option for the Penguins to use against certain opponents when the time is right.

If they want to dress a ‘heavy’ lineup that includes Murray, Orpik, Bortuzzo, and Deryk Engelland, they now have a defensive style that can protect the front of the net and limit opportunities.

If they want a faster lineup that includes Kris Letang, Paul Martin, Matt Niskanen, and Despres, they have options to allow them to excel as well.

The Penguins have the system to do it.  They have the players to do it.

But who knows what will happen over the next two months?