Friday night was no ordinary game for the Nashville Predators. News broke that Roman Josi, Craig Smith and others would sit the game out for unknown reasons while one very important player would make his season debut. Mike Fisher stepped onto the ice at Rogers Arena and all those in Nashville could hardly contain their excitement. Their former captain had come home.

Fisher sat comfortably between Austin Watson and Colton Sissons for the majority of the game and the fourth line role suited his return. His goal to put the Predators on the scoreboard made me sigh with relief as the first one can be the hardest to get. I know the sample size is tiny and his competition was the Vancouver Canucks, but let’s take a look at just how good Fisher was.

He Shoots, He Scores

Even the most cynical fans had to crack a smile as Fisher made that quick turn around shot that would beat Jacob Markstrom. Sure, Viktor Arvidsson and Filip Forsberg made that goal happen with some excellent puck work, but Fisher was in the right place at the right time and not by accident. This would be the only goal and point that Fisher would score, but what more could you really ask for?

Besides the goal, Fisher also recorded two hits, three shots on goal, and no giveaways. One of the more impressive stats was Fisher’s domination in the faceoff circles. Seriously, the Canucks had absolutely no answer for Fisher as he won 11 of 13 faceoffs.

Otherwise, he was fine in all three zones. He was outmuscled in the corners a few times but that’s the only real issue I had with him. The net front area in the defensive zone was locked down and Fisher did a better job of tieing up his man than I thought he would. Things might look a little worse once he goes up against a playoff team but that’s a bridge to cross later.

The goal aside, Fisher was never a liability and looked good alongside his linemates.

Fisher was a strong possession player in his final two years and he picked up right where he left off. For reference, here are his unblocked shot attempts (Fenwick), goals, high danger chances (HDC), and zone starts for (offensive) and against (defensive), all stats are at five on five. 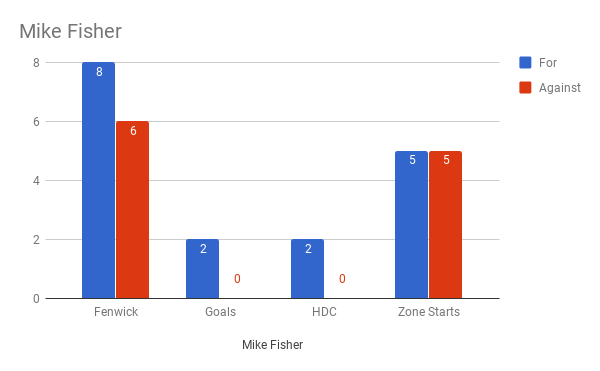 Peter Laviolette offered no zone sheltering on Friday as Fisher started in the offensive zone 50% of the time. The fourth line rarely receives favorable zone starts but it’s nice to know that Fisher wasn’t thrown to the wolves on game one. It also helps that he mainly faced Ben Hutton and Derrick Pouliot, who are not known as defensive stalwarts. One thing is for certain, the Predators were better for having Fisher on the ice.

While I don’t believe the goals will keep coming at this rate (33% shooting percentage), as long Fisher can keep stifling the opposition’s offense things will be fine. The same thing goes for high danger chances, as I don’t expect him to produce two each night but I do expect him to keep the percentage at 50% or over. But these are just the numbers that occurred with him on the ice, let’s see what Fisher was directly responsible for. 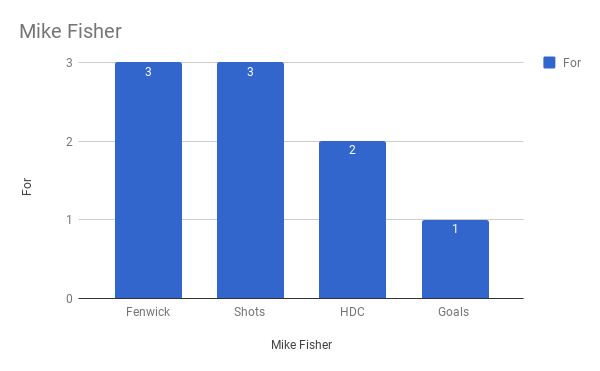 What should make every Predators fan happy are the high danger chances. Out of the two that occurred, Fisher was responsible for both including the goal that he scored. While the numbers may not be sustainable, it’s still nice to see. Otherwise, it’s reassuring to see him connecting on his shots. Out of the three unblocked attempts, all three were on net, meaning that he wasn’t missing.

Every once in a while, I try to ignore the numbers for a second and just enjoy the game. Tonight was one of those nights, and we should all be excited that Fisher is still a competent hockey player. I’ll be honest and say that I had serious doubts and while those doubts haven’t gone away, they’re not as bad as they were. The numbers aren’t sustainable, but that’s ok.

What the Predators have now is a veteran presence who is competent in all three zones. He may not be a difference-maker like he once was but he’s far from a liability. More games and a bigger sample size might reveal a chink in the armor but I think the defensive play on Friday was something we should expect to see for a while. The biggest question now is what will the lineup look like?