No one can deny how great the Nashville Predators have been over the past 15 games. They’ve won 12 games, lost two in regulation, and lost once in overtime to collect 25 points out of 30. No team has been as hot, although some teams are not far behind. The Tampa Bay Lightning, Boston Bruins, Florida Panthers, and Winnipeg Jets haven’t been as good but are certainly threats.

While some could make the case that the Predators have been the best team over 20 games, their last 15 games have been incredible. No team has been as good, so let’s see the embarrassment of riches that Nashville ices each night and how it compares.

For reference, all stats are accurate as of March 9, so they don’t include the shootout loss to New Jersey.

The Predators have pushed the pace over the past few weeks. The forwards have done a great job of forechecking and keeping the opposition hemmed in their own zone. This kind of pressure has resulted in turnovers which then lead to chances. Although this may be an oversimplification, when the other team can’t get out of their own zone, they can’t score. For reference, I’m using shot attempts (Corsi) and unblocked shot attempts (Fenwick) at five-on-five. 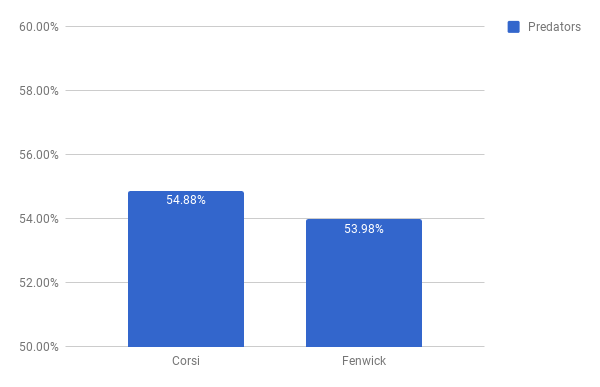 These are wonderful numbers for a team, as the averages are actually 49.31 percent and 49.71 percent, respectively. So to see the Predators pushing about 5 percent above the national average is truly a feat. Although they haven’t won the possession battle every night, the Predators have absolutely destroyed some teams.

Their Corsi over this stretch is actually good for fourth in the NHL, only behind Carolina, Calgary, and Boston. All three of those teams are noted possession giants, but the Predators are slowly gaining on them. At this pace, it wouldn’t be inconceivable for the Predators to end the season as the best possession team in the NHL.

While the Predators’ Corsi is incredible, their Fenwick is almost as great. They rank fifth in the NHL behind the three teams mentioned earlier as well as Columbus. What this means is that the Predators are elite at getting their shots past the opposition, as well as blocking any shots that come thru. The best players at this are P.K. Subban and Mattias Ekholm, who may not have great Corsis but excel in their Fenwicks.

Controlling the shot share helps the Predators control the pace of the game, even if they don’t always make it count. But over the last 15 games or so, the Predators have made sure to actually hit the net.

Outshooting teams doesn’t necessarily mean that you’ll win, but it’s a good sign for continued success. The Predators have done a great job of winning the shot share battle as well as the majority of scoring chances. Once again, all stats are at five-on-five. 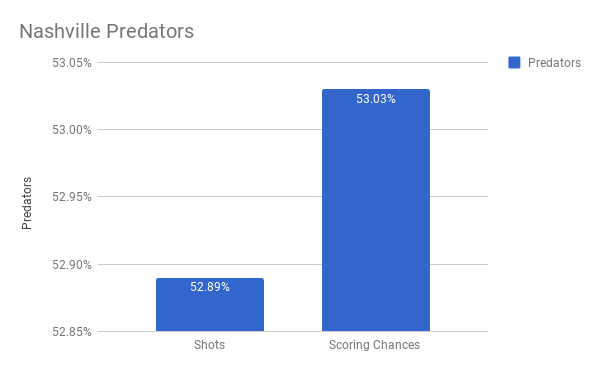 As stated earlier, shooting more than your opposition or producing more scoring chances doesn’t necessarily secure victory, but it’s a great place to start. The Predators have started shooting more, plain and simple. Forwards like Ryan Johansen have heard the pleas and moved beyond a pass-first, shoot-second mentality. This has resulted in the Predators being the fifth best team at shot percentage. In the past, a failure to seize the opportunities and shoot has sunk the Predators, but no more.

This willingness to shoot has led to more scoring chances, which the Predators have dominated as well. In the past 15 games, they rank seventh in the NHL behind some truly dominant teams. The Predators’ strength doesn’t come from their offensive ability though, as they rank 15th in scoring chances created, but their defense has been elite. Ryan Ellis has been especially good, as he’s been a nightmare in the corners.

As the Predators have shot and produced more scoring chances, other areas have improved as well. Most importantly, a certain high-danger zone.

The high-danger zone is the most important area in hockey, and the Predators have owned it over the past 15 games. While Pekka Rinne has been excellent in goal, his defense has tightened up exponentially. This had led to the Predators finally breaching the 50 percent mark. For reference, we’re using high-danger chances (HDC) and high-danger goals (HDG). 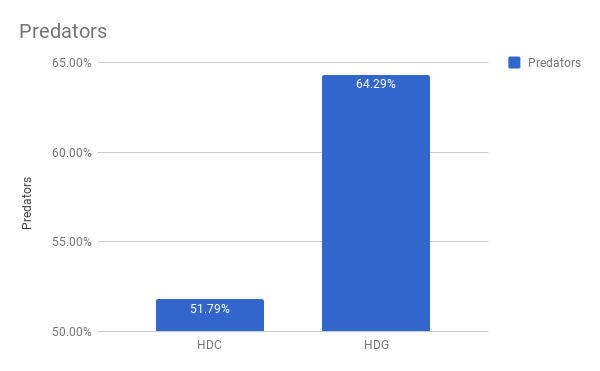 As mentioned, the high danger chances take a backseat to their goals. Whether it was Rinne or the offense finding their stride, the opposition couldn’t solve the Predators. Only two teams were better than the Predators as far as high-danger goals, as they scored the third most and gave up the eighth fewest. If this trend continues, the Predators will be even more terrifying to face in the playoffs.

You Gotta Score to Win

It may be an oversimplification, but you’ve got to score to win. No team has scored more than the Predators at five-on-five, as the chart below will show. For reference, we’re using goals and goals scored off of scoring chances (SCG). 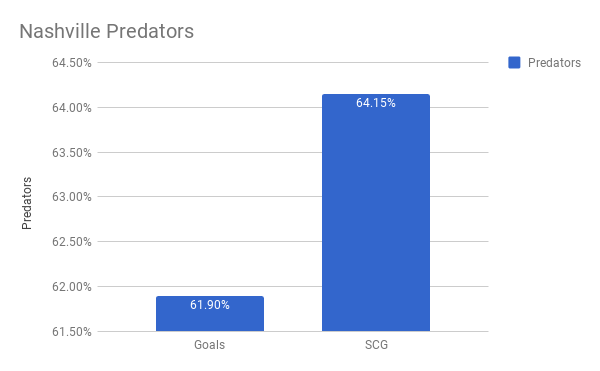 To make a simple matter simpler, the Predators dominated goals and goals off of scoring chances. They ranked first in both categories and the rest weren’t that close. Scoring over 60 percent of the goals is, quite honestly, one of the biggest achievements of the year. That shows a kind of control that most teams never achieve.

What the scoring chance goals tell us is that the Predators are scoring efficiently. They’re not wasting time or effort, but rather cutting through defenses and opposing goaltenders like a hot knife through butter. Obviously, Rinne and the defense has upheld their part of the proverbial bargain and played incredibly well, but the offense is reaching new heights.

The best part about this for Predators fans is that this reign is somewhat sustainable. While they may not be able to win 10 straight and get points in even more games, I’d expect this club to achieve Tampa Bay Lightning levels of success. Side note: I really hope Tampa and Nashville meet in the Stanley Cup Final. But until then, we’ll have to settle by watching the Predators destroy competition night in and night out, which is not a bad consolation prize.