Game 7 ended the way it began for the Nashville Predators and their fans, in heartbreak. Pekka Rinne had a rough first few minutes and spotted the Jets a two-goal lead. Predators head coach Peter Laviolette then made the call to pull the veteran and put in 23-year-old Juuse Saros. He kept his team in the game until about halfway through the third but it could’ve been over much sooner had Saros not been fantastic.

Visiting teams rarely control the pace of a game but the Jets did exactly that through the majority of the first two periods and Paul Stastny was one of the main catalysts. He drove possession and scoring all night while leaving Roman Josi and Ryan Ellis spinning like turnstiles in their defensive zone. The Predators had no answer for Stastny or his line, which proved to be a season sinker.

Stastny on the Board

Stastny made a big splash in Game 7 as he scored two goals and one assist. The Jets struck early against the Predators as Tyler Meyers scored off a weak goal from a sharp angle. Not wanting to miss out on the fun, Stastny made a good push to the net and caught the goaltender out of position. This would prove to be the game-winner and the end of Rinne’s night, and iced the game. Sure, the Predators came back and scored on the power play, but the Jets controlled the rest of the game with an ironclad grasp.

One thing was certain as the second period was dwindling down, the Predators needed to push. They continued to do so even after surrendering a goal to Mark Scheifele. Unfortunately, their desperate attempts at offense led to an unnecessary penalty and the Jets quickly capitalized as Stastny made his home in front of the net. Ellis was helpless as Stastny won the battle and gained the inside edge which led to a juicy rebound that found it’s way to the back of the net.

Scoring wasn’t the only way that Stastny showed up. The Jets never gave the Predators a chance to come back and Stastny was a big part of that. His line’s sustained zone time disrupted any offense the Preds could muster. It was a beautiful performance that left Nashville befuddled and exhausted.

The eye test and advanced stats finally agree on something, Stastny’s brilliance in Game 7. In fact, the heading is ironic since the Predators did very little to slow down Statsny. It’s not like Jets head coach Paul Maurice was sheltering him either, as he was exclusively played against the Predators’ first and second defensive pair as well as the second line. Despite the tough opposition, Statsny shined and the stats prove it. 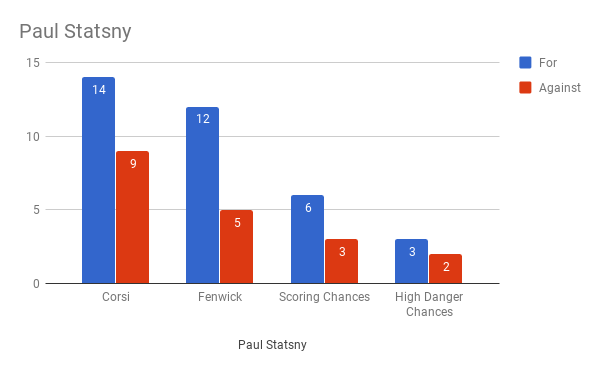 It doesn’t get much better than the graph above. This is exactly what you want from a second-line center in all three zones. The pace of play was pretty clearly in the Jets’ favor with Stastny on the ice, the Corsi and Fenwick stats prove as much. The best part of the night was his defensive work in front of the net. The Jets blocked almost half of the Predators’ shot attempts with Statsny on the ice, giving up five shots in total at even strength.

Stastny only surrendered two high-danger chances as well as three regular scoring chances. The Predators’ second line never really got going and were fairly inconsequential through the game, and the majority of the series. On the other side of the ice, he produced three of the scoring chances created by the Jets while he was on the ice. Things got better, as Statsny created all three of the high-danger chances that he was on the ice for.

The Predators threw everything they had at him but to little avail.

How Do the Predators Combat This?

The season is over but fans are still left with quite a few questions. One of which is how the Predators can stop the bleeding when P.K. Subban and Mattias Ekholm are not on the ice. Ellis and Josi proved during the second round that they can’t handle elite second-line talent and they’ll need help. Luckily, I have a few ideas on how to fix this.

The first is probably the easiest, which is to split Subban and Ekholm. A top line of Josi-Subban followed by Ekholm-Ellis would split the defensive acumen but might also dilute the offensive potency. The third line is also still a problem as Peter Laviolette doesn’t seem to trust them in any situation. The good news is that prospects Dante Fabbro and Alexander Carrier could be arriving soon. I wouldn’t count on that as Fabbro looks to spending his next year in college and Carrier took a step backwards in the AHL.

There is another option that is less reasonable. Trade Fabbro and Eeli Tolvanen for Erik Karlsson and go all in on next year, throwing caution, and the future, to the wind.

The real answer is probably somewhere in the middle as the Predators have all of their bottom pair defenders under contract for the next year. It’ll be hard to sign any free agents unless trades are made which begs the question, who would want to take a bottom pairing defenseman? I fear the only solution for the Predators’ defensive woes lies within the prospect pool which is still likely a year away.