The Ottawa Senators and the Calgary Flames will face off in a tale of two teams going opposite directions. The Senators are amidst their best stretch of the season while the Flames are going through their worst. The Flames can count on the fact that they beat the Senators earlier this season 5-2. However, things are different this time around.

For one, the Senators have fully emerged into their new identity and their new head coach’s system. Minor league goaltender Chris Driedger played in that last game but hasn’t seen NHL action since. Mike Condon has taken the reins on the starting goaltender job, and despite playing 23 straight games, does not seem to be stopping anytime soon.

1) The Flames are going through their toughest stretch of the season, as over the last 10 games, only one other team has fewer points than they do. They have a -10 goal differential during that span and are currently on a four-game losing streak. Head coach Glen Gulutzan called his players out after their last loss on Tuesday, saying that they “were pathetic. It was a pathetic display. No bite back, no kick back, accept it. Right down, our top guys didn’t do anything. We need somebody to step up.” We will see if the players respond in this game.

2) The Senators are feeling extra confident after shutting out the league’s hottest team on Tuesday. The challenge for them will be to keep up the intensity in this game, as they will expect their opponent to come out in full force. 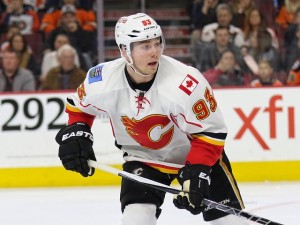 3) The Flames are hoping that young Sam Bennett will be able to step up in his role as a centre. He only recently ended his 12-game pointless drought with a last-second goal in a 5-1 loss on Tuesday. Nevertheless, he will need to turn that into positive momentum to not only help the Flames make the playoffs but for a better contract when his expires at the end of the season.

4) Bobby Ryan has been inconsistent with the Senators since his arrival, to say the least. Though right now, he is going through a good stretch for himself personally with four goals over his last seven games. He may never be able to match the expectations of his contract ever again, but the Senators are glad to see him contribute from time to time.

5) Tommy Wingels will be making his Senators debut after the team’s trade with the Sharks. He has five goals and eight points in 37 points on the season and will fit nicely on the Senators’ fourth line.

“Bring what I can. I like to play a physical, aggressive, speed game,” Wingels said of his style of play. “I like to forecheck hard, to chip in with some goals and that’s kind of the identity they have here. They like to play, play well defensively and don’t cheat for offence, but try to score goals.”