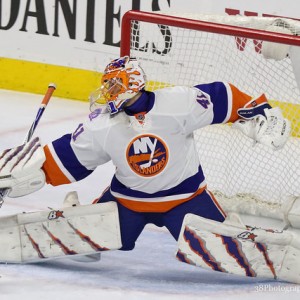 Jaroslav Halak will start in goal for the Isles. (Amy Irvin / The Hockey Writers)

The New York Islanders look to continue their recent strong play when they travel to Columbus to take on the red-hot Blue Jackets. The Islanders are 5-0-1 in their last six games while John Tortorella’s Blue Jackets have won five straight and are 7-1-2 in their last 10 contests. This is the first meeting of the season between these Metropolitan Division rivals. Jaroslav Halak will be in goal for the Islanders while Curtis McElhinney is expected to get the start for Columbus.

Halak has played well for the Islanders lately, going 2-0-1 in his last three starts including a 36-save performance in Tuesday’s win over the New York Rangers and a 38-save shutout December 1 in Washington.

McElhinney has been efficient in limited action with a 1-0-2 record and a 2.03 goals against average and a .930 save percentage. His last start came December 3 in a 3-2 shootout win over the Arizona Coyotes.

1)Part of the Islanders recent success has been due to secondary scoring. Anders Lee now has seven goals in his last eight games after scoring just one in his first 18. Jason Chimera, Casey Cizikas and Andrew Ladd are also starting to contribute more offensively as well. As a result, the Islanders are tougher to defend are scoring enough goals to win games.

2)The Blue Jackets have the league’s best power play so the Islanders will need their 13th ranked penalty kill to come through tonight. Thursday against St. Louis, the Islanders did not commit a penalty which prevented the Blues from getting any opportunities with the man advantage. Limiting the Blue Jackets chances with the extra attacker would be a big help.

3)This game will feature a pair of teams who like to block shots. Blue Jackets head coach John Tororella has always stressed getting in the way of opponent’s shot attempts and this team is no exception. Meanwhile, the Islanders have ranked at or near the top of that category all season led by Calvin de Haan with 73.

4)Columbus played Friday night, beating Detroit 4-1. the Blue Jackets are 2-1-3 in the second game of back-to-backs so far this season. The Islanders last played Thursday so they may try to take advantage of their extra rest coming into tonight’s game.

5)Sam Gagner has three goals and three assists in his last two games and has already exceeded last season’s point totals with 11 goals and 19 points in just 24 games. Anders Lee is the Islanders hot player with seven goals in his last eight games.

6)The Islanders are expecting Ryan Strome to be back in the lineup with Anthony Beauvillier expected to sit. Nick Foligno missed Friday’s game with the Red Wings and will be a game-time decision tonight for Columbus.

The Islanders are 5-0-1 in their last six games but they need to continue winning if they hope to get back into playoff contention. Tonight’s game against a strong division rival is the kind of game the Isles need to win move up in the standings. The confidence in the Islanders dressing room is growing and another strong performance will help even more. The Islanders have beaten some quality opponents during this six game point-streak and must take the surprising Blue Jackets seriously to continue the streak.