The entrainment value of an NHL hockey game is usually judged by how many goals are scored in the contest. However, in rare cases, a game that sees only one goal can pack a big punch, and this game was one of those rare occasions.

From the drop of the puck, the Bruins and Blackhawks put on a show for the fans as the two clubs went back and forth swapping scoring chances. The goaltenders dazzled the audience and kept everyone on the edge of their seat by making big saves. In the final minutes, Bruins fans ended up with flashbacks of the 2013 Stanley Cup Final as the Blackhawks came away victorious.

Although no goals were scored in the first period, it was an entertaining opening frame as both teams came ready to play. From the first faceoff the play was fast and as a result, both teams created scoring chances.

Through the first 10 minutes of play the Bruins were able to generate more offense and led the Blackhawks 9-2 on the shot chart. Many of the Bruins’ early chances came from the slot, forcing Scott Darling to make key saves. The best early opportunity came off the stick of Bruins forward Frank Vatrano, but Darling was able to make the blocker save.

In the second half of the period, the Blackhawks turned up their pressure and were able to get more shots on Bruins goaltender Tuukka Rask. Ryan Hartman got the best chance of the period for the Blackhawks when his shot from the top of the circles rang off the post but stayed out of the net.

Later in the frame, Bruins defenseman Joe Morrow got an uncharacteristic breakaway but was unable to cash in on the opportunity as Darling held his ground. At the end of the period, the Bruins led the visiting Blackhawks in shots, 17-6.

The second frame played out eerily similar to the first with the Bruins carrying the play, followed by a Blackhawks surge and then a strong ending for the home team. Once again, no goals were scored, but there were plenty of quality chances.

Duncan Keith and Patrick Kane were responsible for the best scoring chances for the Blackhawks. Keith found himself one on one with Rask early in the period, but Rask was able to make a big left-pad stop. Later on, Kane created space for himself by dangling past Riley Nash, but once again Rask made a big save.

For the Bruins, the best chance to break the tie came from David Pastrnak after he created a turnover on the Blackhawks’ blue line and fired a wrist-shot on Darling. The rebound was kicked out and found the stick of Bruins forward Tim Schaller, but Darling made a diving save to keep the puck out of the net.

Both clubs received power-play opportunities in the period and were unable to cash in. There was a 12-minute stretch of play where the Blackhawks did not register a shot on net, and the Bruins led 25-14 on the shot board at the end of the frame.

Forty minutes of thrills and chills. 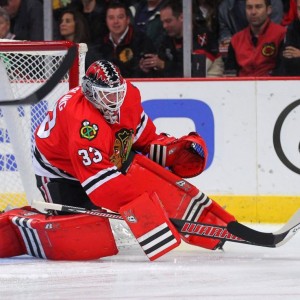 The Blackhawks came out of the locker room for the third period determined not to let the Bruins dominate the opening minutes, as they put a lot of pressure on the home team. Rask made some crucial stops to keep the game knotted at zero before the Bruins were able to respond with an attack of their own.

Darling was not going to let Rask take all the glory in the third frame and made save after save, including a big two-on-one stop on Brad Marchand. The save on Marchand ended up being the important stop of the night for Darling.

Heading into the final minutes of the period, it looked as though the game would need overtime before a winner would emerge, but Marian Hossa had no plans of going into an extra period. Keith stole a puck from Bruins forward Frank Vatrano and started a rush up the ice for the Blackhawks that resulted in Tanner Kero finding a wide open Hossa in front for the game-winning goal with 1:26 remaining in the period.

The Bruins pulled Rask for the final minute but were not able to get the game tied, and the Blackhawks took the 1-0 victory at TD Garden.