The Chicago Blackhawks and Nashville Predators faced off Sunday night for the fourth time this season. For the Blackhawks, this was their third game in four nights, but that didn’t slow them down or take a toll on them in the early goings of the game. With an early goal coming from Artemi Panarin, the Blackhawks showed they were ready to play. The Predators, however, made it known that they were very much alive after the first goal as well – scoring less than a minute after the Blackhawks first goal to tie the game. 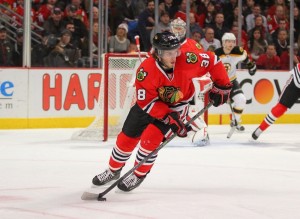 Duncan Keith had a milestone night, and all it took was one assist. Keith’s assist on Niklas Hjalmarsson’s goal gave him 487 points in his career. With that, he tied Chris Chelios for third most points in Blackhawks’ franchise history from a defenseman – good company to be in. For Keith, it’s just another day at the office. While he may be happy internally about hitting that milestone, there’s no doubt that the win means more to him than the individual accolade.

The Predators tried their best to fight back again in the third period, but the Blackhawks ultimately came out with the victory – their third in four nights, courtesy of a Ryan Hartman natural hat trick. The Predators now sit in 22nd in the NHL and will need to do a lot of work if they have any aspirations of saving their season and earning a playoff berth once again just one season after trading away captain Shea Weber and acquiring P.K. Subban.

Following a beautiful zone-entry by Patrick Kane that involved some fancy stickwork to create space, Artemi Panarin blasted a shot past Pekka Rinne to give the Blackhawks the 1-0 lead. The goal came at the 7:45 mark of the first period and was Panarin’s 17th goal of the year.

Less than one minute later, the Predators got a goal of their own courtesy of defenseman Mattias Ekholm. It was just Ekholm’s second goal of the season, but it was enough to tie the game for his team and flip the momentum immediately following Chicago’s first goal.

The Predators get on the board soon after Panarin's tally. 1-1. #CHIvsNSH

Following a successful penalty kill, Niklas Hjalmarsson found the back of the net for the fifth time this season. The assists were given to Duncan Keith and Kane, which gave Keith 28 on the season – just one shy of Victor Hedman for first in the league among defensemen, and 31 for Kane, just one short of Connor McDavid for the overall lead in the NHL. For Hjalmarsson, five goals is a new career-high.

Wait for it… #HammerTime pic.twitter.com/OsbAInCiuK

The second period didn’t have any scoring, though both teams did their best to help their respective causes. For Chicago, an opportunity to create more separation was presented but ultimately wasn’t capitalized upon. For the Predators, the middle 20-minute frame wasn’t enough for them to make up some ground and tie the game.

The Predators started the third period with a quick goal, just 2:01 in. Austin Watson found the back of the net with Mike Fisher recording his second assist of the game. Just like that, it was an entirely new game in Chicago with the score tied at two goals apiece.

Nashville scores early in Period 3 to tie things at 2. #CHIvsNSH

After blocking a shot and staying down on the ice, Ryan Hartman was able to skate to the bench under his own power. Just a few minutes later, he scored his eighth goal of the season from Richard Panik and Tanner Kero to give the Blackhawks the 3-2 lead. The goal was reviewed but was ultimately ruled a good goal.

Hartman sealed the game for the Blackhawks with an empty-net goal, giving the team the 4-2 lead.

.@RHartzy18 is credited for the empty-netter!

With just 32 seconds left on the clock, Hartman scored another goal to give the Blackhawks the 5-2 win and earn himself a hat trick with his 10th goal of the season. Kane recorded an assist on Hartman’s third goal, putting him into a tie with McDavid for first in the league with 32 assists.

First Matchup of the Season

First Matchup of the Season