It wasn’t just the perfect statement, bounceback and road game all rolled into one for the Montreal Canadiens against the Washington Capitals on Saturday. It was also a milestone for goalie Carey Price, who got win No. 250 as the Habs skated to a much-needed 2-1 victory.

Now we know why Price was so angry against the San Jose Sharks after being pulled for the first time in 97 starts the previous night. He had to wait another night to get the extra win. That and the stinkfest his team put on in front of him for the first half of the game. But mostly the win thing. Yeah. That’s it.

This is the stare everyone is asking for. Hard to tell who Price is looking at, but he's clearly not happy. pic.twitter.com/HegDzAgFKd

Washington carried much of the play for the first period, with Montreal getting the odd chance. In retrospect, considering the outcome of the contest, it was probably just a matter of the Habs having to weather the storm on the road before regaining the momentum from how well they finished the previous night’s loss against the Sharks.

Indeed, the Habs found their legs in the form of Artturi Lehkonen. On one play in the second half of the period, he beat both Matt Niskanen and Dmitry Orlov to a puck deep in the Washington zone and rang one off goalie Braden Holtby’s post. On the very next play, off the ensuing faceoff, he wrapped one around and in uncontested and unassisted to open the scoring. 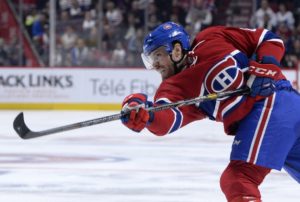 Again, Washington seemed to dictate the tempo of play early in the second, with several high-quality chances. For example, T.J. Oshie ripped one from the slot that Price took off his chest, with the Habs goalie making a sparkling save off Marcus Johansson soon thereafter.

There was little he could do on Washington’s first goal of the game, though. With Nathan Beaulieu and Alexei Emelin in the penalty box, the Caps took full advantage of their five-on-three power play as Nicklas Backstrom took a cross-crease pass from Justin Williams to pull his team even.

The anxious moments continued for Montreal as Shea Weber took an Orlov shot off his knee and was temporarily forced out of the game. Considering the amount of injuries the Habs are currently dealing with, the situation was less than optimal to say the least.

Thankfully, defenseman Jeff Petry helped to pick up the slack on the back end before Weber ended up returning in the third. Converting a beautiful Max Pacioretty pass, he put the Habs up once again with the eventual game-winning goal.

Petry sneaks in and converts a Pacioretty pass. 2-1 #Habs pic.twitter.com/JrsKXFEu3g 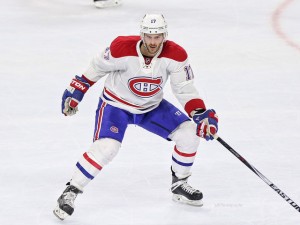 The Habs hung on in the third, albeit in atypical fashion, in the sense that they managed to hold the Capitals to just five shots on goal. Evgeny Kuznetsov only got their first 13 minutes into the final frame.

Habs forward Torrey Mitchell got perhaps the best chance of the period, picking off a Capitals breakout pass to get some one-on-one time with Holtby. He shot it wide, but it obviously didn’t matter, as by then Price had all he needed to help bring this one home playing behind a solid team effort from start to finish.

The Habs may have impressively snapped Washington’s six-game winning streak, but the news wasn’t all good, as Andrei Markov left the game in the third with a lower-body injury.

Considering Weber’s temporary absence, it may be worthwhile for the Habs to count their blessings and move on as best as possible, albeit without their defensive scoring leader. They now return home for two games before heading back on the road for seven straight.