The San Jose Sharks came off a long layoff to face an Ottawa Senators team that swept the season series against them last season. The result would be an unfortunate one for a rested Sharks roster that peppered Ottawa backup netminder Mike Condon with 37 shots and allowed only 16 on Martin Jones. The hockey gods can be fickle and certainly were not in teal on this night.

On the Sharks opening shift, a patient shot from the point from Dylan DeMelo led to a good look by Joonas Donskoi, setting the tone early as the first three minutes were spent in the Senators zone and included a Patrick Marleau slap shot that went off the post.

Tommy Wingels’ hook of Zack Smith sent the Senators to the power play, and Mark Stone quickly slammed home the rebound of All-Universe defender Erik Karlsson’s shot that bounced off the skates of Brent Burns for the power-play marker and early lead. The Sharks have now allowed a power-play goal in five of their last six games.

The Senators would get a 2-0 lead at 12:41 of the first period as Erik Karlsson would wire a wrist shot past Martin Jones with a stellar screen in front of Jones by Tom Pyatt. Brenden Dillon would swat at the puck but didn’t get good carbon fiber on it.

With less than five minutes to play in the opening frame, a penalty to Chris Kelly for holding Melker Karlsson lead to a frenzy in front of Condon, who kept the Sharks off the board after a Joe Pavelski chance bounced around the offensive zone. Both San Jose power plays in the first period only generated a single shot on goal.

The Sharks’ third power play at 6:54 of the second period finally got the Sharks on the board with Karlsson in the box for holding. Pavelski, who was one of the better skating San Jose forwards as the team started to wake up, dished to Logan Couture, who caught Condon leaning to his left before wristing the puck past the Ottawa netminder’s outstretched glove. It was Couture’s tenth goal of the season, and six have come on the man-advantage.

The Sharks would start to get their legs under them in the second period but then took a too-many-men-on-the-ice penalty with 8:09 left in the middle stanza. Pavelski, who deserved a far better fate as the best Sharks forward in the game, sent a shot off the post with about 5 minutes left in the second.

Chris Neil added to his career total of 2,490 penalty minutes with a two-handed whack on Mikkel Boedker to send the Sharks on their fourth power play. But the tenacious neutral zone play of the Senators would continue to disrupt the Sharks’ attack, as they killed off the penalty before Dion Phaneuf would continue the Senators’ march to the penalty box late in the period. The second period would end with a 2-1 Ottawa lead, but the Sharks were dominating in Corsi-for events, 59 to 21.

The third period would have the Sharks continue to dominate on the shot clock. Condon robbed Joe Pavelski, and then Chris Neil would add another two minutes to his stat line before Mikkel Boedker was called for a marginal goaltender interference penalty that Condon sold. The ensuing four-on-four action would see a massive shift by Brent Burns, his best in the game, as he would tie the score 2-2 at 6:30 of the third period, beating Condon for the second time to the short glove side. Paul Martin’s assist on the tying goal was the 300th of his NHL career.

With the assist on @Burnzie88 tying goal in the 3rd period, #SJSharks D Paul Martin has recorded his 300th @NHL point. Congratulations!

The tempo of the game picked up for the last ten minutes of regulation play. The Senators’ Kevin Labanc’s feed to Melker Karlsson and the Finn’s ensuing shovel shot was the Sharks’ best chance to take the lead, but Condon got across to make the excellent save and preserve the tie. Patrick Marleau would take a relatively soft interference call (the referees’ favorite call of the night) with under five minutes to go, but the Sharks’ penalty killers would again step up and deny the strong Ottawa side and even get a solid look for Melker Karlsson to try for the shorthanded goal.

The Senators would get every bounce imaginable with the game-winning goal by Chris Kelly at 18:54 of the third. Both Marc-Edouard Vlasic and Justin Braun missed the puck as it bounced behind Braun, and Kelly’s shot would deflect off Jones and then off the post and into the net. Jean-Gabriel Pageau added an empty-net goal on a clearing attempt, and the Sharks would lose despite outplaying the visiting Senators. 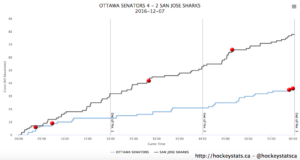