The adjustment from the NHL to the AHL is not an easy one.  Players have had to adjust to team bus rides instead of team charters.  Playing in Boston or Chicago is different from playing in Providence or Rockford.

Jordan Eberle, property of the Edmonton Oilers and a 34-goal scorer in the NHL last season, described dropping from the NHL to the AHL as “a little different,” with a sarcastic undertone.

Imagine if the shoe was on the opposite foot.

The AHL is dusted with talented 20-somethings that are looking to make the last leap of their careers and to the top league in the world; the NHL.  AHLers are used to playing top talent every game night, but the NHL lockout has thrown a wrench into the American Hockey League; young NHLers who have already seen a higher level of play .

“The league is extremely competitive,” said Peoria Rivermen defenseman Ian Cole last Saturday after a rousing victory over the Milwaukee Admirals.  “There’s always really good AHL teams, but I think that if you look at Charlotte or Oklahoma City, they don’t only have a good AHL team, they have really top-notch NHL players on their team.  It takes every good AHL team and makes them even better.”

“More guys came down from the NHL and are all over the AHL so that means [there are] less jobs,” said Cole’s teammate, Evgeny Grachev.  “More guys are fighting for a job, which is bringing the competitive level up.  Skill level went up a bit.  There are some big players [in the AHL]; look at Oklahoma City.  It’s different this year.”

Drop the telescope on Grachev and Cole’s team, the AHL affiliate of the St. Louis Blues.  The Rivermen have finished with a playoff berth or within four points of making the playoffs for the past four seasons.  But to start the 2012-13 campaign, the Rivermen posted a 2-7-2-1 record.  In the Rivermen’s first three games of the season, which all resulted in losses, they were outscored 12-4.

The Rivermen even faced a stretch when they were shut out three times in four games, being outscored 17-3 in that span.

“We just don’t finish games,” team leading-scorer T.J. Hensick said after the Rivermen suffered their heartbreaking seventh-straight loss at the hands of the Grand Rapids Griffins on November 11.

But it seems that the Rivermen have lifted their heads up and have found ways to win.

Since November 14, the mid-Illinois team has scraped together a 10-4-0-1 record and is currently on a five-game winning streak after a 4-3 overtime victory against the Hamilton Bulldogs Tuesday night.

“We’re realizing how tight the game actually is,” Cole said.  “It’s such a tight-checking game that needs to be mistake-free.  It needs to be played like an NHL game.  If you make a mistake in the NHL, there are four lines of guys who could hurt you.  Before if you made a mistake here, the top couple of lines could definitely hurt you but maybe the lower lines couldn’t.  Now, every guy on the ice can hurt you.  I think it took us a while to figure out that we needed to make stronger plays and get every puck out and make those for-sure plays.”

Arguably, the most exciting win came this past Saturday when the Rivermen were on the verge of being shutout for the fourth time of the season, until they scored three goals in a span of 3:26 late in the third period.  At 15:34, Russian left-wing Sergey Andronov deflected defenseman Mark Cundari’s shot from the point to put the Rivermen on the board.  That was followed up 2:31 later when fellow Russian Grachev, an NHL veteran of 34 games, took a wrist shot from the right-wing boards that eluded Admirals goaltender Magnus Hellberg low-blocker side.

“It’s funny how you get one good shot in and everyone thinks you had a good game,” Grachev said with a smile reaching from ear to ear.

Hensick added the final tally of a 3-1 win with an empty-net goal at 19:00 of the third period. 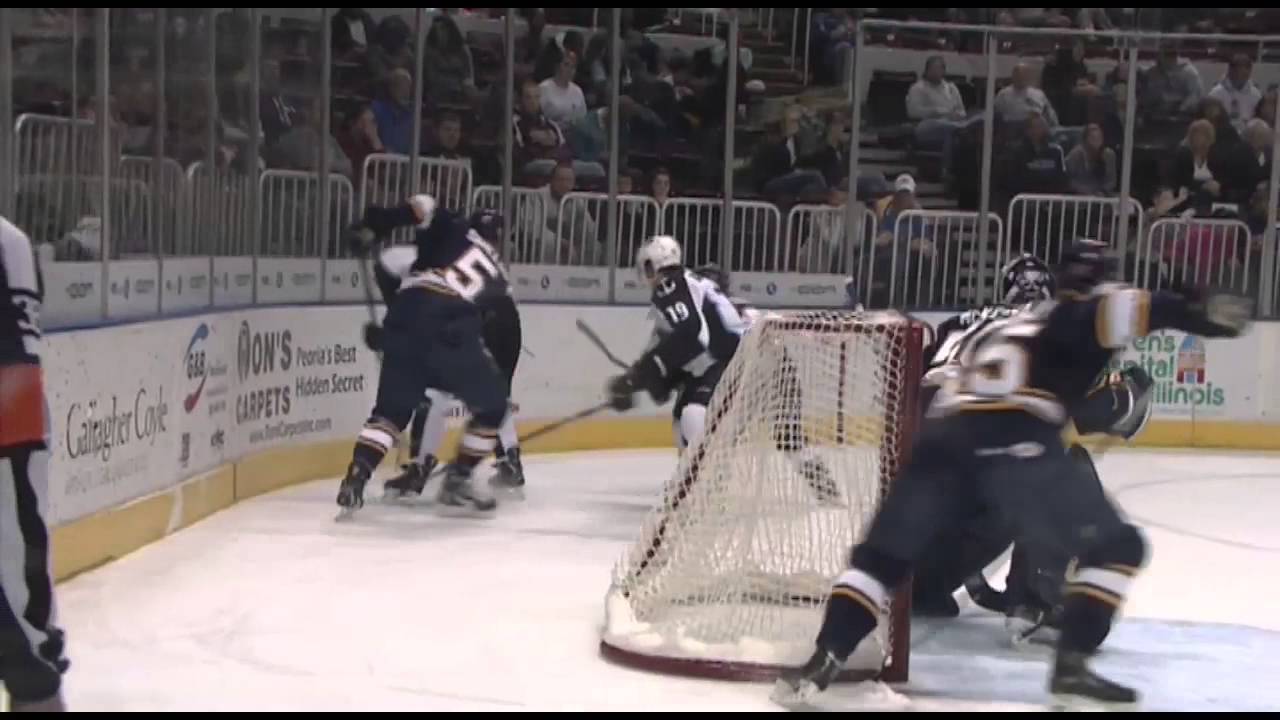 Rookie Jaden Schwartz, who described his time in the AHL as “a grind” in October, realizes that the guys who have played in the NHL, like Grachev, are the ones who will help him make the next step in his career.

“When you’re down in games late like we were,” he said after Saturday’s game, “it’s nice to have people who have been there, like Evgeny.”

The Rivermen may not be swimming with first-round draft picks like Oklahoma City, but they do have a core of players that could be skating in the NHL in the near future.

“Guys like Grachev, Schwartz, [Adam] Cracknell and [Taylor] Chorney can play in the NHL, hands down,” said Cole.  “They have all been great for us.”

After having to adapt to a more competitive level in their own league, there may be even more AHLers that can make it to the next stage of hockey.