The November struggles for the Buffalo Sabres continued through last week. They earned three of a possible six points, however, the scoring issues still haunted the club as they only combined for six goals in three games.

The week started out well with a second straight win against the Calgary Flames. This game was also the first time the Sabres scored more than two goals in a game in the month of November, en route to a 4-2 victory. The scoring frenzy was aided by a Calgary parade to the penalty box. They scored three power play goals in 1:46 to go up 3-1 and never looked back.

Unfortunately, it looked like the team used up all of its scoring on Monday night. Buffalo went on to lose to the struggling Detroit Red Wings 2-1 in a shootout on Wednesday night. Things didn’t improve on Friday night in DC against the Capitals. The Sabres would only score one goal in a 3-1 loss.

The Sabres were the worst shootout team in the league last season going 2-7. Scoring held them back, as they were only able to score four goals total in the shootout in nine games. In 15 total overtime or shootout games, last season Buffalo was only able to get the extra point in six. If they had picked up at least five of the nine points lost they would have been more of a threat in the playoff race.

The poor record in extra time has followed them into this season. They’re 1-3 in the shootout scoring only three goals in those four games. Combine that with a 0-2 record in overtime, the Sabres have already let four points escape them and it’s only November.

Now, to be fair, the team has improved their play and strategy in the three on three overtime. They’ve been snake-bitten, hitting posts and failing to finish their opportunities. The shootout, on the other hand, has not improved.

Kyle Okposo who was hyped as a strong player in the shootout has not scored in four attempts. Another concern is how much Robin Lehner struggles in these situations. Lehner has allowed four goals in four attempts against and has a save percentage under 60 percent on his career. Shootouts appear to be such a small part of the game, but when you’re in a playoff race at the end of the season those lost points will stick out like a sore thumb.

William Carrier has caught the attention of the coaching staff during the 11 games he’s played with the Sabres. The 21-year-old has only registered one goal but has been more effective than his statistics indicate. Carrier is creating chances for his teammates with his hard forecheck and speed. He’s the type of player the team needs in the bottom six if they want to be a Stanley Cup contender at some point.

In today’s NHL the successful teams are deep with four lines that can play with speed and can score. The Sabres are figuring that out with Carrier. They’ve put him in a role that allows him to be successful and he’s running with the opportunity. The former second-round pick has been rewarded with minutes on the top line to see if he can provide a spark for a team desperate for goals.

Bylsma on 48: he shows a huge energy level, high compete, and skates like the wind. He leads the team in hits in his short time here #Sabres

The Sabres have three tough matchups ahead of them this week. The big news is Jack Eichel’s return. The 2015 second-overall pick will return to the lineup against the Ottawa Senators on Tuesday night and should provide a huge boost. Ottawa comes into the game winners of four in a row and 7-2-1 in their last ten games. 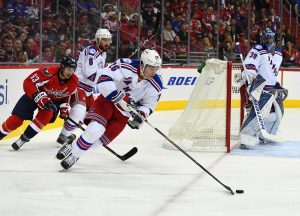 Buffalo will end the week with two home games. First, they’ll host the high-scoring New York Rangers. This will also be Jimmy Vesey’s first visit to Buffalo since deciding to sign with the Rangers in August. The final game of the week will be a Saturday matinee against the division-rival Boston Bruins. Like the Sabres, the Bruins have been up and down this year.

Taking two of three games this week would be a nice start to climbing the standings, now that the team is starting to get healthy. Injured defenders Dmitry Kulikov and Zach Bogosian are only a week or two away from returning. Kulikov appears to be the closest as he’s begun skating on his own. Believe it or not, we may see a fairly healthy Buffalo Sabres lineup for the first time all season very soon.