The Detroit Red Wings’ will have to play without the services of Brendan Smith for the next three to four weeks. It is yet another blow to an already depleted blue line. The team lost Alexey Marchenko (likely out of action for another week) to an upper-body injury on November 20th, and they are using Niklas Kronwall sparingly, due to his permanently damaged knee.

While it is not an ideal situation, there are a couple of unseen benefits to the injury bug biting the Wings.

Time to Re-Energize and Refocus 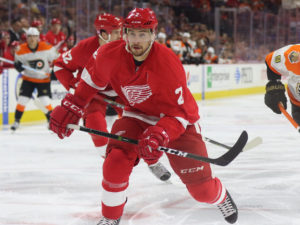 Marchenko and Smith have yet to find their feet during the 2016-17 season, so a break in action could benefit the duo.

In particular, Marchenko had a rough start to the year, committing untimely turnovers and making several mental errors through his first five games. The 24-year-old defender has improved steadily since then, even chipping in with five assists through 19 games.

While Smith did not struggle as badly early in the season, he displayed a bit of rust during his recent return to the lineup. Like Marchenko, he committed a couple of unnecessary giveaways and looked out of sorts at times.

Obviously, injuries are a negative aspect of the game, but perhaps both players can take their time out of the lineup and use it to re-energize and refocus. With Smith’s contract up at the end of the season, it is important for him to put together a solid campaign, even if it’s just to earn himself a contract elsewhere.

Young Blueliners Can Establish Themselves 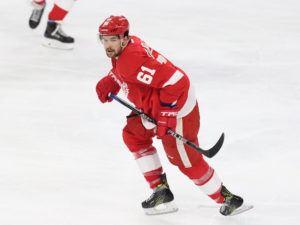 With Marchenko likely sidelined for another week, the duo of Ryan Sproul and Xavier Ouellet will get an opportunity to establish themselves as NHL defensemen.

Sproul has a head start, registering five points through 11 games. He has already placed himself above Ouellet on the depth chart, but perhaps he can convince the Red Wings’ brass that he is capable of playing in their top-four group.

For Xavier Ouellet, the window is probably a bit smaller, but it’s still an opportunity to get in a few games. At the very least, the 23-year-old rearguard should get the chance to string together a handful of games before Marchenko returns to the lineup.

Of course, Kronwall’s current condition is cause for concern. The Red Wings have already stated they will not recall a player from Grand Rapids heading into tonight’s contest against the Dallas Stars. Head coach Jeff Blashill insists he is comfortable carrying six defenders for now, but that they could recall someone for tomorrow’s practice.

Brendan Smith and Alexey Marchenko both injured but #RedWings not calling up defenseman because Niklas Kronwall to play Tuesday.

With Kronwall’s permanent knee damage, the club does not want him practicing the day after a game or playing in back-to-back games. It’s an uneasy situation, especially when you consider that the 35-year-old Swede is still receiving top-four minutes.

It also creates an interesting situation for this weekend, where the Wings take on the Pittsburgh Penguins and New York Islanders on Saturday and Sunday, respectively. If Marchenko remains sidelined through Monday, the team is likely to recall someone from Grand Rapids. While Brian Lashoff is probably the most likely candidate to join the Red Wings, Robbie Russo is putting together another solid campaign with the Griffins (12 points in 17 games), so there is an outside chance he will get to play in his first NHL game.