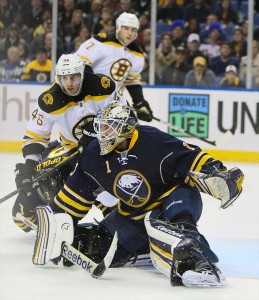 When Buffalo Sabres GM Tim Murray said that he wasn’t necessarily done for the day on Wednesday, he wasn’t kidding.

He didn’t have any specific plans, he said, but he noted that once he gets back to his office, if someone called in inquiry of a player or trade, he’d be all ears.

That team, the Dallas Stars, must’ve been calling, because at about 4:30 p.m., the Sabres had announced another trade: they would be sending goalie Jhonas Enroth to the Stars in exchange for goalie Anders Lindback and a 2016 conditional third-round pick. Bob McKenzie reports that the condition is that it can be upgraded to a second-round pick if Enroth wins four playoff games for the Stars before the 2016 NHL Draft.

Enroth, who has been playing in his fifth season in the NHL, will get another chance to battle for the number one job in Dallas, with Kari Lehtonen going through struggles this season. Enroth is set to be an unrestricted free agent at the end of the season.

Jhonas Enroth off the market, lands in Dallas for Anders Lindback and a pick. Great get for the Stars. He could be their No. 1 soon.

Enroth was one of the most constant players in the Sabres’ locker room since Ryan Miller left Buffalo. He has definitely shown his frustration of being the goalie on a 30th-placed team in the past two seasons, but he did love the city, the fans and the team. It’s someone that will be missed, but when it’s all said and done, it may be the right move for both teams.

Enroth, at 26-years-old, has a 13-21-2 record this season, with a 3.07 goals against average. He’s been the scapegoat of a bad team at some points, which will give him an opportunity to go to a team where he has the chance to improve and succeed.

The Stars, who sit just three points out of a playoff spot, are in the thick of a fight for the playoffs. They have the league’s top point-getter in Tyler Sequin (29-30–59), who has led the offense, but they’ve been hit by a defensive struggle throughout the past few months. That’s where Enroth will get his chance, which may ultimately help Buffalo out in the end with an upgraded pick.

He will get the opportunity to join back up with former Sabres coach Lindy Ruff, which should give him a leg-up in the process of attempting to be a full-time number one goalie.

For what it’s worth.. @JEnroth125 is the first @BuffaloSabres player to join Lindy Ruff in Dallas. Interesting

The Sabres got rid of a goalie who has only been criticized for being too small, just to get a 6-foot-6 Lindback. He was touted to be in the process of becoming the next Pekka Rine, after they both flourished under the coaching staff in Nashville together, but since leaving the music city, he has posted sub-.900 save percentages in the past two years and hasn’t given the same impact since.

With him and Michal Neuvirth at goalie in Buffalo now, it will be looking to be a battle for next year’s backup, unless one of the two separates themselves as a starter. The Sabres are struggling in all aspects of the game, so in the short-term, this deal doesn’t really matter. But in the long-term, if Neuvirth or Lindback aren’t the answers, Murray will find someone else in the offseason.

If the Sabres are looking to tank this season for a chance at the top pick in the draft, this is another perfect move.