For those who have visited southern Africa, you are likely to have heard and perhaps seen the ‘big five’. They are the large, powerful animals that inhabit the area. Elephants, rhinos, cape buffalo, lions and leopards. For the San Jose Sharks, they have a big five as well. The Sharks have five players who exceed a $5 million cap hit.

As we are now in the Christmas break, it is a good time to take a look at the Sharks and see how they compare to last season, especially these five top players.

At this point last season, 34 games into it, the Sharks record stood at 19-11-4, having just finished a five game win streak, the longest winning streak the team would enjoy all season. This season, the record is modestly worse at 17-15-2. Fortunately for the Sharks, their division is also worse. The Sharks remain in the thick of the playoff hunt in the Pacific, a division that has defined the word mediocrity this season.

As with any team, the Sharks need their best players to be their best players. Importantly, one of the big five, Logan Couture, has been injured and missed all but a handful of games. His productivity has been sorely missed and his absence could readily explain the drop-off in the team’s record. The other four members of the big five have played every game. They are defenseman Brent Burns, top line forwards Joe Thornton and Joe Pavelski, and second line forward Patrick Marleau.

The chart below provides the scoring and plus-minus numbers for each for the last two seasons through 34 games. 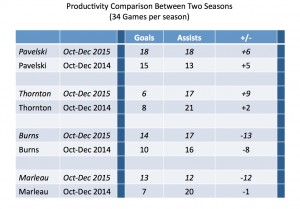 Burns, the lone defenseman in the highly paid group, has drawn plenty of attention. The league’s Most Interesting Player has been a shot-creation beast and leads the league in goals scored by defensemen. His offensive numbers, already elite last year, are up a notch up from last season. Most troubling, though, is that Burns has struggled mightily in the plus-minus area, even with better and more stability in his partner. My eyeball test tells me he deserves better than the stat shows; he is better this season than last. He creates a lot of offensive chances, but the team has shown an inability to capitalize on these. On the defensive side, he continues to make mistakes, leading to numerous goals against the Sharks with him on the ice. I’ve been among the crowd that believes he would be best served as forward. My colleague Andrew Bensch recently wrote about many of the reasons for a change and I agree. That said, it is not changing and mitigating Burns’ defensive liability is critical to the Sharks this season. Also critical if less noticed, doing a better job of scoring off the chances which Burns creates.

People have taken note of Joe Thornton’s declining numbers, on track for some of the lowest numbers of his career. In practice, Thornton’s only major fall off has been in even strength goal scoring, something that has been only a modest part of his game. Thornton’s plus-minus is solid and deserved, the team has controlled play with him on the ice, leaving few opportunities for the opponents to score against the Sharks. The assist numbers are down a bit, but I’m not overly concerned. While Pavelski has manned one wing, the other wing has been in flux for much of the year. Some added consistency in that spot will help Thornton’s assist numbers head north in a hurry. My bigger concern is the dip in his play which came at about this point last year. That dip coincided with an injury that caused him to miss 4 games, but likely had a longer lasting effect. The skill and talent remain, whether the body holds up is the question.

New captain Joe Pavelski continues to be among the best players in the league. If he continues his point per game pace (and he’s ahead of that now), Pavelski would easily surpass his career best totals from the 2013-14 season. Different from last season, Pavelski is getting a larger portion of his goal totals at even strength. He sits tied for third in even strength goal scoring. He’s taken the hard road to improving his goal numbers — and succeeded. If the Sharks power play hits its stride (which finally seems to be happening), Pavelski could approach 50 goals this year. He had 19 power play goals last season. His two goals in the final game before the break were only his fourth and fifth power play goals of this season. In typical Pavelski fashion, his first goal tied the game, his second was the game winner. Pavelski is the heart and soul of the team.

Patrick Marleau is, once again, among the more controversial Sharks players this season. Trade rumors flew early on. Marleau’s scoring took a big hit last season, especially his goal totals. This is very problematic for a player who is paid to be a finisher. This year, his goal totals are up where one would expect, but his plus-minus is a disaster. Over the past 82 games, beginning with game 35 of last season, Marleau is a gut wrenching minus-28. Marleau has been moved from wing to center in Couture’s absence and the jury is mixed on that move. I like the move, Marleau appears more engaged and effective. Still, the goals against numbers are a huge issue. Former head coach Todd McLellan failed to fix it last season and current head coach Peter DeBoer is not succeeding this year. To add to the concern, Marleau had a miserable second half last season. The concern is similar to the one with Thornton, he has the skill and talent, but will he be able to summon it consistently as the season gets tougher.

What Needs to Change

In several respects, this season is similar to last season for the Sharks five highest paid players. Among this group, Couture’s absence has been easily the major story. So far, the four healthy players are carrying the scoring load, their 51 goals scored represent 55% of the team’s total. At the same point last year, the top five had 53 of the 95 team goals, a nearly identical percentage with one additional contributor.

The second story seems to be the ongoing issues with Burns and Marleau in the plus-minus area. Marleau is second among Sharks forwards in ice time while Burns leads the team among all skaters by a large margin. Having two players that play huge minutes while heavily negative players is a drain on the team. It is a drain that the team can not afford to let continue. DeBoer needs to find ways to get both players to continue to capture their offensive upside while limiting their defensive downside. Otherwise, even with the mediocrity in the division, the Sharks may struggle for a playoff berth.