For the San Jose Sharks, misery seems to find more misery these days. In a time that should be celebratory, the Sharks have managed to muck things up. Patrick Marleau is sitting on 997 career points, all as a member of the Sharks. 1,000 NHL points is a big deal. Marleau is poised to become the 83rd member of that illustrious group. And while he is unlikely to make the Hall of Fame, he’ll deservedly get consideration. This should be a time that Sharks fans can enjoy and appreciate with a wonderful player.

Alas, that is not what is happening. The Sharks have gone into a free-fall, losing eight of 11 games. Not only have the Sharks sunk back in the standings, they have wiped out the much-needed goodwill that came with a fast start to the year. Instead, there is a palpable fear among Sharks fans that this season will look a lot like the abyss of last season. For some, the emotion is not fear, but apathy. Thus far this season, the fans have managed to stay away in numbers not seen in a decade.

Marleau is the Sharks’ all-time leader in games played, goals and points. He also leads in power-play goals, even-strength goals, short-handed goals and game-winning goals. He should be getting long and loud ovations as he approaches this mark. If losing games and flagging fan support were not enough to sully the sweetness of a major NHL milestone, there are Marleau trade rumors and opinions aplenty (here and here and here and here and here, just for starters). If Marleau is on the trade block, it makes sense to ask why. Players are not traded unless a trade solves a problem. So what is the problem?

The first problem with Marleau is not his play, but his contract. He makes about $2 million too much for his current level of play. Marleau is the 39th highest salary cap hit in the league. His cap hit is 27th among forwards and 10th among wingers. To some extent, Marleau’s offensive decline has been masked by his participation on an elite power play. Separate that out and you quickly find a much more modest contributor.

A quick glance at last season’s results show that Marleau is putting up numbers that are similar to Michael Frolik. This season, it is more of the same. Frolik has nine even-strength points and is minus-1; Marleau has seven even-strength points and is minus-3. Frolik is 178th in cap hit among all players, 98th among NHL forwards. His cap hit is over $2.3 million less than Marleau’s. While I choose Frolik for this comparison, there were many player comparisons that I could have selected to tell the same story.

Contracts are what they are. All teams have better ones and worse ones. Marleau happens to be overpaid by a sizable amount. Realistically, Marleau’s current peer group is somewhere around the 100th best forward in the NHL. NHL teams roster about 400 forwards. Marleau remains a good and useful NHL player.

In some cases, one problem begets another problem, and that is the case with Marleau. With his large salary, management expects him to deliver at a level that matches his paycheck. Unfortunately, his paycheck exceeds his ability.

Marleau is no longer best suited for nearly 20 minutes of ice time per night. Nor is he best suited to play consistently against other teams’ top players. Giving Marleau fewer minutes against lesser competition would be a major boost to his game and helpful to the Sharks overall. Put a fresher Marleau in against lesser talents and his productivity would go up substantially. In the goal below, Marleau simply owns Panthers’ third-pair defenseman Alex Petrovic. It is a complete mismatch. This goal wouldn’t happen against any of the Panthers top defenders like Brian Campbell. 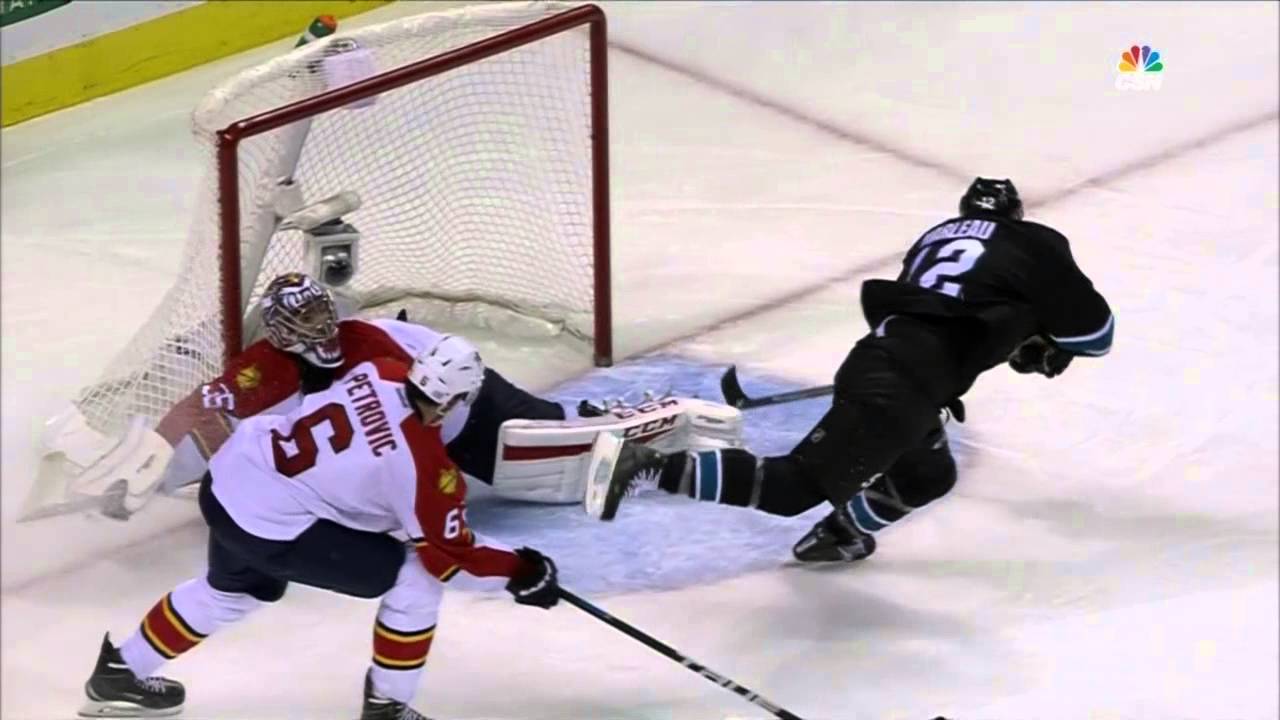 Among forwards, Marleau has the 27th highest cap hit and has the 24th most ice time. The Sharks are playing Marleau in a role commensurate with his salary cap number, not his current ability. It was a fool’s errand last season under Todd McLellan, when Marleau finished ninth in total ice time among forwards. Under new coach Peter DeBoer, it is a fool’s errand again this season. Marleau’s ice time is actually up eight seconds per game so far this year. No one else Marleau’s age or older was even close to him in ice time last year, the same is true so far this year.

At one time in his career, Marleau could be considered among the best players in hockey. The 39th best player, the 27th best forward and a top-10 winger. He was at least that good. Those days are gone, but Marleau is not a relic and he certainly is not ready to be put out to pasture. What matters now? Marleau’s talents must be used wisely.

The Sharks have fallen into a trap of their own making. They signed a contract with a player for too much money. That happens. Yes, it is a problem, but not a huge one unless it gets compounded by other poor choices. That is the real issue here. The Sharks have attempted to use Marleau in a role that fits the contract, not the player. The team has compounded the basic problem, much as they did last season. Lessons have not been learned. In short, the Patrick Marleau problem is less Patrick Marleau and more the coaches and management.