The San Jose Sharks began this week on Sunday evening with a 3-1 victory over their Pacific Division rival Calgary Flames. Being a divisional game, it might have been the most important game of the week, but it will not be the most discussed. The Tuesday night tilt against the Nashville Predators was one for the ages. And for the ageless.

Versus the Predators, the Sharks built a 3-0 first period lead behind dominant play. One noteworthy milestone was reached – Erik Karlsson notched his 400th career assist on a power play goal by Joe Pavelski. Karlsson is 61st all-time in assists by a defenseman. It wasn’t the last milestone of the evening, not even the last use of the number 400.

One of the Sharks’ worst periods of the season followed one of their best. They were badly outplayed in the middle frame and coughed up the lead. The teams went to the locker room tied a 3-3.

The third period was as a burner. The Predators took the lead with a goal from an unexpected source, Rocco Grimaldi. His was the fourth consecutive goal from Nashville. It was almost a fifth, when the Predators executed a perfect 2-on-1 rush with just over eight minutes remaining. Instead, Sharks goalie Martin Jones made perhaps his best save of the season, with a powerful push and a diving stretch to get a glove on Craig Smith’s point-blank shot to keep it a one-goal game.

Within the next two minutes, the Sharks would retake the lead. A goal from Joe Pavelski tied it, coming off a great left to right cross-ice feed from Marcus Sorensen. On the ensuing possession, Justin Braun (who’d had a miserable game) sent a brilliant stretch pass up ice to spur a 2-on-1 rush for the Sharks. Again it was Sorensen, with a cross-ice pass (right to left this time) to Joe Thornton, who went short-side on Juuse Saros for the go-ahead goal, and his 400th career tally. The Shark Tank exploded, well aware of both the game and the milestone for the Sharks’ most beloved player. The goal held up as the game-winner. 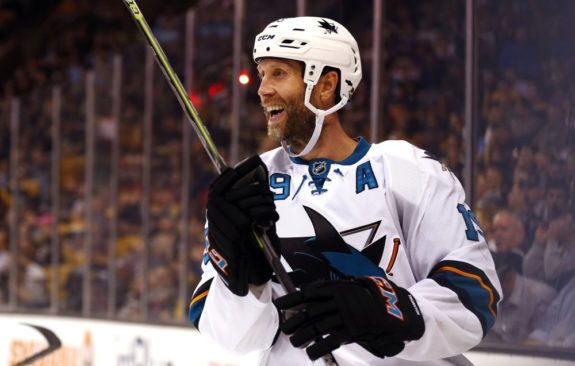 For the second time in just a few weeks, the Sharks pulled off a dramatic comeback win over the team with the best record in the league. The Predators have lost just four times in regulation this season. Two of the four losses came against San Jose, both by the score of 5-4. Both times, Nashville led with under ten minutes to go.

The Sharks Busy Day Off

Also on Wednesday, former Sharks defenseman Paul Martin decided to call it a career. Martin was sometimes known as the ‘Burns whisperer’ for his complementary play alongside the uber-talented but unpredictable Brent Burns.

His deal proved expensive to the Sharks. He signed a four-year, $19.4 million contract as a free agent in 2015. In the first two years, he lived up to the deal, playing a key role in Burns’ Norris Trophy win as the league’s premier defenseman. Martin also had a key role in helping the Sharks to reach their first ever Stanley Cup Final. Alas, the last two seasons of Martin’s deal proved problematic. He was limited to just 14 games in the 2017-18 regular season, the third season under contract. Martin was bought out of the fourth year of his contract over the summer.

His last NHL shift is exactly the sort of ‘low note’ no player wants to leave on. He and Burns botched a break by Vegas in overtime of Game 3 of the 2018 Western Conference Semifinals, resulting in a Vegas win and Martin’s benching for the rest of the series, which became the rest of the season, which eventually became the rest of his career. The buyout means the Sharks did save a bit on the total contract. Ultimately, Martin earned about $18 million for what amounted to two full seasons and a very limited third season.

Thursday was the story of the one that got away. And the other one that got away. Patrick Marleau left the Sharks, where’ he’d been for 20 years, for the Toronto Maple Leafs in 2017. He returned to San Jose and received a huge ovation last season. But Marleau wasn’t the only one who got away. The Sharks pursued John Tavares intently over an extended period. They reserved cap space for him a year in advance and had a built-in role for the elite centerman. Alas, Tavares entered free agency and chose Toronto as his destination, with the Sharks apparently finishing third, which is to say they got nothing. Well, except the cap space remaining was sufficient to land Erik Karlsson, so there is that. 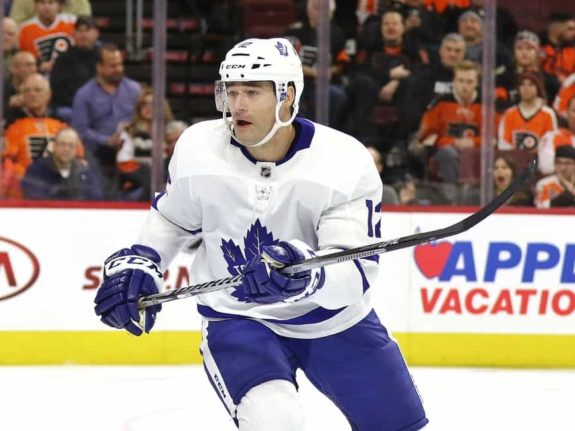 Last season’s game at the Shark Tank was dominated by the Sharks, especially on defense, though Toronto’s Auston Matthews was the best player on the ice. An injured Matthews didn’t make the game this season. This season’s game was an entertaining affair, but the Sharks defense from last season was nowhere in sight. The opening period was fun in a number of ways, and ended with a 3-2 Sharks lead. But over the next two periods, the Maple Leafs got a number of odd-man rushes and cashed in on three of them. It’s been a theme all season, giving up quick strike scores remains a major problem for the Sharks. So while the Sharks were able to put up a good shot volume, they got nothing more by Frederik Andersen and the result was a 5-3 Sharks loss.

There’s been a lot of excitement in Sharks Territory this week. Halfway through their six-game homestand and through some eventful moments this week, the Sharks sit atop their division, albeit not by much. Meanwhile, the other three Pacific Division playoff teams from last season hold the three spots at the bottom of the division. This season’s Sharks are a very much a work in progress. But at least they are a work in progress that doesn’t have to overcome a poor record and a slew of injuries.