WINNIPEG — Joe Pavelski’s put away the winner with 3.6 seconds remaining in regulation as the San Jose Sharks edged the Winnipeg Jets 5-4 in a tight matchup of the Western Conference’s division leaders.

Gustav Nyquist scored twice, giving him 19 goals on the season and three in his six games since being traded to the Sharks (43-19-8) in late February. Marc-Edouard Vlasic and Marcus Sorensen also scored for San Jose.

Aaron Dell made 21 saves as the Sharks remained undefeated in March with their sixth-straight win.

The Jets fell to 12-5-2 against Pacific Division opponents this season. 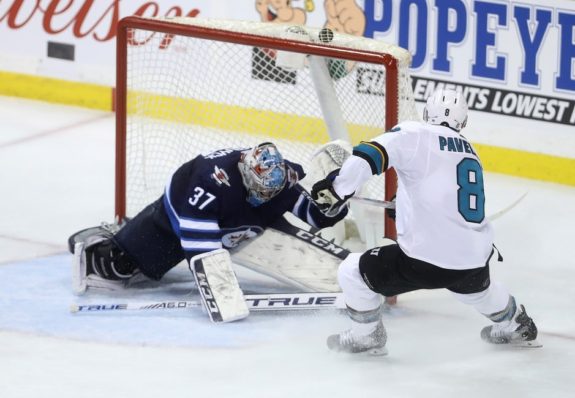 Connor Hellebuyck stopped 31 shots as his season record dropped to 28-20-2.

Vlasic opened the scoring by burying his own rebound 8:05 into the game, his second goal of the season and first since Nov. 15.

Winnipeg responded 32 seconds later as Copp scored 10th of the season with a redirect of Ben Chiarot’s point shot.

Winnipeg went 1-for-2 on the power play as Connor scored his 27th of the season 45 seconds into the second period.

Nyquist’s second of the game was another equalizer, making it 3-3 midway through the second. Sorenson’s go-ahead goal came two minutes into the third.

Perreault tied the game up yet again with less than four minutes remaining, with the game seemingly destined for overtime before Pavelski put the game away.

The Jets continue their three-game home stand when the Boston Bruins visit Bell MTS Place on Thursday and the Calgary Flames are in town on Saturday.