It’s a quick turnaround and a 462-mile trek for tonight’s officials. The crew from the opening game between the Blackhawks and Kings will take to the ice for Game 2 between the Penguins and Bruins.

Wes McCauley and Dan O’Halloran will be tonight’s referees, with Jonny Murray and Jean Morin manning the bluelines. This is the second game this postseason officiated by this quartet and the second time all season that McCauley and O’Halloran have worked a game together.

Their opening game of the Conference Finals between the Hawks and Kings was a close-called affair by McCauley and O’Halloran, with only six penalties. The only officiating controversy of the game was a non-call on a hard hit by the Blackhawks’ Dave Bolland on Mike Richards of the Kings.  The call on the ice was somewhat validated by the fact that Bolland did not receive any supplemental discipline after the play was reviewed by the league.  Richards did not play in Game 2. 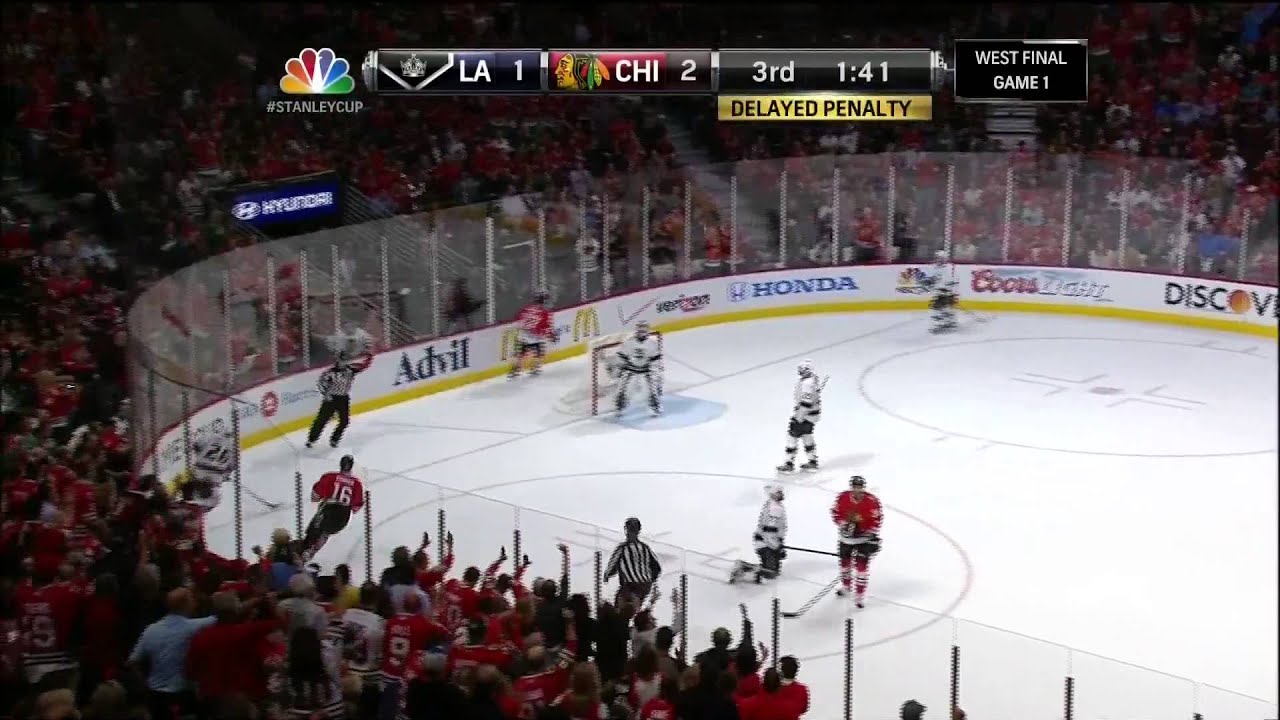 McCauley is a rising star among the NHL officiating crew. A six-year veteran, he has 587 regular season games and 52 playoff games under his belt. He started his hockey career as a player – suiting up on defense at Michigan State and later with the ECHL’s Knoxville Cherokees and Las Vegas and Fort Wayne of the IHL. When his playing career ended due to a knee injury, McCauley opted to follow in his father’s footsteps and join the striped side.  John McCauley was an official from 1970-81 and served as the NHL’s Director of Officiating for three seasons.

McCauley averaged 7.2 penalties called per game in the regular season, rising to 8.5 in nine postseason appearances this year.

The Penguins are a flawless 4-0 when McCauley is one of the officials. They picked up a regular season win over the Leafs and three postseason victories – two over the Isles and their Game 1 victory over the Ottawa Senators.

McCauley hasn’t seen the Bruins up close in nearly four months. He last refereed their game against the Winnipeg Jets back on February 17. In the two regular season games McCauley worked, Boston has posted a 2-0 record.

The second-longest tenured official remaining, O’Halloran also has the most playoff experience. He’s refereed 131 postseason matches, including the Stanley Cup Finals in 2007, 2008, 2010, 2011, and 2012. O’Halloran also suited up alongside Bill McCreary for the 2010 Olympic gold medal game in Vancouver.

O’Halloran’s first NHL game took place in Pittsburgh, with the Pens facing off against the Mighty Ducks of Anaheim way back in October 14, 1995. Jagr had two goals, Lemieux had three assists, and Bryan Smolinski – a close friend and former teammate of tonight’s other official, Wes McCauley – was in the Pens’ lineup.

This season, the Penguins are 1-3 when O’Halloran takes to the ice. They went 0-2 in the regular season before splitting their two postseason matches officiated by the Ontario native. The Bruins have fared better, posting a 4-2 record with O’Halloran officiating, including three postseason games in which Boston went 2-1.

The Penguins were off their game for the opening match of this series, thanks in part to some rough play by the Bruins and a lack of control by officials Chris Rooney and Brad Watson. They lost their focus, opting to play a physical game instead of leveraging their potent offense to take advantage of opportunities afforded them by a gritty Bruins squad.  After the Bruins took a 1-0 lead in a lopsided first period where game play favored the Penguins but the scoresheet favored their opponents, the team started to come unglued.

A five-minute major boarding penalty to Matt Cooke appeared to set off an already-frustrated Penguins team. Further aggravating the team and its fan base was a similar play that followed, with Pittsburgh’s James Neal going down on a hit from behind that resulted in only a minor to Brad Marchand. While the second violation looked to be far less egregious than Cooke’s play, it still had fans – and players – questioning the call

Tempers boiled over as referees Chris Rooney and Brad Watson stood watch. Literally. They stood and watched as the game began to spiral out of control. Things went from chippy to dangerous, nearly resulting in a fight between the teams’ respective captains as Crosby and Chara jawed at each other at center ice. The violence culminated in an unlikely bout between Evgeni Malkin and Patrice Bergeron late in the period.

Rooney and Watson continued to let them play in the third. The officials kept their whistles in their pockets over the final twenty minutes of play, calling only a late slashing penalty against Sidney Crosby.

Part of the Penguins’ frustration may have stemmed from their inability to generate offense on the power play. Their playoff-best power play (26.0%) generated six shots but was unable to convert on the team’s first two chances. The team ended up with three minutes on the man-advantage after Cooke’s hit, but were unable to even muster a shot. Following the controversial hit, the Pens went 6:12 without a shot on goal, getting outshot 22-16 over the remainder of the game.

After the game, Pittsburgh head coach Dan Byslma acknowledged the opportunities lost on the power play:

We didn’t capitalize on the power-play chances that we had. Those were big opportunities, especially the one at the end of the second going into the third.

He also spoke about the challenges the team created with their penalties, especially with Malkin off for five minutes for fighting:

I don’t think the situation at the end of the second period was in our favor. We had a power-play coming out of the third period [and had] two of our power-play guys off the ice with those altercations. That’s not something we certainly want to be into. Don’t want to make the game that way. We want to play five-on-five.

Starting really at that point in time, with those guys going off the ice, it did I think get us off our game. I think we could have come out and scored a power-play goal, it would have been different. We weren’t able to get back at our game after that power-play.

Pens captain Sidney Crosby was a little more direct in his criticism of the officials. He gave it to them on the ice – arguing each time he was penalized – and after the game, as reported by the Pittsburgh Post Gazette:

“It’s tough. They’re letting a lot go out there, and the more it gets like that, the more it’s going to escalate. You can only control and channel that stuff so much. You keep letting guys do that stuff, you’re just going to push the envelope. That’s something we obviously want to stay away from, but it’s kind of a natural thing when it gets like that.”

“I think it was just hard to gauge. Interference calls [made] where you barely catch a guy, and then you’re allowing punches to the head and extra stuff. It’s hard to get a gauge as a player.

“Are we going to play, or are we going to call those little things once in a while? It’s hard to get a temperature on the game when that stuff is going on. Then you let a few of those go and everything starts getting out of hand. We’ve just got to focus on playing.”

George Malik of The Malik Report over at Kukla’s Korner defended Crosby and called out the officials on the way games have been called in the postseason:

Being the playoffs, when there is no standard of officiating or standard enforcement of rules, teams don’t play on eggshells–they stamp on them–but the more and more they push the boundaries of what’s legal and what’s just ridiculously, stupidly dirty, the more it appears that officials who seemed to have a quota of five or six penalties to call per period during the first six weeks of the regular season have been instructed to stand by and watch.

Yes, this stuff is “part of hockey,” and it tends to increase when teams are battling for their post-season lives and their chances of winning a Stanley Cup, but we’ve gotten to the point where games are being decided on make-up calls or penalties that aren’t being called 2/3rds of the time, and there’s so much chirping for so many extended periods of time that it almost appears that the NHL has instituted a mini-debate requirement for both teams during the course of each period of regulation time.

If Pittsburgh hopes to split this homestand and head to Boston with a guarantee that the series will return to the Steel City, they need to stop trying to play the same style that lost them Game 1. They need to go back to their game and focus on offense. Most importantly, they need to stay out of the penalty box. Our own Justin Glock implores the team to drop the undisciplined hockey and stop being distracted by the officials. (That means you, Sidney Crosby.)

While Boston’s power play has been good (19.4%), Pittsburgh’s has been much better (26.0%). The Penguins have also had significantly more chances, with 50 opportunities compared to the Bruins’ 36. As a result, the Penguins have relied more on the man-advantage to drive their scoring. The Pens are 7-1 when they score a power play goal, and only 1-3 when they fail to convert. On the flip side, the Bruins don’t necessarily need their power play to win games. They’ve posted a record of 4-1 when scoring on the man advantage but are also an impressive 5-3 when they fail to score with the man advantage.

Pittsburgh needs to convert on their opportunities. They need to limit their penalties as well, but most of all, they need to avoid falling into the trap that cost them the opening game.  Playing mean and nasty may prove your point, but it won’t win you Game 2.

McCauley and O’Halloran, especially watching the events of the opening match, will certainly be keeping a tight grip on things. Expect some penalties in the first to set the tone, and matching minors whenever possible to establish a tight grip without factoring into the decision of the game.   Unless it’s obvious, these two refs – two of the best this postseason – will avoid a call that would sway the decision.  They’ll let the teams settle it on the ice, but they won’t allow it to devolve into the mess we saw on Saturday.

If the Pens play it right, that should work to their advantage.