In the 130th meeting of the San Jose Sharks and Anaheim Ducks, a sparse crowd at the Honda Center witnessed a replay of sorts as the Sharks once again allowed a late third-period goal after clawing back from a two-goal deficit.

San Jose spotted itstheir opponent two goals for the second game in a row. The mixed defensive pairing of Marc-Edouard Vlasic and Brenden Dillon struggled to clear the puck, and Martin Jones bobbled the rebound. The puck dribbled out to Rickard Rakell, who started the scramble in the San Jose with a centering pass and smacked home the rebound to give the Ducks the early lead less than five minutes into the opening frame. The two teams would trade solid scoring chances with most of the Ducks’ shots ending up on netminder Martin Jones, who was forced to be sharp early.

At the 4:44 mark, a Nick Ritchie centering pass hit Antoine Vermette in stride, and the former Arizona Coyote snapped a shot five-hole on Matin Jones, and for the second straight game San Jose suddenly was in an early 2-0 hole. Trying to get some energy into the Sharks’ legs, Tommy Wingels took on the larger Joseph Cramarossa in a spirited bout to the left of Martin Jones late in the first. San Jose would get an opportunity late after some hard work by Joonas Donskoi to draw a hooking penalty on Rakell at 17:53. In the dying seconds of the first period, Brent Burns potted his 12th of the season after Vlasic kept in the Cam Fowler clearing attempt. Patrick Marleau took the puck to the left of Steve Bernier and hit a streaking Burns, whose one-timer cut the Ducks lead in half with under six seconds remaining. The late goal would be the third tally in the last three games for the Sharks’ All-Star defender.

Tommy Wingels would add to his penalty minutes total when he took a tripping penalty early in the second. The Ducks, with the third best power play on home ice in the NHL, would be thwarted, as the Sharks’ penalty kill would allow four shots on Jones but not surrender a goal. Mikkel Boedker would have his best look of the night seven minutes into the middle period coming in on Bernier on his off wing. Bernier would get his right pad on the shot, and Donskoi shot the rebound wide. The Sharks would pour on the pressure, forcing Bernier to make some solid saves, including a partial break for Melker Karlsson. The pressure would pay off in the ninth minute as Kevin Labanc would get his third goal of the season on a perfect cross-ice pass from Logan Couture. The California rivals would head into the final period of play tied with two goals apiece.

The Sharks would have an excellent opportunity to take the lead three minutes into the final period, as Joe Pavelski missed an open net after Joe Thornton beat a falling Cam Fowler to the puck deep in the Anaheim zone.

The two teams would play back-and-forth hockey as both defenses would bend but not break. For the Sharks, Marleau showed jump as the 37-year-old winger helped the Sharks hunt for the go-ahead goal. The Ducks would wrestle away the momentum in the 12th minute of action and force Martin to make a pair of big saves to keep the game close.

The Ducks would capitalize on the pressure, and Hampus Lindholm would get his first goal of the season as Nick Ritchie fed the Swedish defender at the top of the left faceoff circle, and his wrist shot beat Jones with 5:38 left in the third period. In the end, Lindholm’s 24th career goal would be the difference despite a late frenzy for the Sharks. 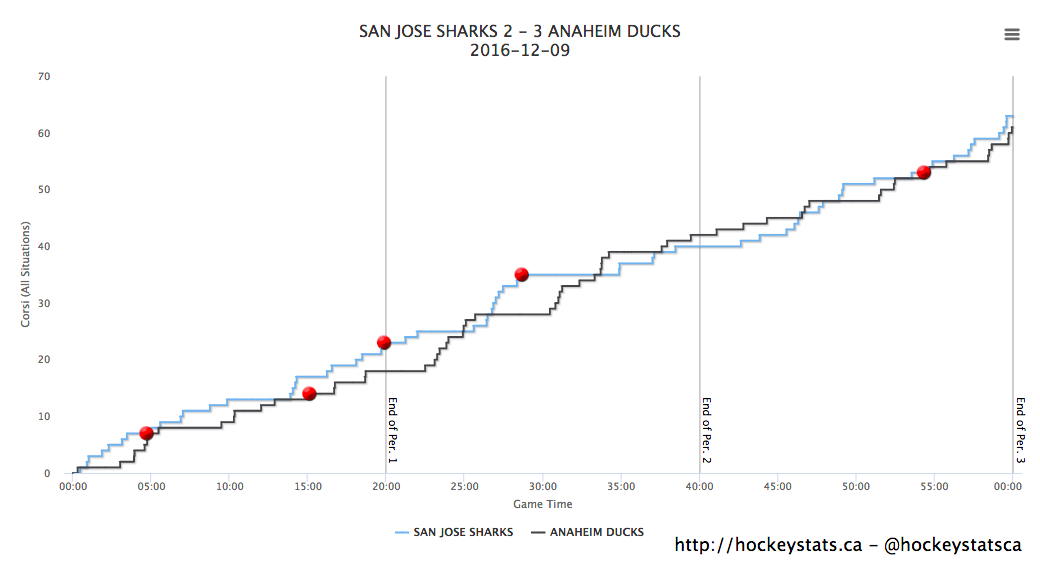