Fundamentally, hockey is a game of emotion. At high-speed, the exhilaration and anxiety in every hit, goal, or save may not be seen immediately. However, the thrill of the game is felt as Alec Martinez sends his gloves airborne following his Stanley Cup winning goal, and Henrik Lundqvist lies in anguish, face down on the ice. It is common for life to imitate art, and in these anti-mimetic scenes, there is a relationship to the rising action and conflict of famous works.

Like observing a painting, the NHL spectator sees two images. Those sitting on the glass experience the impact of every glass-bending body check. They make eye contact with the players and feel their frustration as the score narrows by a single goal. These viewers see every detail of a professional game, struggling to rubberneck as play careens to the opposing end, like peering  at every brush stroke, delicately placed to complete a canvas.

Those near the rafters perceive an entirely different game. Standing back from the action, the spectator observes the play unfold. They may not see the pieces of the puzzle, but the big picture is evident. A proper understanding of the art of hockey is best perceived both up close and at a distance.

Like the iconic paintings Caravaggio and his followers produced, the best photos depicting the game are those of escalating action or ebullient emotion. There are fitting examples in every game of hockey, recent or classic, that “totally look like” moments the great masters of painting would have captured.

Antoine Roussel and Clayton Stoner – The Sacrifice of Isaac by Caravaggio There are few players who look as quintessentially Baroque as Antoine Roussel. The French forward throws caution to the wind, and his heart and soul into the game. Known for fighting the highest scoring opponents, Roussel’s facial expressions of outrage and surprise lend their comparison to numerous works.

Clayton Stoner and Abraham also share similarities in these two images. As both assailants take their victims by the neck, an authority figure, whether angel or referee, dissuades their actions. 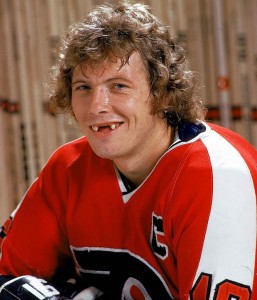 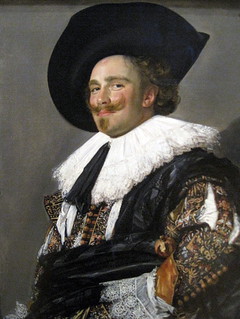 Dutch golden age painter, Frans Hals, appears to have depicted a young Bobby Clarke centuries before he played in the NHL. The title of this famous painting is also apt, as Clarke appears cavalier in demeanor. Viewers say that the cavalier’s eyes follow them around the room, and Clarke’s photo does the same due to the subjects’ similar expression and focal point.

1980 Miracle on Ice – Liberty Leading the People by Eugène Delacroix

Heinz Kluetmeier’s photo of Team USA’s 1980 Miracle on Ice is iconic in more ways than one. While this image captures the team’s joy and their place in hockey history, it also mimics Delacroix’s romanticized perspective of the 1830 July Revolution, imbuing multi-faceted symbolism on the photo that needed no caption. As the players and Liberty lift their sticks and flags to the sky, a dramatic scene of excitement envelopes the primary subjects at the height of their victory.

Like the subjects of La Primavera, the Los Angeles Kings join together in celebration, lifting their arms to embrace after the Stanley Cup winning goal. Both images are a celebration of Spring, though one group is more excited about April playoffs than May flowers.

This iconic image of Bobby Orr launching over the ice following his 1970 Stanley Cup winning goal mimics Daedalus soaring as Icaraus falls. Fortunately, Orr’s success was not as short-lived, though his career is also described as legend.

Referee Waving “No Goal” – Assumption of the Virgin by Annibale Carracci Steven Walkom blows the play dead while the puck is still loose, mimicking Mary’s famous gesture. Carracci’s apostles, meanwhile, insist that Mary should call it in. There is also a triangular structure between the subjects of each image, moving the viewer’s eye around the scene clockwise.

The Sedins Watch a Replay – Cherubs from the Sistine Chapel

While the other comparisons in this set show varying degrees of escalating action, elation, devastation, and aggression, it is not  complete without comparing the Sedin twins to Raphael Sanzio’s cherubim. From their perch on the ceiling of the Sistine Chapel, the matching Cherubim could also be watching themselves on the Jumbotron. Sure, they weren’t invented yet, but that doesn’t mean these little angels can’t dream of a future with the Vancouver Canucks.

Like the famous painters who came centuries before, NHL photographers immortalize ephemeral and climactic moments in every game. Unlike these painters, however, photographers do not have the luxury of capturing these moments over time. They must anticipate every historic goal, save, fight, or flight before it occurs. The sports photographer must capture exhilaration and anguish in real-time, making sure not to miss a moment.

While the famous artists of past eras practiced making their paintings appear life-like, modern action photographers shaped their artistic perspectives around these classics. Though the “Old Masters” and modern photographers never shared the same responsibilities, learning and understanding the painters’ interpretation of rising action and emotion shapes how we perceive sports photography today.