As the December cold settles in and the 2012 IIHF World Junior Championships rapidly approach, international hockey clubs work hard at setting their competition rosters. This winter, as many as six Calgary Flames prospects could be hitting the ice in Alberta for world supremacy.

The younger brother of Minnesota Wild prospect Mikael Granlund, Markus joined his brother with HIFK Helsinki this season after spending time with HIFK’s junior club last year. Granlund was drafted by the Flames in the 2011 draft in the second round (45th overall) with one of the picks acquired in the Tim Erixon trade. He has 15 points in 24 games with HIFK so far this season.

Hailing from Needham, Massachusetts, a suburb of Boston, Bill Arnold arrived in college last year and made a pretty big impression. He made Hockey East conference’s All Rookie team and helped Boston College win their conference title. For his encore, he’s one of the team (and the conference’s) leading scorers, as the Eagles continue to sit atop Hockey East. Arnold was Calgary’s fourth round choice (108th overall) in the 2010 draft.

Easily Calgary’s smallest prospect in terms of size (he’s listed as 5-foot-7 and a 150 pounds), Gaudreau arrived in town for development camp over the summer and turned heads with his skill with the puck. He joined Boston College this season after excelling with the USHL’s Dubuque Fighting Saints last year, winning the league’s Rookie of the Year honours as the team won the league’s championship. 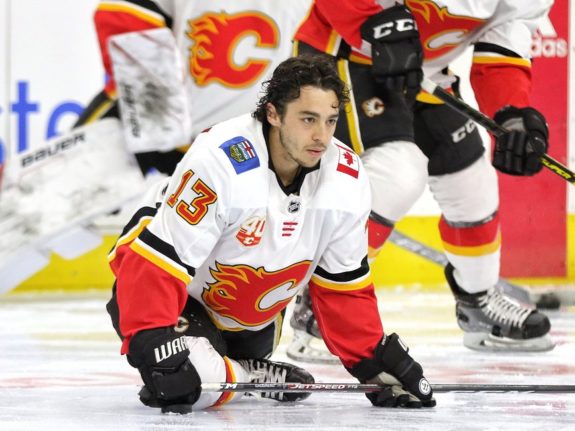 He’s among Hockey East’s highest scoring freshmen thus far. Gaudreau was Calgary’s fourth round choice (104th overall) in the 2011 draft and is a native of Carney’s Point, New Jersey.

The son of former Calgary Flames standout Paul Reinhart, Max made a big jump in his development last season, leading the Kootenay Ice all the way to the Western Hockey League’s championship and earning a berth in the Memorial Cup. While the Ice didn’t capture the Memorial Cup, Reinhart definitely announced his arrival on the big stage. He’s presently amongst the WHL’s leading scorers as the Ice sit near the top of the league’s standings. Reinhart was Calgary’s third round choice (64th overall) in the 2011 draft, and was the Flames first pick in the draft.

If there’s one big surprise in Calgary’s prospect pool, it may be Michael Ferland. The Brandon Wheat Kings forward was chosen by the Flames in the fifth round (133rd overall) and quietly chugged away at a point-per-game pace last season. This year, partnered with WHL stand-out Mark Stone, Ferland has erupted for 42 points in just 29 games (9th in the WHL). A spot on Team Canada may serve as an even bigger sign to the hockey world that Ferland has stepped his game up to the next level.

A late cut of the Flames out of training camp, Sven Baertschi is a very good hockey player. What’s the proof behind this statement? Despite missing a week due to his attendance at Flames camp and some time due to a hip injury (a total of 9 games), Baertschi has 49 points. He’s scoring at a pace of more than 2 points per game. Calgary’s first round choice (13th overall) in the 2011 draft, Baertschi will likely contend for a spot with the Flames for 2012-13. For now? He’ll probably settle for a World Junior medal.

Of the six Flames prospects, there’s a varying degree of certainty that they will be at the World Juniors. Of the six, arguably Gaudreau, Reinhart and Ferland are in tough. Gaudreau’s one of a handful of 1993-born players on the USA prelim roster. Reinhart and Ferland are tearing up the WHL, but the Canadian roster has a pretty wide cross-section of players, and a lot of the other players are more established in Hockey Canada circles. Baertschi and Granlund are virtual locks for their countries, and Arnold should have a good shot at the American roster.

Still, the increased involvement of Flames prospects in the World Juniors continues a recent trend.

PAST REPRESENTATION
Reflects players whose rights were held by the Flames at the time.

Note: A previous version of this story mistakenly referred to Boston College’s hockey team as the “Terriers.” That is, of course, not the case. Stick tap to the THW commenters for the head’s up!