The St. Louis Blues have been struggling for quite some time. From a division title contender in November to now being out of the playoff picture entirely, the fans have lost in faith in Mike Yeo, Jake Allen and the entire defensive corps. There are 16 games left in the 2017-18 regular season, and the Blues are two points out of the final wild card position. Time is running out for the team to turn it around.

Jay Bouwmeester is injured, again. With Bouwmeester out for the rest of the season, the Blues will be leaning on young defenders to carry them the rest of the way. For the upcoming California road trip, Vince Dunn will move up to pair with Colton Parayko, which means a larger share of responsibility for the rookie. Dunn has over-achieved this season for the parent club and to many he has been one of the highlights of this team. Through 59 games he has 16 points, including four goals and an impressive plus-seven.

On the other hand, Jordan Schmaltz has been disappointing for many fans. His play has been less than stellar and his production isn’t close to being enough to justify his place on the team. In his seven games with the parent club, Schmaltz has zero points and only two shots.

Joel Edmundson is close to returning and the Blues need him badly. But what they need even more is for him to return healthy. His 15 points and 53 penalty minutes are sorely missed right now. The Blues are being pushed around left and right in their own defensive zone, and have no protection for their stars without him in the lineup when things get physical.

A Terrible Month of February

The boys in blue dropped nine of 13 games in February, including an abysmal seven game losing streak where they were shut out twice and gave up 29 goals. You read that correctly: in seven games between Feb. 11 and Feb. 27, Blues goalies gave up 29 goals. We can blame anyone that will make you feel better about those numbers. Jake Allen regressed drastically with 23 goals surrendered and only one win for the whole month. Carter Hutton didn’t do much better; he managed a meager 3-3-1 record with 17 goals against for the month.

But it’s not fair to put this all on the goalies. In that same seven game stretch the offense was as anemic as they have been all season. 10 goals were scored by the Blues during their losing streak, and two of those games had three goals scored. Which means that in five of the seven games the Blues scored a combined four goals. Two shutouts, which occurred in back to back games mind you, showcased the struggles to the whole league.

I’ll give you a second to digest those terrible numbers. It was a month to forget, not even a big win over the Winnipeg Jets on Feb. 9 can really give any hope for the rest of the season. BUT there is still hope.

At the end of the day on Mar. 8, 2017, the Blues were one game over .500 and had 71 points, good for fourth in the Central Division. Flash forward to this season and the Blues have 75 points and are nine games over .500. The problem is that the Jets, the Dallas Stars, and the Colorado Avalanche are all player better this year than they did last season. The Nashville Predators are improving on their stellar campaign from a year ago, and the Minnesota Wild are right there again in the mix after a slow start.

The Blues finished last season with 46 wins and 99 points, going 13-2-2 from Mar. 8 on to make the playoffs as the third seed in the Central. If they can go on a similar run this year with the team they have assembled they would break 100 points and be well into a playoff position. 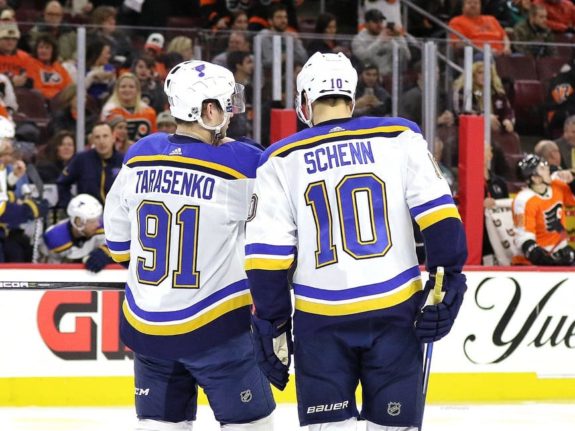 The season is NOT over, in fact there’s a large enough chunk left that the standings can be radically changed by a big winning or losing streak. Vladimir Tarasenko has seemingly found his scoring touch again, Brayden Schenn is continuing to be a consistent offensive force, and Alex Pietrangelo is playing the best you can expect out of a player who is scrutinized by fans for every action and inaction. The Blues can recover, and with the support of the fans and the city, there’s no reason to believe they can’t.