OK, obviously no goalie deserves anything based on a singular save. However, the stop by San Jose Sharks backup netminder Alex Stalock off of Pittsburgh Penguins star Evgeni Malkin on Sunday was a thing of beauty. It was one of 31 saves on 33 shots to help keep the Sharks’ razor thin playoff hopes alive.

Push across, full splits, puck labeled for the top corner, and a blocker save and a beauty!  The Sharks were down 2-0 at the time and a third goal would have been a back breaker. Stalock absolutely stoning Malkin allowed San Jose to come back and tie the game 2-2 before losing in a shootout. The 27-year-old goaltender is still extremely raw in terms of NHL experience, having made just 33 NHL starts over his first two seasons. Goaltenders often take longer to develop but Stalock is even older due to a freak nerve injury that set him back in 2011. Shortly after winning his NHL debut in a 4-3 relief appearance, Stalock was stepped on by Dwight King. The fact Stalock has made it all the way back is a bit of a minor miracle in its own right.

You can’t help but root for a guy like Stalock. The Minnesota native has long had the reputation in the lower levels as the guy who makes the big save when the team needs it. And for Stalock to have made it all the way back from such a gruesome injury is a testament to his work ethic and his love of the game. He truly is a guy of tremendous character. But because of the quality person that he is on and off the ice, it makes it all the more disappointing that the Sharks seem unwilling to give him a real opportunity. It is not like Antti Niemi has proven himself to be anything but an average goaltender.

With Niemi being extremely inconsistent and unsigned next season, it has been a surprise to many why Stalock hasn’t seen more time between the pipes this season. His save percentage is currently a disappointing .902 but that is actually a higher percentage than Niemi has posted in two of his four postseasons with the Sharks. Furthermore, Stalock turned in a .932 save percentage last season behind a much stronger Sharks team. Neither sample size is big enough though to really judge what Stalock is capable of. Only 18 starts last season and 15 starts this season are not enough to prove whether or not Stalock can be a No. 1 goaltender in this league. Sure, he didn’t put up great numbers with AHL Worcester, but Niemi was also unspectacular numbers wise in the lower levels. Unfortunately, even if Niemi doesn’t return next season, it doesn’t seem like Stalock will ever get his chance.

Deserves Much More From Management

If the Sharks were really interested in giving Stalock a shot to prove himself, this would have been the season to split time equally between the two netminders. San Jose began the season that way with each goaltender starting three of their first six games. That rotation randomly stopped though after just six games despite Stalock having stopped 97 of the first 104 shots he faced. Say what???? That’s right, despite sporting a .932 save percentage three games into his season, Stalock started losing ice time. Even with Niemi in a contract year, the Sharks have failed to give Stalock a chance to prove himself over a consistent work load. If I were a betting man, I would bet the combination of GM Doug Wilson and head coach Todd McLellan have already come to the conclusion that Stalock is nothing more than a backup in the NHL. Based on what exactly? Now that is a good question. 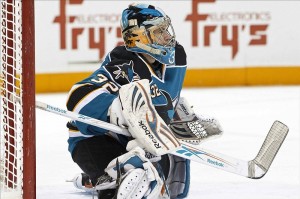 Stalock has played terrific against some big time opponents in his small samples the past two years. His 31 saves on 33 shots against the Penguins Sunday, shutouts against Montreal and Winnipeg earlier this season, and a 33/35 performance in Chicago last season. The truth is the Sharks labeling him a backup is a rush to judgement, a rush to a conclusion, something that Sharks management has done far too often these days. Regardless of good or bad samples, the Sharks are overreacting to small sample sizes and it is killing them.

While no starting goalie in the NHL consistently puts up a .932 save percentage, if given 40 plus starts in a season, I would fully expect Stalock to be over .910. That is more or less the barometer of sufficient NHL goaltending. Anything below .910 isn’t very good, but .910-.912 isn’t bad, .913-.916 is average, .917-.920 is good, and anything above .920 is nearing Vezina territory. Watching Stalock the last two seasons, it is hard to imagine him being so bad that he clearly drags the team down while starting half of the games next year. After everything he has been through, he deserves the chance to get that kind of playing time regardless of who else they bring in for next season. If come the end of next season Stalock has played 41 games with a sub .910 save percentage, than that will have been a much stronger indication that he isn’t good enough to be a starter. Writing him off though after playing just once every couple of weeks for two seasons is quite simply a waste of an asset.