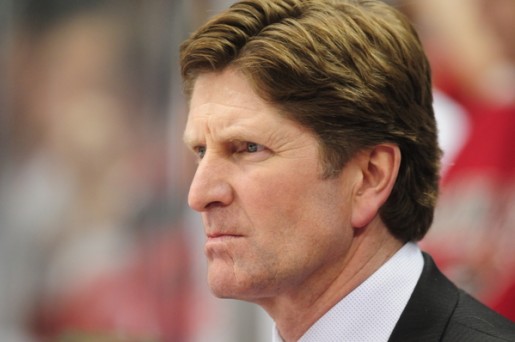 After a well-played game against Tampa Bay on Saturday, the Detroit Red Wings special teams struggled Sunday against the New York Islanders in a 5-4 loss.

Coach Mike Babcock was coaching with a heavy heart, as his father, Mike Babcock Sr., passed away Saturday night. The team gave him something to smile about early with two goals in the first 1:46, but they weren’t able to sustain the lead for very long.

Petr Mrazek got the start in net for the Red Wings after posting a shutout against the Lightning, the Red Wings’ likely first-round opponent in the playoffs.

However, Mrazek looked very shaky against the Islanders. He allowed three goals in a span of five minutes in the first period and was yanked 16 seconds into the second period after allowing the third power-play goal.

However, it wasn’t all on Mrazek, as the Red Wings defense continues to turn the puck over and make life difficult for their goalies.

Babcock was coaching for more than just his team Sunday, after Fox Sports Detroit alerted its viewers that his father had passed away.

“In the end we were praying for him to join my mom, and those prayers were answered. He’s in a better spot. Obviously, any time you lose a parent, it doesn’t matter how old you are it’s a blow.” — Mike Babcock

It appears Mike Sr. had been suffering for quite some time with congestive heart failure and bad lungs, and it might partially explain the team’s lackluster March.

Coaching a hockey team is hard enough as it is. Coaching a hockey team when you have personal, more important issues to deal with can be near impossible. According to George Malik, Babcock admired his father and was one of his role models. I can’t imagine how he must be feeling right now.

However, Babcock will be the first one to tell you this has nothing to do with his team’s poor play, even if it is the truth. My condolences go out to Mike and the rest of the Babcock family.

The Red Wings allowed three power-play goals on four opportunities. This team looked nothing like the team that killed its first 26 penalties to begin the season.

Part of it is bad positioning, as evidenced in the first power-play goal. Watch Joakim Andersson drift too far to the opposite wing, which leaves Brock Nelson extra time and space to get a shot off.

That’s also a shot Mrazek will save nine times out of 10. He got a piece of it, but not enough to make the save.

The Islanders final power-play goal completely was on Mrazek. Frans Nielsen came down the left side and shot the puck from an acute angle. However, Mrazek didn’t do a good enough job of hugging the post, and it found its way behind him and gave the Islanders the 4-3 lead early in the second period.

To top it all off, Howard allowed a shorthanded goal after Tomas Tatar fumbled the puck at the blueline and gave Cal Clutterbuck a breakaway. The Red Wings took three penalties in the first period, which is way too many to give to a team that averages 3.0 goals per game.

The Wings' goaltending right now is on par with whatever it's been for the rest of this month, NOT what it was yesterday.

Both Red Wings goaltenders are going through a tough stretch, but the bright side is it’s better to get the bad stretch out of the way during the end of the regular season than to have to endure it during the playoffs.

On the plus side for the team, the Red Wings were able to notch two goals in the first 1:46 of the game.

Tatar’s goal is a perfect example of what throwing the puck on the net can do. Danny DeKeyser takes a shot from the point despite a pretty poor shooting lane. However, it bounces up off Jaroslav Halak, and Tatar is right there to gather the rebound and put it in the net for the 1-0 lead just 39 seconds into the game.

It’s a flukey goal, but it counts just the same as a non-flukey goal.

About a minute later, Drew Miller had an equally flukey goal go in. After Tomas Jurco dug the puck out from behind the net, Miller took a whack at it from the slot and lobbed it over Halak and in the net for a 2-0 lead.

While it’s good to see the Red Wings score, since they hadn’t done much of that during March, it doesn’t do them much good if they can’t keep the puck out of their own net.

After Boston beat Carolina in overtime and Ottawa fell to Florida on Sunday, the Red Wings find themselves just three points ahead of Boston for the third spot in the Atlantic Division with a game in hand. 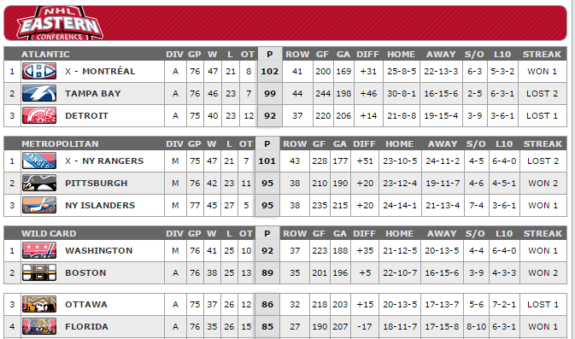 Nothing is guaranteed for the Red Wings right now. In just two games, Boston could overtake the Red Wings, and they would be looking at a first-round matchup with Montreal or the New York Rangers depending on how Washington does.

If the Red Wings haven’t felt the urgency before, it’s time now. In a perfect world, it would be nice to overtake Tampa Bay and get home ice against the Lightning, but that will require a string of wins and some Tampa Bay losses.