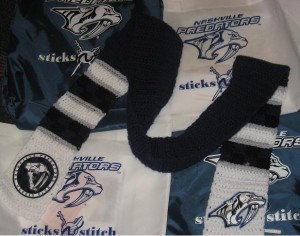 A peek inside the door of one of the livlier gatherings at Bridgestone Arena would reveal something other than the usual conference rooms full of fans in matching t shirts for a company sponsored family day or a more sedate corporate bonding retreat. There were no dress-alikes or powersuited act-alikes among the cheerful bunch who were gathered to celebrate two things they were all passionate about. What brought this mostly female group of fans together?  The Second Annual Predators Sticks-n-Stitch.

The event, which was orchestrated by Nashville Predators Fan Relations Coordinator, Rebecca Swan and Deborah Stillwell of Knit and Crochet TN attracted a room full of fans who were there to share tips and patterns and contribute to a good cause. For the Predators Foundation, this was a chance create awareness for Nurses For Newborns.  Participants who brought hand knitted hats were entered for a drawing for lower bowl tickets and a zamboni ride. 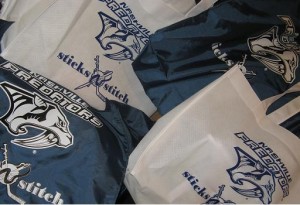 But it was wasn’t just about the prizes or the goody bags.  For Stillwell, this event shows the local hockey community how special her network of craftsmen and women can be.  Her network of almost six hundred people respond when she sends out a call for items that are needed by local agencies.  “Sometimes my office is filled with bags of handmade blankets and caps.  We provide caps for babies in neonatal units, hats for chemo patients, helmet liners and  lap blankets for soldiers and scarves, blankets and other handmade comfort items for VA patients, hospice groups and  Tennessee Special Olympics.”

“The knitters and crocheters of our group are very giving and willing to step up when someone is in need. I’m very proud of them.”    -Deborah Stillwell, Knit and Crochet TN

At first blush, such a folksy, homespun, comfortable thing as combining knitting and hockey would seem less like a spurt of cognitive dissonance and more in keeping with the down home image many have of Nashville.  However, knit and stitch events have been going on in other places for a few years.  In the NHL, the St. Louis Blues,Columbus Blue Jackets, Philadelphia Flyers, San Jose Sharks,  Dallas Stars and the Colorado Avalanche  are just a few teams who, like Nashville, have hosted  sucessful knitting events. 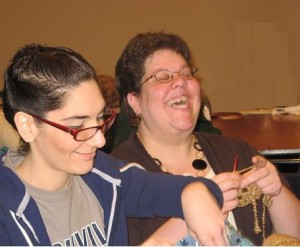 On every table were knitting bags, some full to bursting with yarn, needles and projects in progress. The busy busy talk about the afternoon game with Columbus was accompanied by busy busy hands knitting and crocheting everything from caps for infants to a lacy top that might actually be too big for its creator by the time she was finished with it. 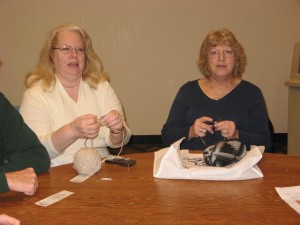 For some it was s a chance to connect with other hockey fans who share their enthusiasm for sticks, both on and off the ice. For one knitter who brought her stepdaughter to the event, it was a way to continue to encourage devotion to both activities. As she helped her step-mom sort the stack of knitted infant caps they would be donating, six-year-old Isabel declared that she had been a Nashville Predators fan her entire life.  When asked who she figured to be the most likely player on the roster to pick up a pair of needles she looked at her Mom, who had declared her allegiance to Martin Erat, and said, “Whoever the best guy out there is.  He’s a knitter.” 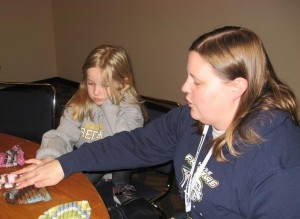 The question of which player might be a knitter brought some interesting and often raucous responses from the group, especially after one knitter shrugged and said, “Maybe the most effeminate one ?” As soon as she said this, knitters in the room were quick to say that knitting and handiwork were not exclusively women’s work. 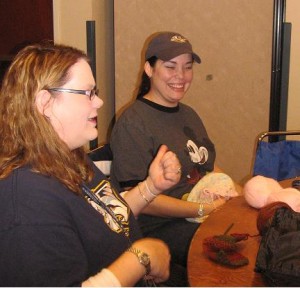 The name of football great, Rosey Grier* was invoked as one of best known professional athletes to do needlework. Then one woman mentioned that she still had baby clothes that her father had sewn for her. This conversational turn was the point where Isabel and everyone listening saw a more important connection being manifest.

Women began to share stories of fathers and uncles and grandfathers who picked up needles to help their partners. Dresses were smocked, socks were darned and handmade pieces created that were eventually  handed down for their beauty and for the memories, the connection across the years to those men who committed those labours of love, often while they were listening to or watching sportscasts. 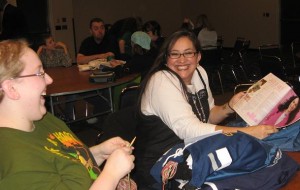 So, getting back to the question, “Who would be the players most likely to knit?” Aside from rowdy joking about great hands or the need for goalies to find something that would offer meditative focus and relaxation; the common answers pertained to players who have strong family connections: Steve Sullivan and JP Dumont, dads who have families of their own and do a lot of charitable work for children in Middle Tennessee and Jordin Tootoo, and Jerred Smithson, who are both very public about being devoted sons. 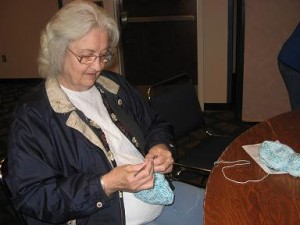 It might seem incongruous to contemplate tough players like Tootoo and Sullivan picking up a pair of needles.  It’s not really about the needles. It’s about the family connections and the continuity of handing down the love for your team and your city the way your parents and their parents and their parents loved them.  It’s the sense of history that everyone gets when people sit long enough and start telling stories.  Hockey might have been borrowed from the Canadians and the whole “Knit and…” concept might have originated in the MLB; but hockey fans all over North America are making them their own, one stitch at a time. 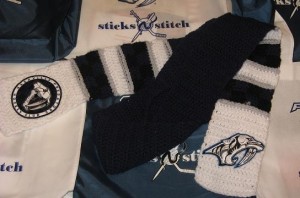 *Grier’s nephew played hockey for Boston University and is now a member of the Buffalo Sabres’ roster.