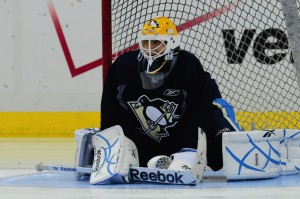 How people in the city of Pittsburgh constantly bash Marc-Andre Fleury on popular Pittsburgh sports talk shows, like Mark Madden’s popular show on 105.9 WXDX, is beyond my comprehension. To some critics, most of whom know very little about hockey, Fleury will never be good enough. Fleury hasn’t been the most consistent between the pipes in the past, but is there any NHL goaltender that has been perfect?

People thought the greatest statistical net-minder in NHL history, Martin Brodeur, was washed up at the beginning of this year. Look at Brodeur and the New Jersey Devils now, they can’t lose. Brodeur has bounced back as has Fleury from a very rocky start to the 2010-11 season. Despite the forgettable start, this season has shaped out to be the best of Marc-Andre Fleury’s young career.

Just in case anyone has forgotten, Fleury started the year 1-6 in his first seven starts. Pens fans were calling for backup Brent Johnson to take over the starting role for Fleury. Johnson filled in quite comfortably during Fleury’s struggles by posting a 6-1-1 record. Johnson had Vezina Trophy-like numbers to start this season’s campaign. He was fourth in goals-against average (1.63) and save percentage (.943). Critics continued to bash Fleury, and some demanded Fleury be traded. Do you know how many teams would’ve traded for Fleury if he were on the trade block? Almost every team in the NHL.

Although many people, including Dan Bylsma, may have doubted Fleury during this period of time, Fleury had the support of teammates in the locker room. Sidney Crosby, the Pens captain, and a figure who is always politically correct, spoke out against how Bylsma was working Fleury in and out of the Pens lineup. Bylsma hinted that Fleury had no confidence, and at the time, this was more than likely true. Throughout Fleury’s struggles, Crosby still had his goaltender’s back, and indirectly spoke out against Byslma’s decision to play Fleury sporadically instead of letting Fleury play through his struggles game after game.

“It’s not like he can change overnight. He’s going to put strings of games together, and he can’t do that with one game. With a goalie, you’ve got to give him time. He’s got to play four or five games maybe to prove that, but to sit here and question his psyche doesn’t really give him a chance.”

After being yanked from a game on Nov. 6th against the Phoenix Coyotes, giving up 2 goals only seven minutes into the game, Fleury had hit rock bottom. He was 1-6 with with a 3.53 goals-against average and .853 save percentage. Something had to give because this season could not have gotten any worse for the Pens 1st overall pick in 2003.

As most top performers in sports tend to do, Fleury silenced his critics by running off a stretch of 12 straight victories. If it weren’t for the Flower being in full bloom, and his 13-0-1 record during that time, the Pens would be fighting for their playoff lives.  Without the consistent scoring of Sidney Crosby and Evgeni Malkin, Fleury has been the backbone for the Penguins success this season.

So much of the Pens defensive improvement this year has been credited to newcomers, Zbynek Michalek and Paul Martin. These two defensive upgrades have undoubtedly boosted the defensive efforts of the Pens on the back end.

With the way that the Flower bounced back earlier in the season, and that the Pens are only two points behind the Eastern Conference leading Philadelphia Flyers, how can’t Fleury seriously be considered as an M.V.P. candidate? He definitely deserves to win the Hart Trophy as MVP as voted by the Professional Hockey Writers’ Association, or the Lester B. Pearson Award as the League MVP as voted by the players.

Despite the most man games lost in the NHL, with over 250 due to injury, Fleury has the Pens right in the thick of the playoff hunt. The Pens starting goaltender is only one win shy of recording his 4th 30-win season in the past five years. His 29 wins this season make Fleury only two wins shy of leading the NHL in victories. The only season Fleury didn’t record 30 wins, he started 35 games due to an injury in 2007-08. Don’t hold that season against Fleury either because he did take the Pens to their first Stanley Cup Finals in over a decade. The year following, Fleury captured his first Stanley Cup championship.

Some of the Flower’s best performances this season have been in losses. On Feb. 20th, against the Chicago Blackhawks, on NBC national TV, Fleury made 13 saves in the 1st period when the Pens had no business being down only 1-0. The entire 1st period was played in the Pens defensive zone, and Fleury was being peppered with shots.

With minimal scoring, there is more pressure on Fleury to carry the Pens through the end of the year and through the playoffs than there ever has been in years past. Knowing that a goaltender can carry a team through the playoffs, and that defense wins Stanley Cups, it remains to be seen what will happen.

Somehow, Fleury has always seemed to come through in the big games in the past. Remember back to game 5 of the 2007-08 Stanley Cup playoffs when the Flower made 55 saves in a triple OT thriller extending the Cup Finals to a 6th game. Marc-Andre Fleury bounced back even better the following season, putting the icing on the cake with a sprawling save against Nicklas Lindstrom. More amazing than his final save to end the Stanley Cup Finals, Fleury may have won the Cup for the Pens by stopping Alex Ovechkin on a breakaway in the opening moments of game 7 in the Eastern Conference Semi-Finals that same playoff season.

Marc-Andre Fleury should have nothing else to prove. Instead of getting criticized for his poor play in meaningless games at the start of this season, Fleury needs to be given some well-deserved recognition. He is one of the best young goaltenders, at the age of 29, in the world. Most professional athletes don’t hit their prime until they are in their 30’s. The Flower isn’t even in full bloom yet. He still has a great future with unlimited potential ahead of him.

With the number of injuries the Penguins have been dealt in 2010-11 campaign, this season has been nothing like anything anyone has ever seen. Fleury has the Pens high up in the Eastern Conference standings without the contributions of Crosby, Malkin, and a variety of other injured Pens. Fleury wins, and he wins when games count the most. Isn’t that the object of hockey to win games, and to make the big save when it matters the most? The Flower always seems to be up to the task. It’s time that people quit critiquing Fleury’s every minor mistake, and start appreciating the gem in net that the Penguins will have down the road in the future. They can start recognizing Fleury by voting for him as NHL M.V.P.