Goaltenders have always had a reputation for being a bit, let’s say, quirky. The idea behind the stereotype is that a player is crazy to put themselves in the way of a puck, bare-faced, and only lightly padded in the early days of the NHL. Even with modern equipment and substantial padding, the stereotype stands the test of time.

Playing the loneliest position in sport, goalies stand apart from the crowd. Often left to their own devices during stoppages, goaltenders find myriad ways to entertain themselves. Here are a few bloopers and strange stories in the history of goaltender folklore, both modern and vintage, that put these netminders in the spotlight.

There’s nothing more nerve-wracking for a goaltender than losing the puck, but what if the puck is lost on you? When Arizona goalie, Mike Smith, lost sight of the puck versus the Sabres in 2014, it took players and officials a moment to fully realize their reality. Not only had the puck flipped up into the back of Smith’s pants, but he also put the puck in his own net during his frantic search.

Unfortunately, Mike Smith’s infamous “butt goal” came just two months after his first career goal versus the Red Wings, a point that made him the 11th goalie to score an NHL goal.

Known for his unobtrusive demeanor, Stars goaltender, Kari Lehtonen, likes to take a seat from time to time. Most recently, Lehtonen took his perch in a 7-3 win over the Flames, but he also hopped up on the net once in a while during his time with the Thrashers. 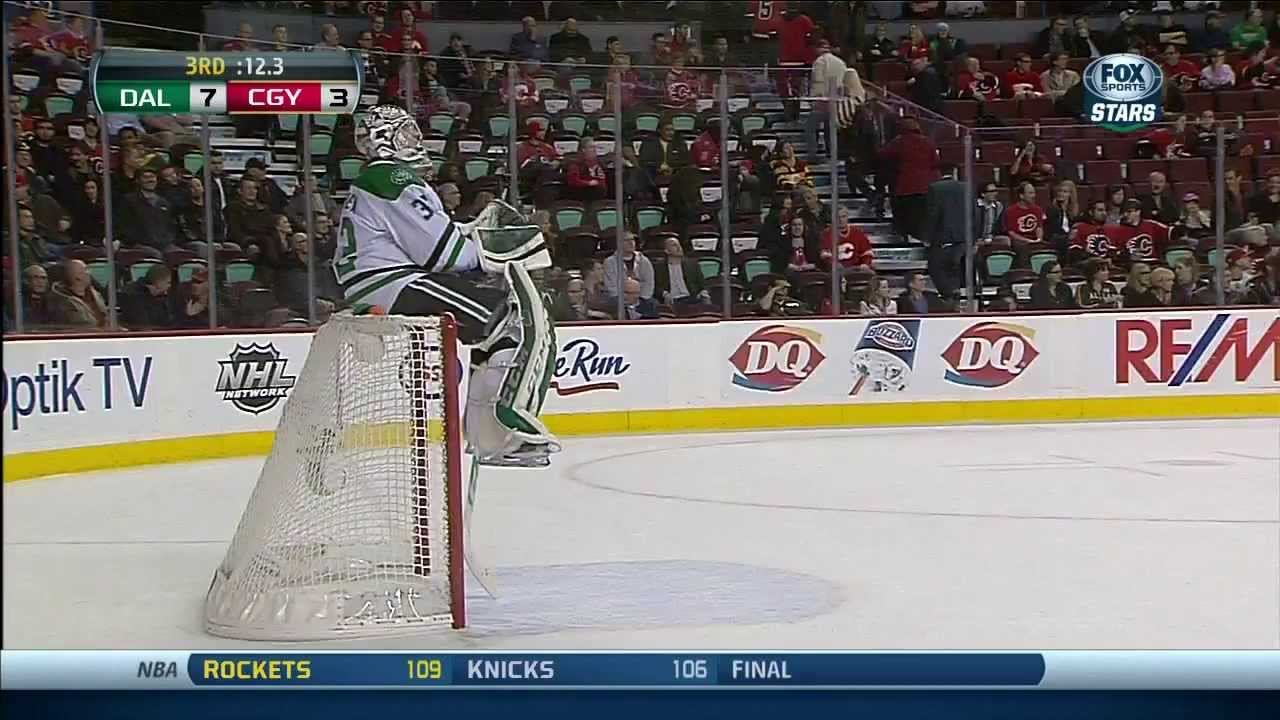 The 2014-15 season saw its share of goaltending flubs. Anton Khudobin found a little help from his friends while returning to the bench. Antti Raanta’s journey to the bench didn’t end so well, however.

Anton Khudobin struggling to get in the bench 😂 https://t.co/M9Ah1Pb5vD

Antti Niemi instead tripped near his own net in 2013. Losing the puck at a strange angle, Niemi narrowly avoided catastrophe:

Sometimes it’s difficult for a goalie to get back up under all those pads, as Eddie Lack demonstrated shortly before Vancouver’s stint in the 2015 Stanley Cup Playoffs.

Last, but not least, Ilya Bryzgalov leads the list of goalie tumbles with this snafu versus the Predators in 2014. Known for his interesting interview commentary, no list of strange goaltending tales and bloopers would be complete without him.

Primarily recognized as the first NHL goaltender to wear a mask full-time (following Clint Benedict who donned the first mask in the NHL in 1930), Plante possessed a few more unusual stories and hobbies.

For one, Plante took up knitting as the child of a large family. Known for making his own undershirts, tuques, underwear, and even a coat for his wife, Plante enjoyed a pastime that took his mind away from the stress of goaltending. While other players played cards while travelling on the road, Plante chose to spend his time knitting.

In his childhood, Plante’s family of 13 children could only afford makeshift goaltending equipment, including a goal stick that his father carved from a tree. Later in life, Plante appeared in various theater performances, including the Nutcracker.

[Related: Jacques Plante: The Man in the Fiberglass Mask]

5. Patrick Roy Kisses the Posts, and Other Goalie Superstitions

Bill Ranford had a habit of tossing the puck and catching it on the back of his glove before allowing the linesman to take it, while Ron Tugnutt insisted on skating figure eights in the crease and never bringing a water bottle on ice. Patrick Roy relished kissing the posts before games, and never stepped on the lines, but instead, over them. Despite his supposed superstition, Roy didn’t seem too worried about the icing line when he tried to dangle Wayne Gretzky in 1997.

Many goalies have danced for their fans, including Andrew Loewen who performed his viral version of the wobble, and Jacob Markstrom whose subtle moves weren’t overlooked. Hudacek, however, takes the goaltender celebration to a whole new level. Participating in games of leap-frog, with a few cartwheels thrown in, the Slovak netminder also performs kayaking and ice fishing improvisation to celebrate wins. 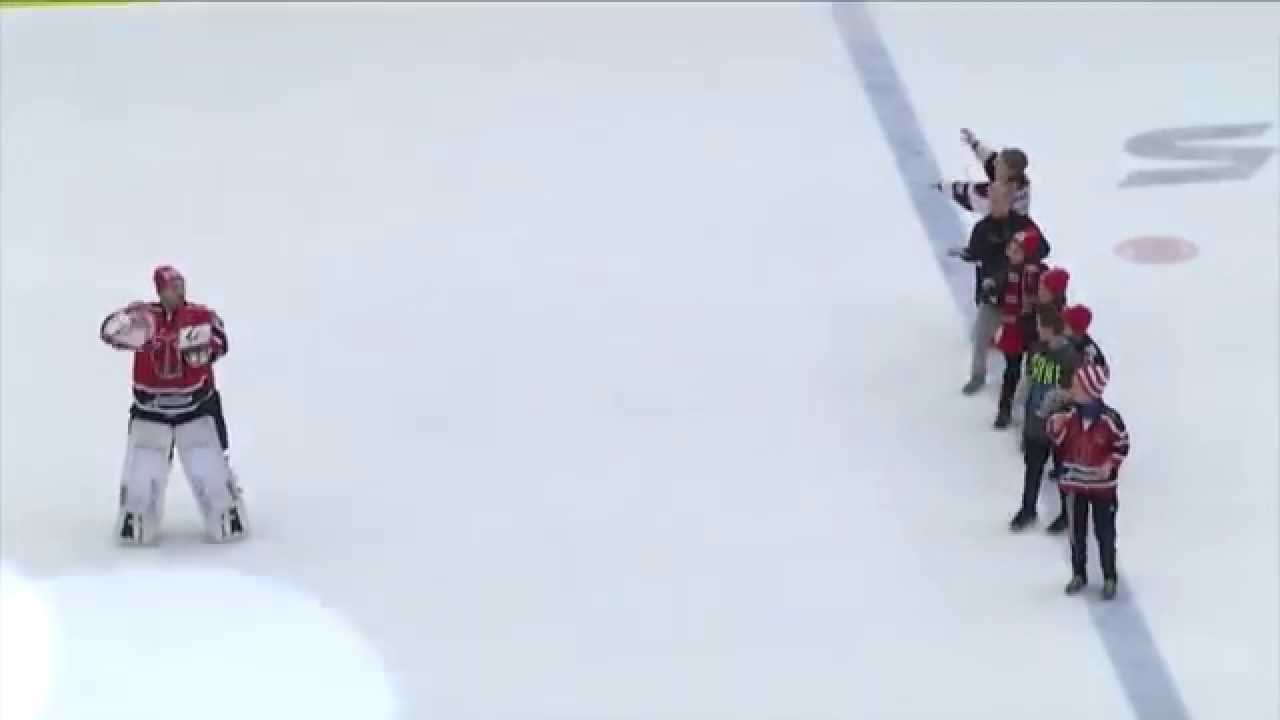 Is there a NHL color analyst with as colorful diction as Daryl Reaugh? The former Oilers and Whalers goalie has been with the Stars through most of their tenure in Dallas, but found the spotlight during the Twitter age.

"They're as organized as hippies at a love in right now!" – @Razor5Hole #Razorisms

In recent seasons, fans highlighted Reaugh’s expressions with the hashtag, “#Razorisms.” A few notable motifs include “mastodonic” wins, the “terrarium of iniquity,” and referring to Jamie Benn as a “dainty barbarian”. Reaugh received national attention for his particularly notable call on Benn’s coast-to-coast goal in 2014:

Tweeting under the handle, @Strombone1, Florida goaltender, Roberto Luongo captivates readers with critical humor and sarcasm. Luongo’s tweets are rare and inconsistent, but beautifully reflect the sardonic, melancholic humor of an off-season goaltender playing in a nontraditional market.

Great to be back on the ice doing what I love again…… pic.twitter.com/1do7XtwgZY

Donning a snarling dog mask, Curtis Joseph, or “CuJo” as he is known, displayed a historic temper. Attempting to attack a referee during the 2000 Stanley Cup Playoffs defined Joseph’s playing career, though the 2000 King Clancy Memorial Trophy winner puts great effort into his leadership and humanitarian efforts.

As the youngest, adopted child in a family of six children, Joseph didn’t receive the typical support from his family. According to Joseph, his parents didn’t attend his games or practices, leaving him grateful to his childhood community for helping him reach his goals. After a rough start playing college hockey in Saskatchewan, and later Wisconsin, the Blues invited the undrafted goaltender to play under coach, Brian Sutter.

Years later, during his time in Detroit, Joseph received a call from Wayne Gretzky, then coach of the Coyotes, asking him to play in Phoenix. When Joseph later found himself without a contract, he played in the Spengler Cup following a prolonged break from game play, still managing to lead Canada to a gold medal win. By the end of his quirky and disjointed career, Joseph accumulated 454 career wins, the most of any goaltender who never won the Stanley Cup.

Despite retiring at the unripe age of 24, Gilles Gratton made a reputation for himself in the proverbial annals of hockey folklore. For one, Gratton wore one of the most interesting and widely recognized masks in NHL history. His snarling, tiger-faced visage took on a character of its own, diminishing the man behind it. 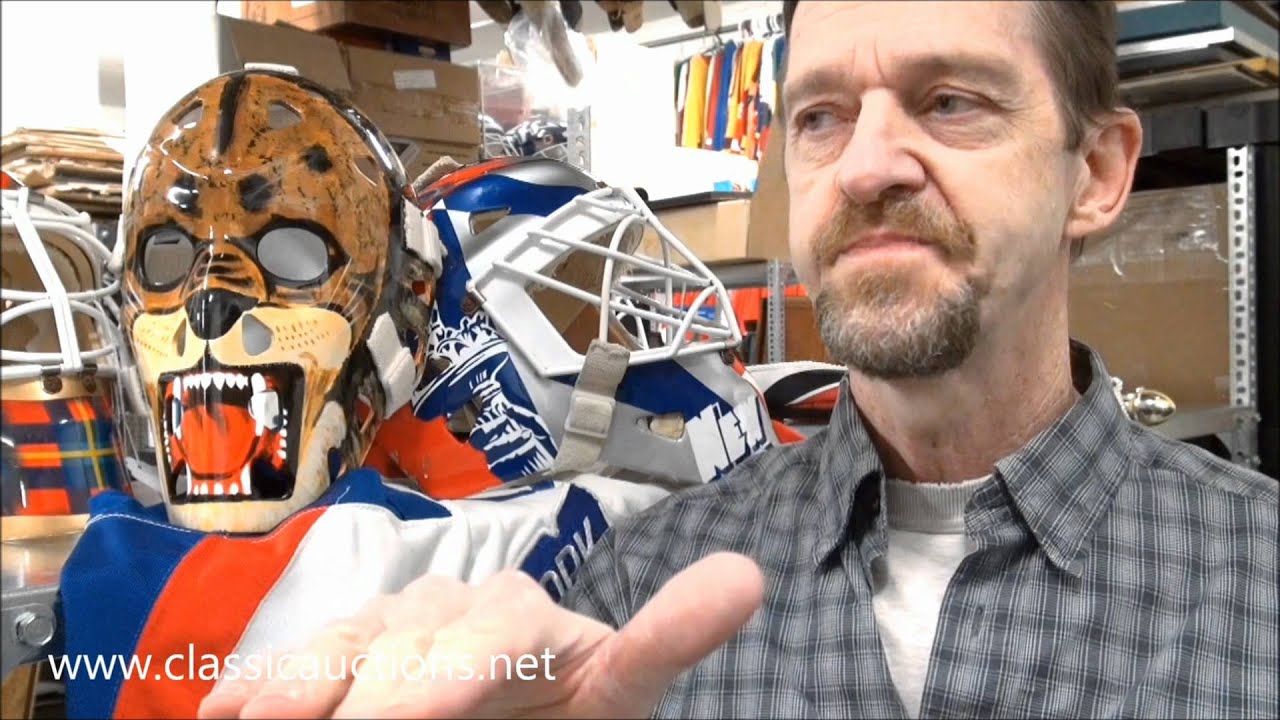 The former Blueshirt and Blues goaltender, also known as “The Count,” claimed to know the history of his past lives, including one during which he was a Spanish Count who liked to throw rocks at local commoners. As a result, Gratton insisted that being a hockey goalie was punishment for his past-life indiscretions.

Despite having never taken a lesson in his life, Gratton in said to play intricate classical piano that amazed fellow hockey players. Gratton only completed one full season in the NHL before retiring, but would refuse to play if the moon was in the wrong position on a particular night. Legend has it that “Grattoony the Loony,” was last known to live in an abandoned castle while working as a photographer. Of course, with Gilles Gratton, one is never sure.

Whether the craziest behavior occurred before a nationally broadcast NHL game, or in the relative obscurity of the European minor leagues, these goalies’ strange and hilarious behavior takes center stage. Skaters in the NHL make a name for themselves though point scoring, but these goalies generate tales and legends that will carry on for years to come.