As the Dallas Stars defeated the Montreal Canadiens 4-1 to end their 4-game losing streak, puck possession, special teams, and fewer penalties played a significant part in pulling the team out of yet another nosedive. The Stars have struggled to post points against the highest and lowest teams in the standings, floundering even in their recent wins. The home win versus the Habs, however, showed the Stars play a solid game from end to end, powering through the third period to score an empty net goal that ensured their second 3-goal win of the season. While this game featured its share of weak points, including a shorthanded Manny Malhotra breakaway and several unnecessary penalties, the Stars’ positive play far outweighed their moments of negligence. As this appeared to be the first complete game of the Stars’ season, there are a few factors indicating a turning point that could push Dallas to the playoffs. 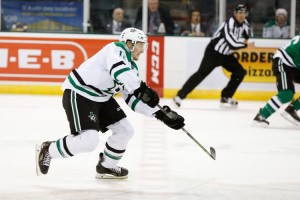 The differential in shots on goal is not always an indicator of success, but in this case it describes the Stars’ defensive improvement. Allowing only 17 shots on goal, this is only the second game of the season in which the Stars held their opponents to fewer than 25 shots on goal. Currently, the Dallas Stars’ PDO (the team’s overall shooting percentage, plus the overall save percentage) stands at 99.3. The PDO for this game was 107.9, while the Canadiens notched 95.2. While this is only one game, these numbers are much higher or lower than current averages, and the differential between each team’s efforts are evident in this important statistic.

The Stars, like many teams heavy with talent, tend to over-think the play. Getting too cute stands in the way of getting shots on goal. In their last win, the Stars instead took every opportunity to throw the puck at the net. The frequency of Fenwick events proved a shortcoming for the Stars early in the season, as evidenced by their last-place ranking in the league’s Fenwick For percentage on the 5 on 4 power play. In November, they averaged 1:40 between shots on goal during the power play, and approximately 1:15 between each Fenwick event.

With low shooting frequency, the Stars were not setting themselves up for success. Per Mike Heika of the Dallas Morning News, Tyler Seguin began looking to balance frequency with finesse, “I think I’ve been shooting the puck more than I have in the past instead of thinking to make that pretty ‘tic-tac-toe’ play. It’s been working out.” With his newfound balance and shot attempts, Seguin scored two goals to lead the league in both points and goals scored for the first time this season.

In their previous four losses, the Stars habitually took more penalties than the opposition. In the 5-2 steamrolling at the hands of the Colorado Avalanche, the Stars spent 19% of the 60 minute game on the penalty kill. Even the best penalty kill is no recipe for success, and the Stars did little to improve this statistic. In Toronto, the team spent approximately 17% of the game shorthanded, resulting in a 5-3 loss. In the ensuing 5-2 loss to Detroit, the Stars finally made some progress. The score looked bad, but the team achieved depth scoring from snake-bitten, Colton Sceviour, as well as their first power play goal in four games.

In the win, the Stars took three penalties; one each to veteran forwards, Shawn Horcoff and Erik Cole, and an embellishment penalty to Ryan Garbutt. Oddly, Garbutt was not assessed a penalty after making contact with Mike Weaver’s head in the first period. Recent games saw the dogged winger commit unnecessary infractions that hindered the team’s momentum, much to head coach, Lindy Ruff’s frustration. Garbutt showed unusual restraint in this game, even as Brandon Prust attempted to engage him in the second period.

Overall, the winger drew three penalties on the Canadiens before earning matching penalties with Alexei Emelin late in the second. Naturally, Garbutt’s patience proved fruitful, as Ruff rewarded him with 15:28 TOI, during which he scored an empty net goal. The increase comes only one game after Ruff benched him during the second period against Detroit, leaving Garbutt with only 5:04 in the game. With that noted, the Stars’ other usual suspect, Antoine Roussel, was also quiet in recent games, falling to 5th place overall in league penalty minutes.

Just past the first quarter of the season, the Stars needed to play a complete game to prove that they can endure over the most competitive teams in the league. This is not to say that the Canadiens were not already at a disadvantage when they arrived for the final game of a road trip, playing on back-to-back nights, but the Stars’ play remained unrelenting. The most important takeaway is that they succeeded as a team, never losing control, and powering through a habitually problematic third period. As the Dallas Stars attempt to piece together a 200-foot game versus the Winnipeg Jets tonight, they will have to overcome their significant struggles with puck possession and special teams in order to make another push to the playoffs.