Though 1 Loss, 1 SO Loss and 1 Win might not look like a great World Junior’s record,  the Swiss are getting a lot of media coverage for their play and a lot of scouting attention for their young stars, many of whom are eligible for the NHL entry draft in June.

Manuele Celio’s team started the tournament with a 3-0 loss against a strong Russian side, not a terrible performance if you consider the 14-0 domination of the Russian squad against the Latvian’s on Dec 29. With a bit of luck, Switzerland could have made the final result a bit closer with Plymouth’s Swiss captain Dario Trutmann and Bern’s Christoph Bertschy both coming close to scoring. The 3-0 loss against a Russian side that is yet to defeated was a good learning curve for the Swiss and prepared them well for the next 2 games. 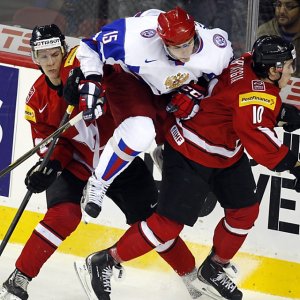 Despite being the heavy underdogs, Switzerland rallied back against a star-studded Swedish team, scoring 2 late goals and tieing the game at 3-3 after 60 mins. After Ludvig Rensfeldt’s goal made the score 3-1 with 18 mins left in the third period, most people would have counted out the Swiss but Joel Vermin’s goal on a 2-man advantage with 7 mins left and then Defenceman Dean Kukan, who ironically plays for Lulea in the Swedish Elitserien, undressed the Swedish defence and shot the puck into the net with 2 minutes remaining to tie the game. Though eventually losing the shoot-out and the game 4-3, the Swiss showed their ability and hunger to win to the Alberta crowd.

Switzerland were finally considered favorites for a game and did not disappoint against a decent Latvia line-up. Forwards Gaëtan Haas and Christoph Bertschy, who play for Biel and Bern in the Swiss NLA respectively, scored two goals each with Christian Marti of the Kloten Flyers scoring a single in a 5-3 victory. Goaltender Tim Wolf had a strong game as GCK teammate Lukas Meili did against the Swedes, a goaltending duel which should provide plenty of controversy on who gets to start the next game against Slovakia.

Group A sets up any interesting game for the Swiss against the Slovakian’s later today. With Russia and Sweden already advancing, the winner of the Switzerland vs Slovakia game will take 3rd spot in the group and advance to the quarter-finals. While realistically the Swiss have little chance of winning the tournament, they would be very happy in defeating the Slovak’s and placing in the top 6 of junior hockey, proving to the world one again that the small country of Switzerland is a force to be reckoned with in all aspects of the great game.

The Spengler Cup is annual Hockey tournament held in the Swiss mountain town of Davos. Known as being one the oldest invitational hockey tournaments in the world, the Spengler cup in played in the holiday period between Christmas and New Year’s.

HC Davos and Team Canada are two regular team’s in the tournament with Team Canada consisting of a pick of the best Canadian players available in Europe. Marc Crawford was the coach of  Team Canada in 2011 and ex-NHL players on the Team Canada squad included Marty Turco, Joel Perrault, Ryan Parent and Glen Metropolit. 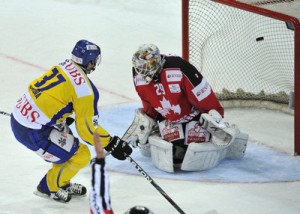 With the previous 4 winners of the Spengler Cup being St Petersburg, Dinamo Minsk, Dynamo Moscow and Team Canada, HC Davos were the first Swiss team to win the Spengler Cup since 2006. Davos defeated Dinamo Riga 3-2 in the final on December 31st at the Valliant Arena in front of 6500 spectators. It was HC Davos’s 15th title in history, a tournament record for the former team of Joe Thornton, Niklas Hagman and Rick Nash during the lockout.