Fighting for the Finals

It had been well documented how Henrik Lundqvist, dubbed The King by his legions of followers, had never lost a Game 7 at Madison Square Garden.  King Henry was 7-0 in his career in do-or-die, win or go home, final game eliminations. 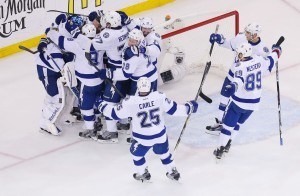 It was a daunting task facing the Tampa Bay Lightning as they headed to New York to slay this dragon.  The odds makers in Las Vegas, the New York Media and the expected rough and loud crowd at MSG all awaited these young lads from the Sunshine State. How in the world could they climb this Everest?  Simple really, as explained by Coach Jon Cooper, “We’re young and dumb and don’t know any better”.  Not sure if this is brilliant coaching, or just the blind squirrel finding a nut theory.

So as Game 7 of the Eastern Conference Final played on, the Tampa “Young & Dumbs” kept pace with the New York Kings, going as expected for most of the game.  Some highlight reel saves by Lundqvist with Ben Bishop matching him save for save.

There were big defensive plays from both teams, a couple of good scoring chances on both sides and the referees swallowing their whistles for the most part until two-second period calls.  A questionable hooking call on Brenden Morrow and a laughable call of too many men on the ice gave New York a couple of power plays that were unsuccessful, keeping the game scoreless through two periods.

In March of 2014 a blockbuster trade was made by these two franchises.   It is not hyperbole to use the word blockbuster here.  A trade involving two captains of NHL teams at the trade deadline had never been done in the NHL.  Ryan Callahan for Martin St. Louis was as big a trade that has ever happened, and certainly impacted both of these organizations.

From the Tampa perspective, the bittersweet exit of St. Louis opened the door for the rising superstar of this team, Steven Stamkos, to be named the new team captain.  This is Stammer’s team now.  It may seem like he is a grizzled veteran since he has been in the league since 2008, but Stamkos is still only 25 years old.

The fast skating, don’t blink or you’ll miss something style of play by the Lightning is personified by their leader.  Having witnessed every single NHL game he has played in, there are things I saw this season that would have been hard to imagine from young Mr. Stamkos.

From his takedown of Brad Marchand in a late season game against Boston as Stamkos led the charge to stop a 10 game losing streak to the big, bad Bruins to his physical play throughout the playoffs, Stamkos left little doubt that he was leading his even younger charges to the Cup final.

As the Lightning prepared for this elimination game to determine conference supremacy, they took on an air of cockiness.  Perhaps it was confidence, but you would have to second guess that feeling.  Maybe, they were just being young and dumb as Cooper previously alluded.

They were David facing Goliath in a do-or-die situation, and the game is scheduled to be played in Goliath’s lair.  Talk about home ice advantage.  In that case, maybe being young and dumb is appropriate.

As the game progressed into the final regulation period, uneasiness blanketed the Madison Square Garden crowd.  They had come to watch the King and his Merry Men receive their Prince of Wales Trophy and punch their ticket to a second consecutive Stanley Cup Final.

But the young and dumb Lightning had other thoughts.  When asked, for what probably seemed like the millionth time, about King Henry and the unbeaten Game 7 records, Steven Stamkos declared that Lundqvist and the Rangers had simply never played the Tampa Bay Lightning in any of those Game 7’s.

Okay, so this wasn’t an Ovechkian guarantee, but this was as close as you can get.  No doubt these were the words of someone young, perhaps even naïve, but this was not dumb in the least.  Stamkos, Cooper and the rest of the Tampa brain trust knew exactly what they were doing and saying.

Bishop stood tall; the Tampa defense buckled at times, but never broke.  Alex Killorn and Ondrej Palat were able to sneak a couple past Lundqvist and the Tampa Bay Lightning are the new “Beast in the East”.  The 2-0 victory in the lion’s den captured the second Eastern Conference Championship for the Lightning organization.

After the game, Stamkos showed his youth a bit by describing his sheer excitement to be playing for the Stanley Cup.  A throng of fans met the team plane at 3:30 a.m. at Tampa International Airport to cheer on their boys in blue.

To a man, they are all saying the right things that, while they are happy to be playing for the Cup, they have a lot of work ahead of them.  It begins next Wednesday, but for now, they should enjoy and reflect back on what they accomplished.

They are the first team to beat three Original Six teams in the playoffs.  Detroit in round one, Montreal in round two and now the Rangers in the Eastern Conference Finals, the only thing that would make this achievement even better is if they get an opportunity to meet and beat the Chicago Blackhawks in the Stanley Cup Finals.

Earlier in the playoffs, Cooper was asked about the Triplets Line and proclaimed that “the world is now seeing these guys” Not only is the world seeing this team, they are seeing a young team that has resiliency in their DNA.

The world is seeing that this team can be utterly embarrassed one night, and then shut it down defensively the next.  People are seeing for themselves that this young team that not many people outside the greater Tampa Bay area gave a snowball’s chance to go this deep in the playoffs, do exactly that by earning a spot to play for Lord Stanley’s Cup.

Young and dumb, maybe, but what sticks out to me is what Cooper said after the game was over.  Talking about his players, the coach said, “these guys don’t just play with each other, they play for each other”.

It’s not Vince Lomdardi, but in this day and age of the modern athlete being paid millions of dollars to play a kid’s game, how many teams can you honestly say that about?  How many teammates would lay it all for the guy next to him?  Doesn’t really matter because we are seeing one team that does.

Born in Chicago, Illinois. Grew up playing and loving sports. Spent most of my formative years playing, debating, arguing and talking sports. for the last couple of years I have written about hockey. I am currently a Tampa Bay Lightning contributor for The Hockey Writers. I know that I may not always be right, but I am passionate about hockey and it is damn hard to hide that passion in my writing.