With under two weeks to go until July 1st – the official start of the free agency period in the NHL – Steve Yzerman’s comments on Monday about the Steven Stamkos contract situation have officially shed light on the fact that time is now of the essence.

Whether Stamkos is staying or going, Father Time will force each side’s hand sooner rather than later, and it looks like we will learn a lot about what the future holds for Stamkos and Co. sometime within the next week.

On Monday, Yzerman spoke to the Tampa Bay Times about re-signing Stamkos and how it will ultimately impact the Lightning moving forward. “What we look like if Stammer re-signs with us, it effects what we can do with our team. For us, we’d like to know sooner rather than later.” And Yzerman is certainly right. 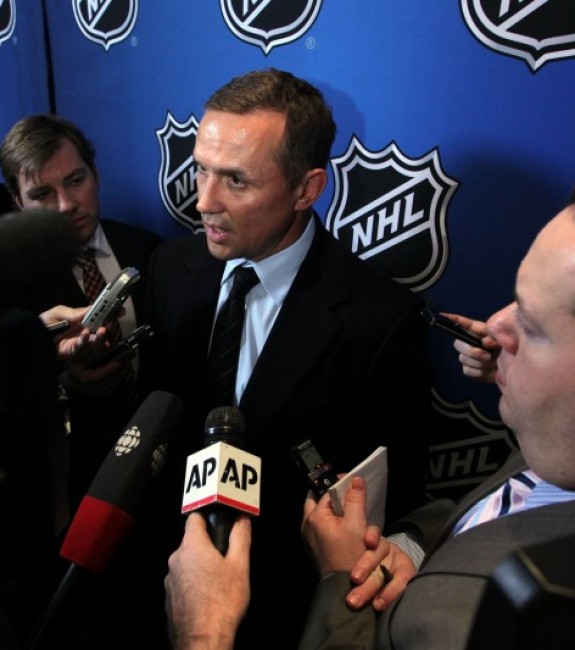 Yzerman and Stamkos have been at the center of the hockey world as Stamkos has remained unsigned to a contract extension on a contract that expires on July 1st. (Brad Penner-USA TODAY Sports)

Regardless of whether Yzerman is able to re-sign Stamkos or not, it will have an effect on every player in the Lightning locker room. For players like Ben Bishop, Jonathan Drouin, Victor Hedman, Tyler Johnson and Ondrej Palat—all of which have contracts set to expire at the end of the 2016-17 season –the “Stamkos Effect” will take on an even bigger meaning, as it will arguably dictate their own futures with the club.

Since he arrived in Tampa Bay, Yzerman has operated with a long-term view for this franchise. Whether it be through trades, free agency, or draft picks, Yzerman has never been willing to wager the future for an immediate return. The same approach will be taken with Stamkos and Yzerman will certainly not compromise the team to hold onto any single player — Stamkos included.

Since before the start of the 2015-16 season, the hockey world paid close attention to the Stamkos contract situation. When an extension was not signed before the start of that season, some placed an arbitrary deadline of the 2015 calendar year. When 2015 came and went, those same people called February 29, the NHL’s trade deadline, the new date by which Stamkos’ future with the Lightning would be known.

Adding to the speculation about Stamkos’ future, the Toronto Maple Leafs were able to trade Dion Phaneuf before February 29. With that trade, the Maple Leafs had done the once unthinkable—shedding the franchise of the massive contracts of Phaneuf and Phil Kessel, who had been traded in the off-season to the Pittsburgh Penguins. With the recently cleared cap space, it became “all but certain” that the Maple Leafs were the odds on favorite to bring in the hometown superstar. However, shortly before the trade deadline Yzerman announced that Stamkos would not be traded, helping to squelch some of the rumors largely viewed as a distraction to the Lightning at that time of the season.

With last week’s early departure of long-time Detroit Red Wings center, Pavel Datsyuk, the Red Wings have now joined the short list of teams that are a potential landing spot for the 26-year-old Stamkos, provided they are able to move Datsyuk’s $7.5 million cap hit for next season.

Ranking the contenders for Steven Stamkos:

Despite all the talk outside of the organization, and there has been no shortage of it, Yzerman and Stamkos have kept a level of privacy and professionalism that speaks to the sort of person each of them is off the ice. Outside of a reported offer of $8.5 million per season (for an unknown term) and a couple of “liked” Tweets from Stamkos’ official Twitter account earlier this season, contract negotiations have been kept nearly silent.

Currently, however, each day brings us closer to learning the future of Stamkos and the Lightning. On Monday, while discussing the Stamkos situation, Yzerman said that he hopes to have a “clear idea of where we are” before this weekend.

A look at the calendar for June marks an important event in the NHL’s off-season set to take place this weekend in Buffalo—the 2016 NHL Entry Draft. Is it possible that we learn the fate of the franchise’s captain by this weekend? If Stamkos knows he is not going to resign with the club, will he waive his no-trade clause and allow Yzerman to trade his rights so that the team receives something for the player?

While the four-time all-star’s future with the Lightning is unknown at this time, there are those that believe he wants to stay with the franchise that drafted him 1st overall in 2008. After all, the Lightning has been to the Eastern Conference Final three times in the last six years.

The franchise has world-class ownership in Jeff Vinik, a strong mix of young talent and productive veterans, and seems to have its best days in front of it. The team was also within two wins from a Stanley Cup in the 2014-15 playoffs. However, the Lightning’s economic situation means that Stamkos must weigh how much all these things are worth to him.

It does not take waiting until July 1st to know that there are teams that will be better positioned financially than the Lightning are to extend the sort of offer sheet that Stamkos may command. What will ultimately decide the center’s future with the Lightning is his willingness to forego those suitors. Then again, no one can blame him if he opts to explore his options. After all, you are only the top unrestricted free agent in hockey once in your career.

While July 1st marks the start of the free agent frenzy in the NHL, it seems possible that Lightning fans will not be waiting until then to learn the future of their captain in Tampa Bay.