Steve Yzerman is currently in his fifth season as the vice president and general manager of the Tampa Bay Lightning after spending the previous 27 years within the Detroit Red Wings Organization as a player and front-office executive. Yzerman completed his playing career after the 2005-06 season, finished second in franchise history in points with 1,755, just 54 points behind Gordie Howe’s 1,809 and filled his trophy case with number of the leagues hardware. 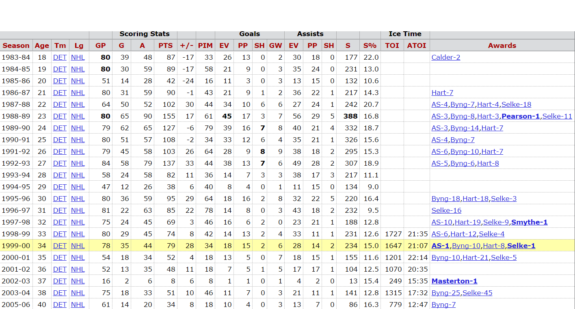 Yzerman began to obtain knowledge and experience in running the front office and assembling rosters during his time as a team vice president and alternate governor (Detroit, 2006), general manager (Team Canada, 2007) and executive director (Team Canada, 2009).

In 2010, the Tampa Bay Lightning had a new owner in Jeff Vinik and he sought after Yzerman to become the team’s new team vice-president and general manager and reported directly to Vinik. Being a part of such a successful organization in Detroit and leaving his mark in the National Hockey League as one of the best players to ever step out on to the ice, Yzerman brought experience and knowledge of what it takes to build a successful hockey club.

His focus on building around the existing core players, adding pieces through trade or via free agency while using the draft to develop homegrown players through the system he helped build to become successful at the NHL level. We’ve seen him sign key players, make a move for goaltender Dwayne Roloson that helped lead this team to the Eastern Conference Finals in 2011, make a deal with the Ottawa Senators to bring in Ben Bishop and last year manage a situation with Martin St. Louis that wanted a trade to the New York Rangers.

Over the last two seasons we have started to see what the Yzerman effect looks like in Tampa Bay. One of the best examples might just be that of the Lightning’s second line made up of the undrafted Tyler Johnson, the 2011 second round pick of Nikita Kucherov and late seventh rounder in 2011 Ondrej Palat who finished with a combined 199 points during the 2014-15 regular season. The players from the 2011 draft are starting to surface at the NHL level with other players as well like Vladislav Namestnikov at forward and Nikita Nesterov on the blue line that have really stepped up in time of need when dealing with injuries. Yzerman and his team of scouts have done a great job rebuilding the lost depth at the AHL level and the draft will remain a key area of focus to ensure that this team is built for many years as the existing young players of this Lightning team continue grow and contribute at the NHL level at a high level.

The players selected in the 2012 draft have popped up, just look at Tampa Bay’s backup goaltender, Andrei Vasilevskiy. After the departure of Evgeni Nabokov, Vasilevskiy, 20, appeared in 16 regular season games, posted a 7-5-1 record along with a 2.36 goal-against average and .918 save percentage. Forward Cedric Paquette was another contributor we saw step up this year tallying 19 points (12 goals, 7 assists) which included his first career hat trick against the Red Wings back on January 29th.

The depth this team has at each position allows for those players to step up when called upon whether that is due to injury or to earn an available spot on the roster. This on-going trend within this organization should present opportunities to be a contender for years to come just as Yzerman experienced during his time in Detroit.

The Tampa Bay Lightning are entering the Stanley Cup Playoffs for the third time in five years and in the first round will be matched up against Yzerman’s former club, the Detroit Red Wings who are making their 24th consecutive postseason appearance.

For the Lightning, this season has included a number of new franchise records including home wins in a season (32), total wins in a season (50), points in a season (108), and wins by a goaltender (Bishop, 40) while clinching a playoff berth in the 2015 Stanley Cup Playoffs. Last year, Tampa Bay was swept in the first round by the Montreal Canadiens without the help of Bishop who was out with an injury that resulted in Anders Lindback playing between the pipes, in addition to the lack of playoff experience among most of the players throughout the lineup.

Looking ahead to the matchup with Detroit is interesting for many reasons and the obvious one is the Yzerman connection but that doesn’t play much into how the series is going to go. Heading into this matchup that begins on Thursday night there are many differences between last year’s playoff team and this year’s. For one, the Lightning will have Bishop healthy, but he has not appeared in a playoff game before and sure it’s a different animal in the playoffs, there will be nerves and adrenaline flowing but once he makes his first save, he’ll be able to settle those nerves, play with his ability to track the puck, and use his size to take up as much of the net as possible as he has this season.

Speaking of experience, this team now has another year of playoff experience despite the short four games they appeared in against Montreal, but this team also has veteran leadership who has been there before with Brenden Morrow, Brian Boyle, and Anton Stralman who they didn’t have last season.

They also hope to have Braydon Coburn, who was acquired from Philadelphia at the trade deadline, available for game one in addition to defenseman Andrej Sustr and forward Alex Killorn.

Killorn and Sustr both say they’re pushing to be ready for Game 1 of the First Round series against Detroit. #TBLightning

Tampa Bay has the ability to score goals as they led the league in goals per game with 3.16 during the regular season, we saw their powerplay come to life toward end of season. In addition, they have done a better job of keeping the puck out of their own net, producing a top 10 penalty kill unit. The importance of playing just as well away from the puck as they do with the puck will remain a key part of their game as well as maintaining their ability to possess the puck and create scoring chances. 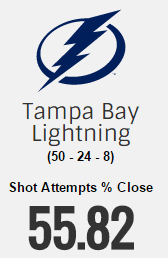 This season, just making the playoffs will not be satisfactory for the Lightning. Yes, they had a great regular season and it should be reflected upon but now it’s time for the second season, it’s time to make some noise; it’s time to raise the level of intensity, it’s the time of year for them to give it all they got and chase down the Stanley Cup.

Danny has been covering the Tampa Bay Lightning for the last five years providing team news and analysis. In addition, he has made numerous appearances as a guest on TSN Radio (Montreal), CBS Radio (Tampa).