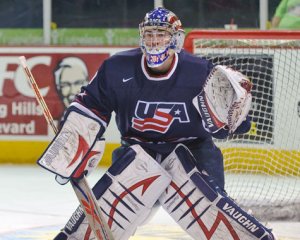 Team USA successfully extended their winning streak to three games Monday with a 4-2 win over Russia. In a contest that featured two undefeated clubs, it was the underdog Americans that emerged victorious over Russia’s NHL-filled roster (featuring Vladimir Tarasenko, Evgeni Malkin, and Sergei Bobrovsky). Jack Campbell, who was filling in for Connor Hellebuyck, was fantastic in net, and Seth Jones registered two assists en route to a United States win.

Team Russia entered the contest as one of the best first period teams in the tournament. Over their first two games, they scored an astounding seven goals in the opening frame. However, it was Team USA who got on the board first with a goal by Trevor Lewis just 6:22 into the period.

The Americans would get an opportunity to go up 2-0 on the Russian squad when they were granted a power play with less than five minutes left in the first. However, they were unable to convert or generate any serious scoring chances.

With under a minute to go, Team USA failed to clear the zone, which allowed Russia to pressure the young Americans and forced defenseman Justin Faulk to take a penalty. Fortunately, the men in blue survived being a man down until the buzzer rang and sent the teams to their locker rooms.

Although the United States successfully killed the Faulk penalty, Russia was able to even the score at the 3:40 mark of the second period. During a net-bound scramble, the puck got kicked out to Anton Belov waiting at the point while chaos took place in the crease. Belov made no mistake and rifled a shot past a scrambling Campbell to tie the game.

Less than two minutes later, the Russians took two consecutive penalties to give Team USA a five-on-three advantage. The US did not squander the opportunity as defenseman Torey Krug snapped a shot high glove-side passed Bobrovsky. This occurred just seconds after Seth Jones raced to keep the puck in at the line along the right-wing boards. The Americans now had a 2-1 lead.

Team Russia looked to have tied the game with 7:29 remaining in the second after the puck was pushed into the net with traffic in front. However, the referee had blown the whistle prior to the puck crossing the line, effectively disallowing the tally.

After killing a holding penalty by Zach Redmond late in the frame, Team USA successfully took their 2-1 lead into the third period.

Frustrations started to mount for the Russians early in the third, causing them to play a chippy game. This was demonstrated by a confrontation between Matt Hendricks and Tarasenko that saw some bumps and words trades. The physicality of the contest remained high for a couple of minutes after the exchange.

Despite Team Russia having better possession in the final period, Mark Arcobello was able to give the Americans an insurance goal at the 11:52 mark. After a neutral zone faceoff, Arcobello carried the puck into the offensive zone and put a shot passed the Russian netminder. This important goal took some pressure off of the US team and transferred it over to a desperate Russian squad.

After securing the two-goal lead, Team USA focused heavily on their defensive play. They stopped zone entries, got the puck deep, and made disciplined changes. They were content with trying to hold on to their lead throughout the remainder of regulation.

Russia, though, escalated the intensity of the game and managed to score with 3:41 left. A partial two-on-one saw a cross-ice pass deflect off of Jones and passed Campbell into the net. This made things interesting because the American’s lead had been cut to one, and there was still plenty of time to score a game-tying goal.

Fortunately, the United States would not allow another goal. They survived an onslaught of Russian chances and managed to get an empty netter with second left in the game. Team USA defeated Russia by a score of 4-2.