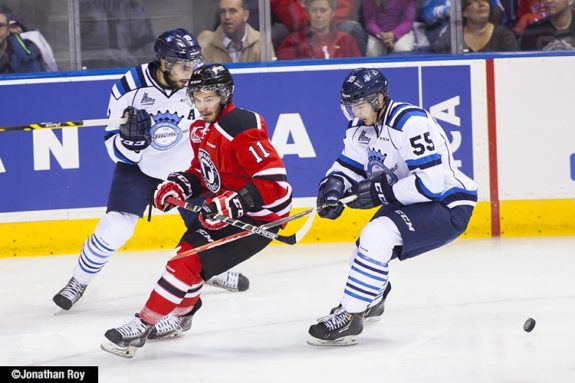 One of the most intriguing prospects I’ve watched this season was Chicoutimi’s Nicolas Roy. He’s slicker than your average 6’4” center and likes to plug himself into areas where he’ll have a high percentage scoring opportunity. Since last season he’s gained about 10-15 pounds, but he’s still somewhat lanky.

It’s tough for big men to move their feet quickly, but luckily Roy has a deceptive set of hands, which takes attention away from his lack of speed and agility. This season he was given ample opportunities on the powerplay, where he thrived in the middle of the offensive zone. Roy relies heavily on board play and cycling the puck for scoring chances and that style seemed to work for Roy as the season progressed.

A north-south player, Roy is a strong forechecker and his imposing size makes opponents uneasy. As a center in the NHL, you have to be proficient on both sides of the puck, and while Roy showed nice defensive tendencies throughout the year, there were times where he was inconsistent and focused too much on rushing the puck up ice. The mixture of size and skill always seems to fall in favor with NHL scouts, but I don’t see on overly offensive game from Nicolas Roy. Able to play center and right wing, he’s best suited in a 3rd line role when he makes it to the professional level.

Nicolas Roy could squeeze into the late 2nd round, but a 3rd round selection is likely where he will get picked.

“A big power forward in the making…shows excellent strength and poise with the puck…distributes well from the around the offensive zone…shows off tremendous vision and passing skill…has a very strong stride and is hard to knock off the puck…uses his size and strength to win pucks along the boards and protect it around the outside…possesses a strong shot…forechecks hard and aggressively, and plays with plenty of grit…solid defensively as he gets involved and plays strong in his own end…uses his stick and his size well on the boards…always in good supporting position…raw, but high-end, two-way upside. (August 2014)”

“Tall rangy centre-forward excellent agility, quickness, skill, and hands. Is poised while in possession, due to his incredibly long reach. Far from an accomplished junior score but has all the attributes that point to him developing as an excellent pro. His feet are what surprises you, how he light he seems and how easily he can bounce from contact to the area the puck is. He crashes the front and his reach gives him advantages. Set up the screen, and uses his size to make plays. Is used as a centre in junior and it gives him more space to work in the offensive end. His work in the defensive aspects is immature and a work in progress. He may project as winger later on.“

Nicolas Roy has played on four different occasions for Team Canada, winning a U18 bronze medal and a gold medal in the Ivan Hlinka Tournament.

3rd line two-way center with offensive upside and can be used on the powerplay.