In Part I of The ‘Canes Captains: 14 Franchise Leaders, we explored team captains from 1992 through the present. Here is Part II:

Ron Francis (1985-90) For most fans, Francis was the franchise while in Hartford.  And he almost wasn’t a Whaler. Howard Baldwin and his staff had intended to select Bobby Carpenter, who was picked third overall by Washington in the 1981 Draft.  Francis had been their back-up plan, who ended up going to Hartford as the fourth overall pick.  While Carpenter would go on to play in 1178 NHL games, Francis became a legend, wining two Cups, and posting 1798 points (529 g, 1249 a) in 1731 games.  He is second on the all time career assists list (behind only Wayne Gretzky), and third on the all time games played list (behind only fellow Whaler Gordie Howe and Mark Messier).  During the 1991 season, a rift between management and Francis emerged, and Francis was shipped out of town in one of the worst trades in NHL history.  On March 4, 1991, Francis was traded along with Grant Jennings and Ulf Samuelsson to Pittsburgh Penguins for John Cullen, Jeff Parker and Zarley Zalapski.  Francis and Samuelsson went on to win two Cups in Pittsburgh, while Hartford never recovered from this one-sided swap.

Mark Johnson (1983–85) Johnson was part of the U.S. Olympic Team, winning the gold medal with Herb Brooks in Lake Placid, New York in 1980.  In addition to the Whalers, he would also play 669 NHL games for the Pittsburgh Penguins, Minnesota North Stars, St. Louis Blues and New Jersey Devils.

Dave Keon (1981–82) While this Hall of Famer is known best for his decades of All-Star play with the Toronto Maple Leafs, Keon extended his career in the World Hockey Association. He had previously served as captain in Toronto form 1969–75. By the time of the NHL/WHA merger rolled around in 1979, Keon had been playing alongside the likes of Howe and Bobby Hull in Hartford and would jump back to the NHL for two more seasons. He would captain the Whalers in his final campaign at the age of 41 before retiring in 1982 with 986 points in 1296 NHL games, and 291 points in 301 WHA games.

Mike Rogers (1980–81) Rogers began his career in the WHA, playing for both the Edmonton Oilers and New England Whalers. After the merger, Rogers would make the jump to the NHL, playing for the Whalers, New York Rangers and Oilers. He would represent the franchise in the 1981 All Star Game. 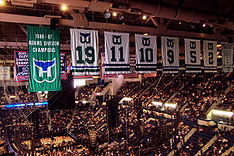 Ted Green (1972–75) As the franchise’s first captain, Green set the bar high, winning an Avco Cup with the New England Whalers in 1973. And a year earlier, he had won the Stanley Cup with the Boston Bruins in 1972. Green had played 11 seasons in the NHL, but made the jump to the WHA for its inaugural season. He would play for the Whalers and Winnipeg Jets through the end of the renegade league in 1979. Ironically, his Jets would defeat the Whalers in the WHA finals in 1978.

Dan Canavan is an attorney in Hartford, Connecticut. Dan regularly covers business and legal issues facing the hockey industry for ctsportslaw.com. He has appeared as an on-air guest with regard to the NHL and the Phoenix Coyotes bankruptcy proceedings on CBC Radio’s World Report. His analysis and commentary have also been published in various media outlets including The National Post, The Windsor Star, The Star Phoenix, The Montreal Gazette, The Edmonton Journal, The Ottawa Citizen, The Vancouver Sun, The Province, Faceoff.com, and the Sports Litigation Alert. You can follow Dan on Twitter at twitter.com/DanielRCanavan. Dan can be contacted directly at dcanavan@ctsportsgroup.com.