After a debate that has raged since the Winnipeg Jets left Atlanta over the summer, the NHL Board of Governors approved a new four-conference alignment by a 26-4 vote on Monday night at Pebble Beach in California. The move still has to be ratified by the NHLPA, but that seems like a formality at this point as the league steams toward its biggest shift in divisional makeup in quite some time.

For the sake of context, here are the new divisions:

Division I (The Snowbird Conference)

Division IV (The Hey, We’re In the League Too! Conference)

And here is a map for your convenience (property of Raw Charge): 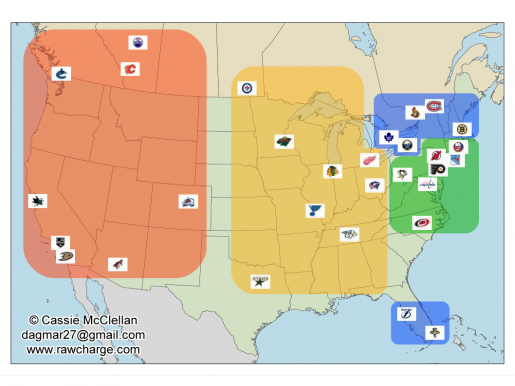 As for playoff seeding, the only thing known for sure is that the first two rounds of the playoffs will be divisional, and then it gets a little trickier. One iteration has the four conference winners getting seeded 1-4 for the third round, and then those two series winners will play each other in the Stanley Cup Final. Another possibility is that the two Eastern Conferences will get their champions and play each other, and the same thing will happen in the West. If the former ends up being the way the league goes, it would be possible to have an all-west or an all-east final, which the league may not want because of national TV ratings concerns. The latter would ensure an East-West matchup, but would make the road for an Eastern team easier because of the imbalance in number of teams.

Even with that uncertainty surrounding the final two rounds of the playoffs, this alignment has to be considered a success from the league’s perspective. They didn’t take the coward’s way out and just move Detroit or Columbus east and Winnipeg west, and they also managed to maintain a lot of important geographical rivalries. The Flyers-Penguins, Red Wings-Blackhawks, and Canadiens-Bruins rivalries are all maintained, and teams like Tampa and Columbus have to be happy because they will still get big draw teams coming through their arenas three times a year.

Speaking of that, the divisional schedule will remain much the same as its current format. Each team will play each team in their conference six times in the two Eastern Conferences, and in the West they will either play five or six times, with the number alternating each year. For the other games, the league has decided to go with a home-and-home schedule for every squad, which was one of the biggest beefs that fans had with the current alignment. Ensuring that Original Six rivals will play at least twice, as well as ensuring that big market clubs will visit every small market club every year was a smart move by the league, and they should be commended for it.

The new home-and-home format also means that teams will have to travel less than they used to. No longer will teams like Detroit and Columbus have to make two road trips to Western Canada and to the west coast, and teams like Vancouver and Los Angeles won’t have to fly out the other way. The reduced travel burden will certainly be a boon for teams looking to cut back on those costs, and the league managed to keep the Red Wings in the West while cutting their travel down, so it’s a win-win in all of those aspects.

Another thing that hasn’t been decided is what to name the new conferences. There are traditionalists who want to return to the days of the Patrick, Adams, Norris, and Smythe Divisions, while others are still in favor of maintaining geographical names to keep things understandable for mainstream fans. What the league ultimately will do is up in the air, but the best option would probably be to name the conferences after more modern players. The four most likely candidates have to include Wayne Gretzky, Bobby Orr, Gordie Howe, and Mario Lemieux, with guys like Mark Messier, Patrick Roy, Terry Sawchuk, and others also being in the mix. In this way, the league could satisfy traditionalists who want to differentiate hockey from other major sports, but would also keep things simple for folks who simply aren’t aware of what men like Conn Smythe and Lester Patrick did for the game.

In truth, there really is only one questionable aspect to this whole thing, and it’s the unbalanced conferences. Obviously, the league has had to deal with this issue before, but in an era where competitive balance is something that every league strives for, are there ulterior motives for the NHL in setting up the alignment like this? Did they set up the two Eastern Conferences with seven teams so that they could switch a team from the West like Phoenix into another conference without having to shake things up again? Is the league pondering setting up two new expansion teams to bring the league to 32 teams? Gary Bettman did admit that the league set things up to accommodate moving franchises, but also stressed that the league isn’t looking at anyone moving.

The league also said on Monday that they are talking to two groups about keeping the Coyotes in Phoenix, but that there is no deadline for getting a deal done.

All in all, there are people who are upset about the new alignment, but the reality is that there is a reason that there were only four GM’s who voted against this proposal. Reduced travel, preservation of rivalries and cash cow games, and home-and-home scheduling are all winning ideas, and those far outweigh any negatives that could be brought up about the new arrangement of teams.

Obviously, we will see which divisions end up being the strongest when next year gets here, but as has been the case more frequently than it used to be, Gary Bettman and the NHL seem to have gotten this one as right as they can. Heading into the new CBA talks in the near future, the league needs points on the board in case things go awry, and this decision will give them just that.

3 thoughts on “The Deed is Done: Thoughts on NHL Realignment”