The city of Detroit and their politics sure have gotten quite a black eye recently with Kwame Kilpatrick and the city becoming the largest North American city to file for bankruptcy. Well, that shiner upon the face of Detroit is swelling back up with the today’s news of the city still backing its plans to replace the Joe Louis Arena with a $444 million arena.

Yes, you heard that correctly. A city with no money is willing to spend on an arena almost half a billion dollars. To me that just sounds asinine.

Supporters of the new Wings arena say that it will bring in money for the city and promote economic development to the struggling city. That’s all fine and good, but when a city is so strapped for cash, a hockey arena should be at the very bottom of the list. Money should be pumped into other resources in the city that need them desperately.

Who Needs a Police Department, Street Lights, or Firefighters Anyway?

On average, Detroit police respond to calls in an hour because they are stretched so thin. One hour!? One hour for an emergency!? That is absolutely frightening and sad. It isn’t the police force’s fault either, they can only do so much with what is given to them. The city of Detroit’s violent crime rate is five times the national average and the highest of any city with a population of 200,000+. If anything, more money should be pumped into the police force.

40% of street lights in the city are shut off to conserve money and the city services are stretched so, so thin. City vehicles are aging and poorly maintained and a power grid that is rapidly deteriorating. Fire stations are “old and not adequately maintained”.

“If you want people to live in the city, and not just visit to go to games, you have to invest in schools, in having the police to respond to calls. There are so many investments that should trump a sports stadium.”

She said it perfectly. I am a huge hockey fan, but no arena for any team should be first priority over education, law enforcement, or the citizens of Detroit.

Let’s go back to the power grid that is deteriorating. By adding a bigger and newer arena that will most assuredly use more power, that will be another strain on a power grid that needs to be upgraded. You have the potential of having blackouts and with a police force that can’t respond quickly due to the city’s situation, that spells disaster.

Lions and Tigers and… Red Wings, Oh My! 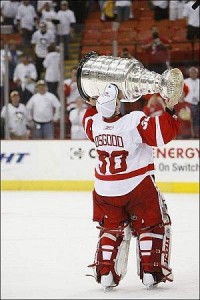 In the late 90s, the Detroit Lions and the Detroit Tigers were the laughingstocks of the NFL and the MLB, yet received new stadiums. Meanwhile, this was the height if the Red Wings resurgence. The Red Wings had won back-to-back Stanley Cups in 1997 and 1998 and were a playoff team every season since 1990, a streak that continues to this day.

If the city of Detroit was willing to give struggling teams, the Lions and the Tigers, a brand new state of the art stadium, they surely would have let the Red Wings build a new arena at that time to cash in on the Red Wings 90s success. Perhaps it was a tad early to talk about a new arena then, but the late 90s were the best chance for the Red Wings to get a new arena and there won’t be a better time to any time soon.

The Red Wings Sell Out

The Detroit Red Wings are a very good team year in and year out. Due to the Wings great play, they rank at the top of the league’s attendance every single season. This past season, Detroit ranked third in average attendance behind the Chicago Blackhawks and the ever popular, Montreal Canadiens. Without a doubt, the Red Wings will be able to sell out its new arena.

The Red Wings are one of a few NHL teams that pull in a profit and it would make sense for them to stay in the city rather than head for the suburbs like the Detroit Pistons have done by going to nearby Auburn Hills.

If the Wings do sell out every game, it would provide an economic boon to a cash strapped city.

The current arena, Joe Louis Arena, is the fourth oldest arena in the NHL behind the Edmonton Oilers, New York Islanders, and New York Rangers. The Oilers and Islanders are both moving to new places in the near future and the Rangers might have to move in ten years due to a recent decision by the New York City Council. So, the Red Wings definitely need a new arena to keep up with the Jones’, but…

How Exactly is it Being Funded?

If a city wants a new arena for it’s hockey team, yet has no money, how do you fund it? Why ask the taxpayers of course!

The arena will be funded using $284 million in tax dollars. That is money that could be used elsewhere in this dire time of Detroit. Neil DeMause, author of “Field of Schemes”, said about the taxpayer plan,

“You’ve got this city that can’t even afford to keep streetlights on, that’s talking about selling off its art museum, and here they’re talking about giving anywhere between $150 million and $300 million to the Red Wings for a new arena,”

I understand that not every arena or stadium can be 100% privately funded, it’s borderline impossible, but asking the taxpayers of a city in so much debt seems a bit inappropriate right now. A new arena is needed, I’ll give you that, but you just simply cannot ask the taxpayers to fund something as trivial as a hockey arena when schools and the police force need money the most.

If you have to do something about the Red Wings playing conditions right now, then go and use the cheaper route and renovate Joe Louis Arena. Although, that is not needed in this desperate times right now.

Do you think the city of Detroit should hold off on constructing a new hockey arena? Comment below or send me a Tweet, @MarkWGraham