A new season brought a lot of changes to both the Calgary Flames and the Vancouver Canucks, but when two teams played against each other for the Flames’ home opener on Wednesday night, one thing remained the same, and that thing was a Vancouver victory.
The Flames faced off against their division rivals five times last season, and all five games resulted in a loss. This season, although with a more promising-looking roster, the Flames’ hapless luck against the Canucks continued.
Calgary came out strong, dominating the visiting team and successfully managing to stay out of their own zone for the first half of the opening frame. But it was Canucks winger Alex Burrows who drew first blood, scoring a powerplay goal on a Paul Byron hooking penalty just past the period’s midway mark. From then it was Hiller vs. Miller, with each new goalie stopping nine and thirteen shots throughout the first, respectively.
Paul Byron made up for his costly penalty by evening up the scoreboard shortly into the second, but Vancouver quickly regained the lead with a slapshot courtesy of Zack Kassian.
Radim Vrbata widened the gap at 11:07 with a tip-in assisted by the Sedin twins, but minutes later Jiri Hudler answered back with a sharp snapshot to close out the second with the Flames trailing by one.
Though Calgary had a slight edge in shots on goal throughout the final frame, neither team managed to beat the opposing goalie. With a desperate push to tie the game with 1:16 left to play, the Flames pulled Hiller for the extra attacker. However, on a faceoff won by Brad Richardson against Mikael Backlund, the puck found its way onto Henrik Sedin’s stick and into the home team’s’ empty net.
The Flames dropped their first game of the season to the Canucks 4-2.

With no time to dwell on the disappointing home opener loss, the Flames were right back at it the next day against their other division rivals, the Edmonton Oilers.
It was a special night at Rexall Place, with the Oilers celebrating the 30th anniversary of their first championship. In attendance were much of the 1984 winning team, including hockey greats Wayne Gretzky and Mark Messier.
Unfortunately, the party in Oil Country was spoiled by homegrown Albertan and recent acquisition by the Flames, Mason Raymond.
Less than five minutes into the first period, Raymond tipped in an initial shot by Mark Giordano, giving the Flames an early lead. Exactly one minute later, Jiri Hudler nabbed his second goal in as many games, doubling up the score on the boys in blue.
It was Oilers newcomer Teddy Purcell who finally managed to lift the mood in Rexall, delivering a snapshot to cut the deficit in half with just under ten minutes to go in the first.
The second period produced only one goal, this one coming from Taylor Hall on an Oilers powerplay. Following a tripping call to Matt Stajan, Hall took a feed from Ryan Nugent-Hopkins and sent a slapper past Karri Ramo to knot the game at 2-2.
The final 20 minutes was then taken over by Mason Raymond, who took the opportunity to score two unanswered goals, ten minutes apart. Joe Colborne assisted on both (as well as on Raymond’s first goal of the night) and the pair’s combined six-point night sealed the Oilers’ fate.
For good measure, defenseman TJ Brodie potted a powerplay goal with 40 seconds left on the game clock.
The Flames burned the Oil 5-2. 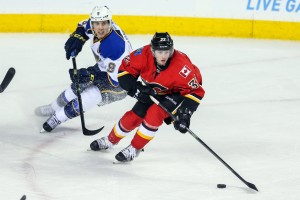 Maybe it was the fact that the Flames were playing their third game in four nights, or maybe it was the fact that their opponent was the ever-improving St. Louis Blues. Either way, the combination of a tired visiting team and a dominant home team resulted in a bad night for the Calgary Flames.
Blues centerman Joakim Lindstrom wasted no time setting the pace for the Blues, scoring the first goal of the game 48 seconds in. Just shy of the halfway point in the first, David Backes added to the lead, with the assist going to former Colorado Avalanche Paul Stastny (his second of the night and third of the season so far).
Stastny’s helping hands didn’t stop there, as he provided Alex Pietrangelo with the puck minutes into the second to bring the Blues’ lead to 3-0.
In his second regular season game as a Flame, Jonas Hiller seemed to have no luck stopping the puck as the night progressed. Vladimir Tarasenko’s slapper at 7:10 in the third was the ninth goal Hiller has allowed since donning the flaming ‘C.’
On the man advantage from a penalty to Kevin Shattenkirk, Curtis Glencross managed to spoil goaltender Brian Elliott’s bid for his first shutout of the season, but it was (way) too little (way) too late. The Flames’ only goal of the night came with less than five minutes left to play, and the Blues cruised to their first victory of the season with a 4-1 win over the Flames.

The Flames continue their six-game road trip on Tuesday, October 14th against the Nashville Predators.

Stay tuned for Week Two of The Flames Files and follow the Calgary Flames’ progress in the 2014-2015 season.