Alexander Semin is now floating in the KHL. His ship has sunk. Cast off from the Carolina Hurricanes earlier this year, Semin’s ship landed in the harbor of the Montreal Canadiens. There it moored, hoping to find the wind that once filled its sails and take Semin back out to the open seas of greatness.

Sadly, the ship stayed mostly tied to the dock, and when it did head for open water had to be called back. Finally, the good ship Semin has sunk.

Once know for its grace and accuracy and charting its way up and down the ice, the good ship Semin performed admirably for many years. His ship cast of on the frozen waters of the NHL flying the flag of the Washington Capitals in 2002, being taken 13th overall in the draft. The next year Semin showed great promise, scoring 10 goals and 12 assists in 52 games played for the Caps.

Rather than continuing to sail for the Capitals, however, the good ship Semin landed in Russia for two years, playing there as a means to fulfill his Russian military obligation. The Caps tried to bring the ship back through legal means, but were not successful and had to wait for the long trip back across the Atlantic in 2006.

Back in familiar waters, the good ship Semin sailed majestically for six years in Washington. From a low of 42 points to a high of 84, Semin rose in stature to become a respected offensive force across the league. This short-handed goal in 2010 against the Pittsburgh Penguins is vintage Semin:

Even though the waters were smooth on the ice for the good ship Semin, a tempest was brewing on the shore, as tales of poor attitude began to emerge. In 2011, former teammate Matt Bradley was quoted in the Washington Post as saying Semin just didn’t care:

“Former Capitals winger Matt Bradley said in a radio interview Wednesday that ex-teammate Alexander Semin “just doesn’t care,” and that the Russian sniper didn’t show up when Washington needed him in the playoffs.”

The “doesn’t care” persona is one that would surround Semin for the next several years, and eventually land him where he is now, out of the NHL and back playing in Russia.

Down South the good ship Semin was given a chance to rebuild with the Carolina Hurricanes, to try to find the wind that would once more billow its sails and return it to glory. It could be said that it only made it back halfway, as he played okay for the ‘Canes, but did not return to elite status of days gone by.

The Hurricanes paid a hefty price to have the ship in-port. In March of 2013, then ‘Canes president and general manager signed Semin to a five-year extension paying him $7 million per season through 2017-16. At the time Rutherford was full of hope:

“We’re very happy to retain Alex,” said Rutherford. “Alex is an elite player and has been a major contributor to the Hurricanes having a very strong top line.”

Things were bright and the seas looked bright in Carolina. Little did anyone know that Rutherford would leave the good ship Semin to Ron Francis, and that the ship would eventually veer off course yet again. The “doesn’t care” prose would soon be orated about Semin.

In the 2014-15 season, the expensive good ship Semin delivered only six goals and 13 assists to Carolina. The new coach Bill Peters was bereft of knowledge on how to right the ship. He even docked the ship mid-season, inviting Semin to watch from the sidelines. (Read “Hurricanes’ Peters to Alexander Semin: Have a Seat“) Peters told the Raleigh News & Observer at that time,

In other words, a player has to care. The familiar chorus from Washington was now being sung in Raleigh. There were glimpses of the ship’s former glory as seen here in March 2015 against the Edmonton Oilers: 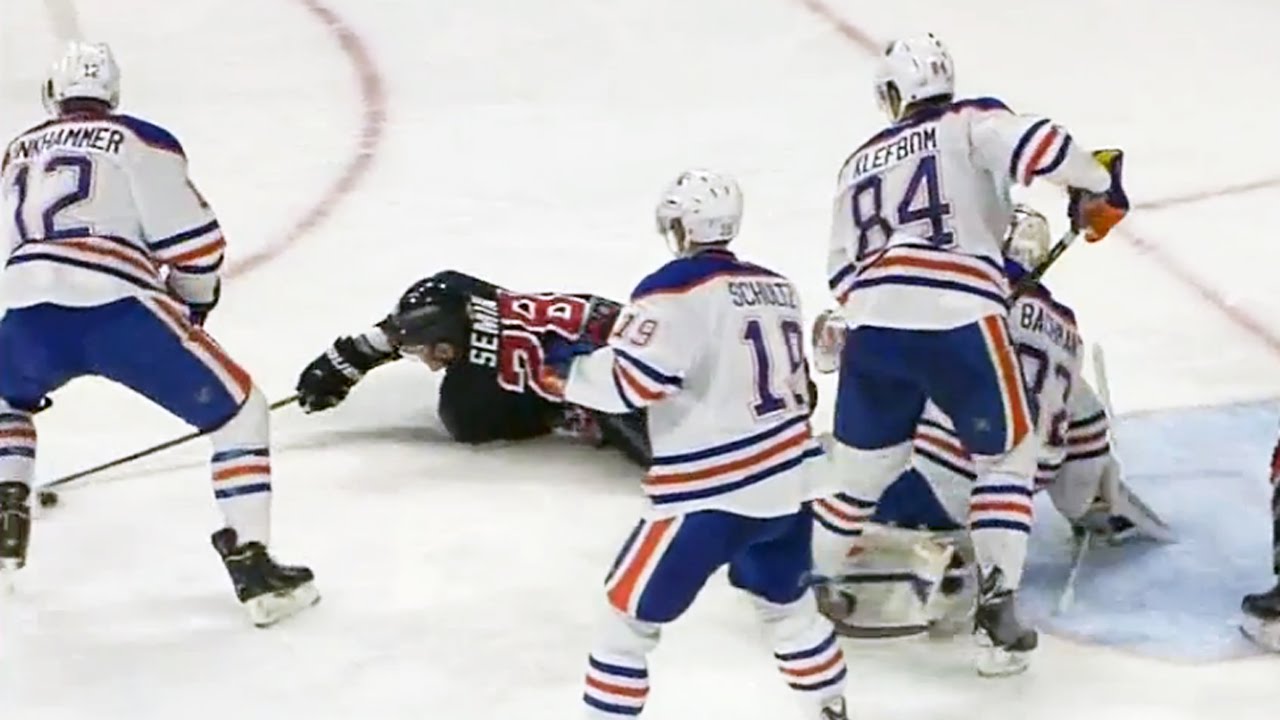 Unfortunately moments like this were rare, and Francis had little choice but to set the good ship sailing once again, its time in Raleigh having been disappointing and expensive.

A break came in July this year, when the Montreal Canadiens invited the good ship Semin to sail north, to bring hope to an offense that needed a boost. Like the Hurricanes before them, the Habs were full of hope, as seen here in the statement by general manager Marc Bergevin on Semin’s signing:

“Alex is a pure goal-scorer with a good shot. We believe his addition to our group of forwards will strengthen our offensive production and our power play. A veteran winger with size, Semin has reached the 20-goal plateau seven times since the beginning of his NHL career 12 years ago. His signing represents a great opportunity for the organization and for Alex’s career.”

Another port of call looking at the good ship Semin with hopes of past glory returning. But, the story would sadly end the same as before. Habs coach Michel Therrien benched Semin several times this season, citing his lack of ability to play at the fast pace that is the Canadiens game. Therrien also said that Semin’s lack of effort was part of his decisions to scratch Semin from the lineup.

On December 8, Hockey Inside Out reported that Semin had cleared waivers, and quoted Therrien as saying,

“It’s about performance. He needs to go back there and work on different things and bring his game to a better level of acceptation that we believe he needs to play in the NHL.”

The good ship Semin had run aground, its sails sagging and its glory days a distant memory. Semin’s one goal and three assists were not enough for him to remain with the team that has a serious opportunity to win the Stanley Cup this season.

Canadiens announced that they have mutually agreed with Alexander Semin and his advisors to terminate his working agreement with the Club.

The ship has sunk in the icy waters of the NHL. It has traversed the Atlantic one again to find a port in the KHL:

What the future now holds is anyone ‘s guess. Will the good ship Semin rest on the bottom of the NHL ocean, only a memory in the lore of NHL glory days gone by? Or will its sails billow once again, with a glorious return to the brilliance and skill believed in by all, but all too often missed in the past four years?

At 31, the good ship Semin could sail again. There is a lot of work to do inside, and what needs to be fixed is something not even Semin could explain when asked what happened to his performance, as I reported at the end of last season with the ‘Canes:

“I don’t know what’s happened with me this year. (long pause) I have nothing to say.”

If Semin doesn’t know, it’s unlikely anyone else will know either. For the ship to sail again, Semin will have to chart its course with purpose and give an effort that says he wants to be an elite player once again. If not, then sadly it may just be that the good ship Semin has sunk. This fan says it all too well: